Palu: Indonesia’s most wanted militant, who had ties to the Islamic State group, has been killed in a jungle shootout with security forces.

Ali Kalora was one of two militants killed in the raid, said Central Sulawesi’s regional military chief Geneneral Farid Makruf. He identified the other suspected extremist as Jaka Ramadan. 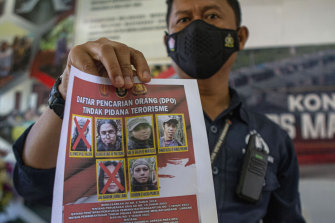 A police officer shows a wanted poster displaying the photos of two militants Ali Kalora, top left, and Jaka Ramadan, bottom left, who were killed during a shootout with security forces.Credit:AP Photo/Mohammad Taufan

“Ali Kalora was the most wanted terrorist and leader of MIT,” Makruf said, referring to the Indonesian acronym of the East Indonesia Mujahideen network, a militant group that pledged allegiance to the Islamic State in 2014.

He said that security forces were searching for four remaining suspected members of the group. 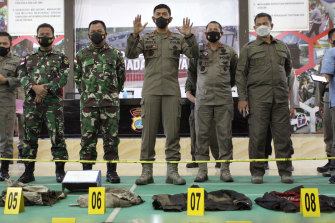 Central Sulawesi Police Chief Rudi Sufariadi, centre, speaks to the media as the items confiscated from Ali Kalora and Jaka Ramadan, two militants who were killed during shootout with security forces, are displayed.Credit:AP Photo/Josua Marunduh

The East Indonesia Mujahideen has claimed responsibility for several killings of police officers and minority Christians.

Security operations in the area have intensified in recent months to try to capture members of the network, targeting Ali Kalora, the group’s leader.

Kalora had eluded capture for more than a decade. He took over from Abu Wardah Santoso, who was killed by security forces in July 2016. Dozens of other leaders and members of the group have been killed or captured since then.

In May, the militants killed four Christians in a village in Poso district, including one who was beheaded. Authorities said the attack was in revenge for the killing in March of two militants, including Santoso’s son.

Makruf said that rugged terrain and darkness have hampered efforts to evacuate the two bodies from the scene of the shootout in the forested village of Astina. He said the bodies of Kalora and his follower will be taken by helicopter on Sunday morning for further investigation and identification.

Indonesia, the world’s most populous Muslim-majority nation, has kept up a crackdown on militants since bombings on the tourist island of Bali in 2002 killed 202 people, mostly foreigners.

Militant attacks on foreigners in Indonesia have been largely replaced in recent years by smaller, less deadly strikes targeting the government, mainly police and anti-terrorism forces, and people militants consider to be infidels, inspired by Islamic State group tactics abroad.