Interest rates may rise even HIGHER than expected next month, Bank of England chief says if inflation is to be beaten

The governor of the Bank of England has suggested interest rates will have to rise higher than previously anticipated in order to cope with inflation.

Andrew Bailey said he ‘would not hesitate’ to increase interest rates in order to meet the inflation target of the central bank, he told a meeting of the International Monetary Fund (IMF) in Washington.

He said: ‘As things stand today, my best guess is that inflationary pressures will require a stronger response than we perhaps thought in August.

The rate of inflation was previously estimated to peak at 11 per cent in October by the bank, Sky News reports.

Mr Bailey added: ‘The MPC (Monetary Policy Committee) will respond to all this news at its next meeting in just under three weeks from now. 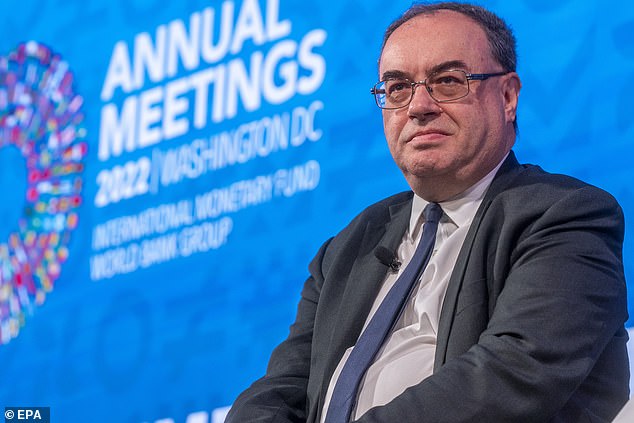 Governor of the Bank of England Andrew Bailey said he ‘would not hesitate’ to increase interest rates in order to meet the inflation target of the central bank, he told a meeting of the International Monetary Fund (IMF) in Washington.

‘This is the correct sequence in my view. We will know the full scope of fiscal policy by then.’

He said the Bank of England will assess the budget announcement of new chancellor Jeremy Hunt’s on October 31.

The BoE is expected to reveal its next directive on interest rates on November 3.

Many analysts believe they will rise from their current level of 2.25 per cent to three per cent or 3.25 per cent, with either move being a far larger increase than usual.

What has happened to mortgage rates?

The mortgages market has had a chaotic fortnight with thousands of deals vanishing from lenders’ offerings amid fears the base rate and interest rates could rocket.

What is the Bank of England base rate?

The rate the Bank of England charges other banks and other lenders when they borrow money is known as the ‘base rate’ and is currently at 2.25 per cent.

This influences the interest rates charged by lenders for mortgages and given on savings accounts – so if the base rate goes up, interest rates will also go up.

Why are interest rates going up?

The Bank of England is trying to get inflation under control at its target rate of 2 per cent. The Office for National Statistics says inflation is currently at about 10 per cent. 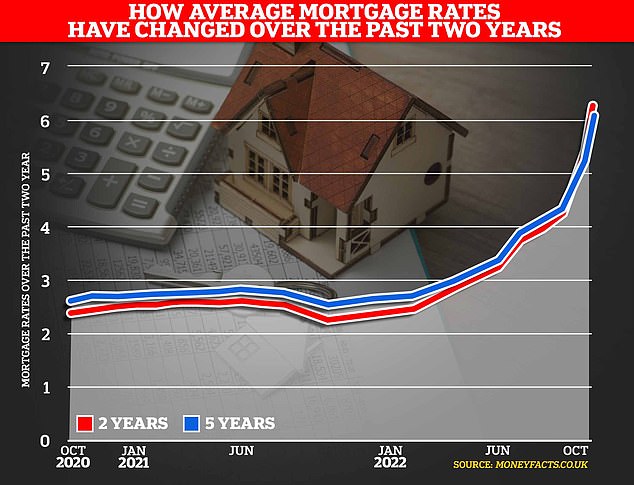 What has happened to the Bank of England base rate?

Interest rates have already been soaring, with the Bank of England hiking the base rate seven times since December from a record-low 0.1 per cent to 2.25 per cent.

Why is inflation still so high?

The main reason for high inflation at the moment is soaring energy costs, with Russia’s invasion of Ukraine in February contributing to a surge in the price of gas.

The conflict has also seen food prices increase significantly, while businesses are charging more for products and services because of increased supplier charges.

Meanwhile employers in Britain are putting up wages to attract applicants because there are more vacancies and fewer people willing to fill them.

The company said today that, across all deposit sizes, the average two-year fixed-rate mortgage on the market is now 6.31 per cent.

This is up from 6.19 per cent last Friday and 4.24 per cent at the start of September.  Two-year fixed rates breached 6 per cent last week for the first time since 2008.

The average five-year fixed-rate mortgage is now 6.19 per cent. Five-year fixed mortgage rates hit 6 per cent last week for the first time since 2010. 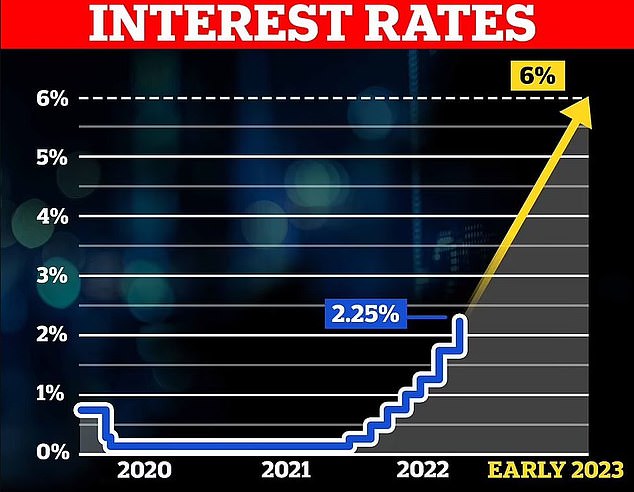 What does the rise in interest rates mean for you?

Moneyfacts calculated that, based on last Thursday’s rates (6.11 per cent for a two-year fix), someone with a £200,000 mortgage, paying it back over 25 years could end up paying around £5,000 per year more for a two-year fixed-rate deal than they would have done last December.

What is happening to the number of mortgages available?

The choice of residential mortgage products is gradually rising, after many deals disappeared as lenders reacted to the market volatility stemming from the mini-budget.

However, there are still around 1,000 fewer mortgage products to choose from than there were on the day of the mini-budget, when the total was 3,961.

More than 40 per cent of home loan deals were withdrawn in the wake of Kwasi Kwarteng’s mini-budget at the end of last month, with 935 removed in one 24-hour period, as lenders struggled to price products in the face of market uncertainty.

How many people are being affected by mortgage rates rises?

The Liberal Democrats put out analysis today suggesting more than 3,000 households are facing ‘staggering hikes’ in their mortgage payments every day.

The party has predicted that between now and November 23, roughly 168,000 more homeowners will have been hit by a new higher rate.

This is based on figures attributed to UK Finance showing 600,000 fixed-rate mortgage deals are coming to an end in the second half of 2022, equivalent to an average of 3,296 a day.

The date of November 23 had been the expected release of Chancellor Kwasi Kwarteng’s medium-term fiscal plan, but this has now been pulled forward to October 31. 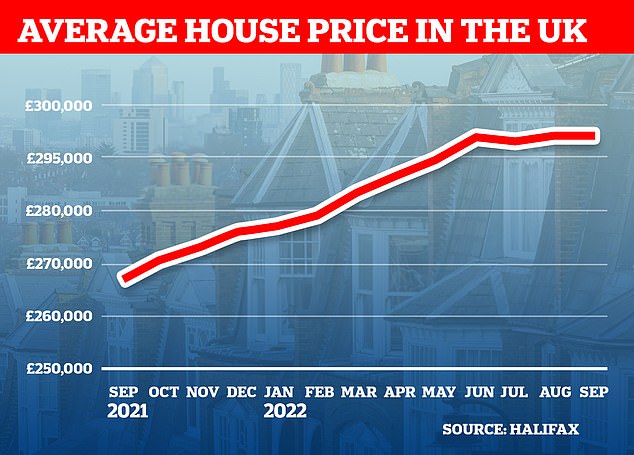 What is the rates rise already doing to house prices?

House prices slipped 0.1 per cent in September, with Halifax warning that spiralling mortgage costs were likely to continue to drive down prices in the months ahead.

But the West Midlands saw the strongest growth in England, with house prices increasing by 13.3 per cent over the past year – compared to 8.1 per cent in London.

What could happen next to house prices?

Fears that the Bank of England interest rate could hit 6 per cent next year has sparked panic among homeowners and lenders.

Experts have warned the fallout could cause house prices to plunge as buyers are forced to put out purchases and families struggle to afford to stay in their homes.

Analysts at Capital Economics said today that house prices will fall around 12 per cent by mid-2024 as a result of the sharp increase in mortgage rates. 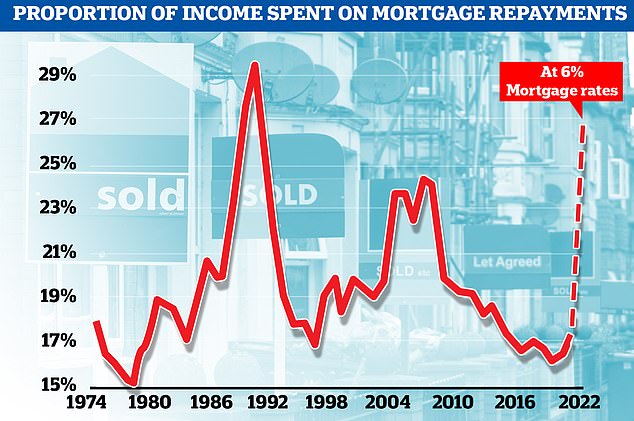 What is happening to actual property sales?

Property sales are also falling through at the fastest rate since the pandemic.

The number of agreed sales that have collapsed before completion reached its highest level since April 2020, data from analyst TwentyCi showed.

More than 29 per cent of sales fell through in September, up from 27 per cent in August.

What should you do if you need to remortgage?

If your fixed rate term is coming to an end within the next six to nine months, you could look into how much it would cost to lock into a new mortgage now.

If interest rates go up further in the coming months as is being predicted by experts, the best deals on the market now could have disappeared by early next year.

It is always worth getting independent financial advice and speaking to a mortgage broker who will be able to help you compare the best available deals.

What if you are buying a home?

If you have a home purchase agreed then you may want to consider securing your rate as soon as you can, so you know what you will have to repay each month.

It is also important to avoid overstretching yourself and planning for house prices to fall because of higher mortgage rates meaning demand in the market could drop.