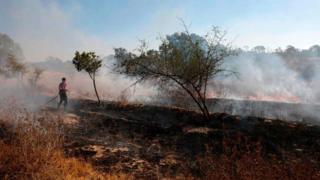 Israeli leaders have warned Hamas that it risks a major escalation in the Gaza Strip by failing to stop cross-border rocket and incendiary balloon attacks.

However, a Hamas spokesman vowed it would “not hesitate to enter battle if Israel’s attacks and siege continue”.

Since last week, a number of rockets have been launched from Gaza along with hundreds of balloons with explosives and incendiary devices attached that have caused dozens of fires in southern Israel.

Israel has responded by bombing what it says are Hamas military targets in Gaza.

Israel has also banned fishing boats from going out to sea and is only allowing humanitarian goods through Gaza’s one commercial crossing.

With no fuel deliveries, the sole power plant in Gaza has shut.

That has left the territory’s population of 1.9 million with about four hours of electricity a day, down from eight hours.

The number of rockets fired from Gaza on Thursday night and early Friday was the largest in 24 hours since the latest round of violence began.

The Israel Defense Forces (IDF) said nine of the 12 projectiles were intercepted.

Israeli media cited emergency services as saying three people were treated for shock after a house in Sderot was damaged by an unexploded rocket, while a woman was hurt while running to safety.

The IDF said it responded by striking a Hamas military compound used for rocket ammunition manufacturing and “underground terror infrastructure” in Gaza.

The Hamas-run health ministry in the territory did not report any casualties.

After being briefed by Israeli commanders on Friday, Mr Gantz said: “The IDF is prepared, defending and will continue to protect the residents of the south, attack those attacking us, and inflict very severe damage on them.”

“The residents of Gaza,” he added, “are suffering because of Hamas.”

Armed Palestinians factions in Gaza, of which Hamas is a part, took joint responsibility for the rocket fire, saying they had “responded and will respond to any attack against the Palestinian people”.

Hamas spokesman Fawzi Barhoum said the group “will not hesitate to fight a battle with the enemy if the escalation continues, if the bombardments and the blockade continue”.

“If the Israeli occupation continues its aggression… it must pay the price,” he added.

Egyptian mediators have had talks in Gaza and Israel on restoring calm.

Analysts say Hamas is trying to pressure Israel to ease its blockade of Gaza and to secure more financial aid from Qatar.

Israel and Egypt imposed a land, sea and air blockade on Gaza when Hamas reinforced its power over the territory in 2007 by ousting its rivals, a year after winning legislative elections. The two countries say the blockade is for self-defence.