At least three Palestinians have been killed in Israeli air raids in the Gaza Strip, according to health officials, in the latest escalation less than 24 hours after a deadly covert Israeli operation in the besieged enclave.

The air strikes on Monday followed a barrage of rocket fire from the Strip into Israel earlier in the day.

Israel said its Iron Dome system intercepted many of the more than 100 missiles fired from the Palestinians. One, however, hit a bus and another struck a building in southern Israel.

Along with the air raids, Israeli artillery units also shelled positions across the enclave.

The rising tensions came as thousands of people took part in rallies in the Hamas-administered enclave following the killing of seven Palestinians – including Nour Baraka, a prominent commander of the al-Qassam Brigades, the armed wing of Hamas – in the secret Israeli military raid on Sunday evening.

One Israeli lieutenant colonel was also killed and another one was seriously injured in the attack.

Hamas leader Ismail Haniya led a funeral for Palestinians killed on Sunday as mourners called for revenge. Later, Palestinian factions said in a joint statement that they had begun firing rockets into Israel in response to the Israeli military incursion.

“Over the past two hours, the Israelis have targeted many resistance training camp and many buildings,” Mukhaimar Abusada, professor at Gaza’s al-Azhar University, told Al Jazeera on Monday evening.

“It seems to me that we are going to witness a very hard night as a result of the ongoing of the Israeli retaliation.” 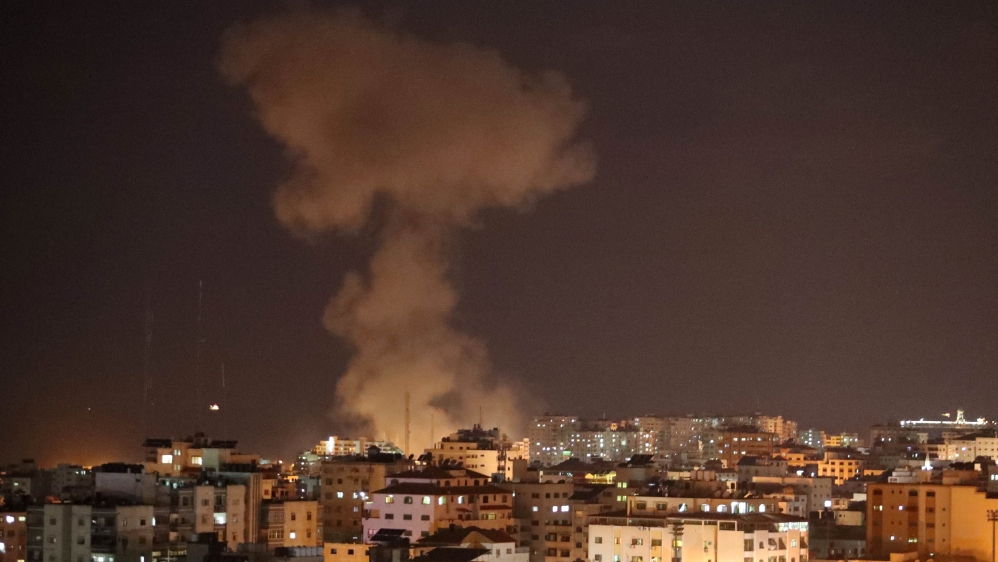 According to Hamas, Israeli undercover forces on Sunday entered the territory in a civilian car and exchanged fire with Hamas gunmen near the city of Khan Younis. A pursuit ensued and witnesses said Israeli aircraft fired dozens of missiles into the area to provide cover for the commandos to escape.

In the immediate aftermath of the raid, several rockets were fired from Gaza as the Israeli forces carried out air raids.

Israel’s army provided few details about the reason for the covert operation. A military spokesperson claimed the operation was “not intended to kill” Hamas commanders, adding the forces faced a “very complex battle”.

The escalation comes in a period where both Hamas and Israel seemed to have moved closer to a truce, mediated by Egypt, the United Nations and Qatar.

Last week, Israel allowed Qatar to deliver aid and fuel worth $15m to poverty-stricken Gaza, which only has a few hours of electricity per day and an unemployment rate of over 50 percent.

“Both sides are calibrating their responses to somewhat satisfy their political constituencies and satisfy the idea that they are responding in forceful enough matter without going too far,” Al Jazeera’s Harry Fawcett, reporting from West Jerusalem, said following the latest escalation.

“What has been extraordinary … is that both Israel and Hamas essentially adopted the same narrative,” he added.

“Israel saying that this was not a targeted assassination attempt which would have been an extremely risky thing to do as well as counter-intuitive at a time when both sides are trying to negotiate a long-time truce deal – rather it was another kind of military operation that went wrong.

“Hamas, on the other hand, said it accepts that explanation, while declaring victory unmasking it and killing one of the people involved in it.”

Abusada, the professor, argued that “Hamas is not interested in another military escalation, but they feel they are under pressure … especially from the other Palestinians resistance groups that there has to be a retaliation against the Israeli raid into the Gaza Strip.”

Israel and Palestinian fighters in Gaza have fought three wars since 2008, and recent months of unrest have raised fears of a fourth.

Violence has flared frequently on the frontier since Palestinians began weekly protests on March 30.

Palestinians in the Gaza Strip have demonstrated along the fence with Israel demanding their right to return to the homes and land their families were expelled from 70 years ago.

They are also demanding an end to Israel’s crippling blockade of the Gaza Strip, which has gutted the coastal enclave’s economy and deprived its two million inhabitants of many basic commodities.

Since the Great March of Return demonstrations began on March 30, more than 200 Palestinians have been killed and thousands more wounded by Israeli troops deployed along the other side of the fence.