Rome: Former Italian Prime Minister Silvio Berlusconi said on Tuesday he was back in touch with Russian President Vladimir Putin and had recently exchanged “sweet letters” with him, according to an audio released by an Italian news agency.

Berlusconi, 86, often boasted of his friendship with Putin until Russia’s invasion of Ukraine, and created a storm last month when he said Putin had been pushed into the war and wanted to put “decent people” in charge of Kyiv. 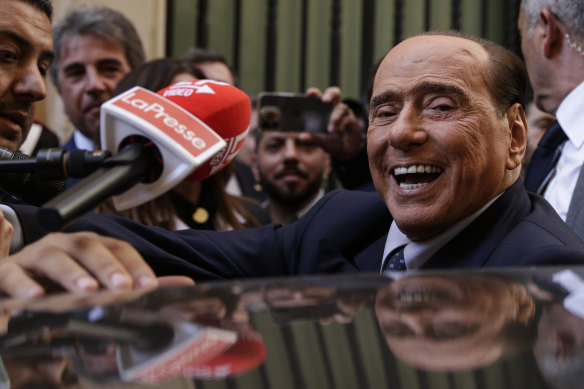 Silvio Berlusconi is mobbed by press as he leaves a reunion to decide the group leaders of at the Lower Chamber, in Rome.Credit:AP

“I have got back in touch a bit with Putin, quite a lot, in the sense that for my birthday he sent me 20 bottles of vodka and a very sweet letter,” Berlusconi told his lower house lawmakers according to the audio issued by news agency LaPresse.

“I answered him with some bottles of Lambrusco (wine) and an equally sweet letter,” said Berlusconi, whose birthday was on September 29.

He added that he was extremely worried about the situation in Ukraine but could not give his true opinion because “if it gets in the press there’ll be a disaster”.

The comments come as Berlusconi negotiates cabinet posts in a new government following Italy’s September 25 election which brought victory to the rightist alliance led by Giorgia Meloni, who is expected to be named prime minister next week.

A party spokesperson denied Berlusconi was back in touch with Putin, saying he had been telling his parliamentarians “an old story referring to an episode many years ago”.

Forza Italia later issued a statement saying the position of Berlusconi and the party on the war was “in line with the position of Europe and the United States,” and there was “no room for ambiguity and there never has been”.

Relations between Italy’s rightist coalition and Russia are being closely watched. Matteo Salvini, leader of the anti-immigrant League, has often praised Putin and used to don a T-shirt emblazoned with the Russian leader’s face.

On Tuesday the newly-elected lower house speaker Lorenzo Fontana, a League politician, warned in an interview on state television about the consequences of sanctions against Russia.

“They could become a boomerang and we will find ourselves in great difficulty,” he told the talk show Porta a Porta.