Cardinal George Pell says the strip searches were the worst part of his time in jail, while he sensed “a whiff of evil” at work during his trials.

In an in-depth interview with the BBC’s Heart and Soul program, Cardinal Pell said jail was a massive change from being the third most powerful figure in the Catholic Church. 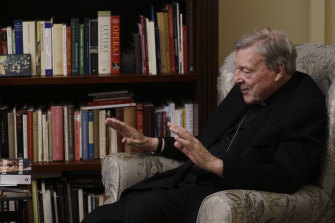 Cardinal George Pell answers a question during an interview with the Associated Press inside his residence near the Vatican in Rome in November.Credit:AP

“Jail is undignified, you are at the bottom of the pit. You are humiliated, but, by and large, I was treated decently so that was a big help,” Cardinal Pell said.

“The worst single thing was the strip searches, they are brief, humiliating and the ignominy of it is probably the worst of it.

“I had a firm base for a bed, a hot shower, which is very important to Australians, and the food, there was too much of it.”

Cardinal Pell was freed from jail last year after the High Court quashed his conviction for child-sex abuse, and he returned to the Vatican last October where he remains today.

He said he never felt despair during his time behind bars.

“I think the good lord realised that spiritually I’m pretty ordinary, so I wasn’t tempted to despair, I wasn’t on the edge of an abyss and I always realised that God was active but I didn’t know what he was up to,” Cardinal Pell said.

When asked if he wondered why this was happening to him, Cardinal Pell said he didn’t.

“In the Christian story Jesus never got a good run either, that is fundamental to our approach, the idea that suffering can be redemptive,” Cardinal Pell said.

“I’ve said to many people that Jesus suffered too. I’m not a prosperity Christian. So I never believed that because I was trying to do the right thing, that everything would have to be easy for me. That is not the Christian story.

“It wasn’t as though I ran around for days saying ‘why me, why me?’ I hoped I could be like Job from the Old Testament. Job’s problems were resolved in this life, he didn’t have to wait for Heaven for everything to be evened up as a lot of people do.”

“One of my lessons from my time in jail is that the Christian package works. If you believe there is a God, that all things will be well, that ultimately in the afterlife there will be peace and harmony and justice.

“If you really believe that, no matter what terrible things might happen to you here, it’s not a Greek tragedy, as for the [ancient] Greeks there is no afterlife, no possibility of fixing it up, the outcome was brutal and final. That is not a Christian perspective.”

Cardinal Pell repeated previous comments from his trials about having a sense of good and evil playing out.

“That point was made by one or two of my friends who are not deeply into that style of thing,” Cardinal Pell said.

“You feel as though there is a whiff of evil. Sometimes there is.”

Cardinal Pell also said he had thought about the two men who accused him while laying in bed in jail.

“Of course I did. One of them died years ago. But I’m a pretty good sleeper,” Cardinal Pell said.

“Perhaps, strangely, I’ve never been strongly antipathetic to the fellow who accused me. I didn’t know him. Nothing like what he said occurred.”

He said he had “forgiven” his accusers but would have more trouble forgiving others.

“You can decide to forgive and, perhaps later, there can be another surge of resentment.

“The important thing with forgiveness, no matter how you feel, you decide to forgive and then generally the good feelings follow.

“I certainly hope he finds peace as I think over the years he has had anything but that. Yes, of course, I would meet with him, but I found it a bit harder to forgive those who may have been involved in shaping his recollections.”