Japanese Emperor Akihito addressed his people at an abdication ceremony on Tuesday in the Imperial Palace’s Matsu no ma, or Hall of Pine. His reign will end at midnight on Tuesday, and the 85-year-old thanked his residents for their support during his 30-year reign. There will be an ascension ceremony on Wednesday for the next emperor.

Why has Emperor Akihito abdicated?

In his address to his people, Emperor Akihito said: “Today, I am finishing my duty as emperor. Let me express my deep appreciation for the remarks Prime Minister Abe has just given as the representative of the Japanese people.

“It is fortunate that I have been able to perform my duty as emperor with profound trust in and respect for the Japanese people for 30 years since my ascension to the throne.

“To the people who accepted and supported me as a symbol, I express my heartfelt thanks. 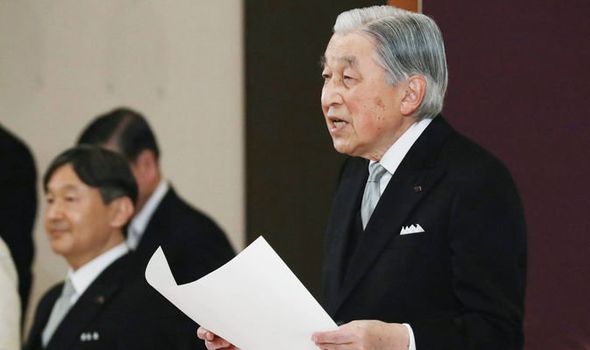 “Together with the empress, I hope from my heart that the new Reiwa (imperial) era that begins tomorrow will be peaceful and fruitful, and pray for the peace and happiness of our country and the people of the world.”

Emperor Akihito is the first Japanese monarch to abdicate in two centuries, has sought during his time on the throne to ease the painful memories of World War 2.

He has also tried to reach out to ordinary people, including those marginalised in society.

The emperor had expressed concerns about his age and declining health in August 2016, making his wish to abdicate whilst well and capable known.

Who is next in line?

Emperor Akihito has two sons, Naruhito and Fumihito. Of these, Naruhito is the elder and will take on the role of Emperor.

Akihito will announce his abdication in a palace ritual on Tuesday evening, and at midnight his era of Heisei, or “achieving peace” will end and Naruhito will take over with his Reiwa era of “beautiful harmony” beginning.

On Wednesday morning, Naruhito, will undertake his first ritual as emperor by receiving the imperial regalia, including the sword and the jewel, as proof of his ascension to the throne.

We will use your email address only for sending you newsletters. Please see our Privacy Notice for details of your data protection rights. Overall around…