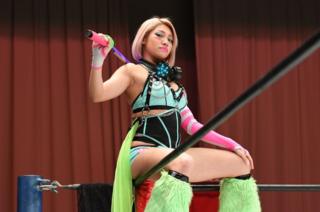 Hana Kimura, a professional Japanese wrestler who appeared in the latest series of Netflix’s reality show Terrace House, has died at the age of 22.

Stardom Wrestling, Kimura’s organisation, confirmed the news and asked fans to be respectful.

The cause of death was not immediately clear.

Shortly before she died, she issued a series of troubling social media posts implying she had been cyber-bullied.

The most recent update on her Instagram story on Friday featured a photo of her with her cat, with a caption that read “goodbye”.

A winner of Stardom’s 2019 Fighting Spirit Award, Kimura was one of the cast members of Japanese reality TV show Terrace House, before it was suspended due to coronavirus. The show follows three men and three women as they temporarily live together in a house.

Her mother was also a well-known wrestler, Kyoko Kimura.

Confirming her death on Twitter on Saturday, Stardom said: “Please be respectful and allow some time for things to process, and keep your thoughts and prayers with her family and friends.”

We are very sorry to report that our Hana Kimura has passed away.

Please be respectful and allow some time for things to process, and keep your thoughts and prayers with her family and friends.

We appreciate your support during this difficult time.

Concerns were raised on Friday after Kimura reportedly posted images of self-harm on Twitter along with messages that read: “I don’t want to be a human anymore. It was a life I wanted to be loved. Thank you everyone, I love you. Bye.”

Kimura is said to have been the target of hundreds of mean tweets from fans and critics on a daily basis. On news of her death, fans and industry figures spoke out against cyber-bullying and its impact on mental health.

“It absolutely breaks my heart how cruel people can be on social media,” said Impact World Champion Tessa Blanchard.

“I hope this serves as a reminder that interactions on social media can have a serious effect on the mental health of anyone, no matter who they are,” wrote wrestling journalist Adam Pacitti.

The death of Hana Kimura is an absolute tragedy. I hope this serves as a reminder that interactions on social media can have a serious effect on the mental health of anyone, no matter who they are. Be kind. RIP.

Among those also paying tributes to the star online was British professional wrestler Jamie Hayter, who wrote: “Distraught. I don’t even know what to say or feel. Numb. I can’t express it. RIP Hana Kimura. Such a wonderful human being.”

US wrestler Su Yung said: “I will always love and miss you, my friend. You are my little sister.”

I will always love and miss you, my friend. You are my little sister. The Swanns send our love and condolences to Hana Kimura, her family, and loved ones. I will never forget you. So much I want to say… my heart is broken. pic.twitter.com/PB5pO20YIj

If you have been affected by the issues raised in this article, help and support can be found at this BBC Action Line.