Jay Leno's a force to be reckoned with, because just two days after he was discharged from the Grossman Burn Center following a 10-day stay, the former host of The Tonight Show says he'll get back to doing standup as soon as this weekend.

The 72-year-old comedian revealed the news to a throng of paparazzi who first saw him in good spirits while filling up his classic car at a gas station. He told the paps he's doing "good" and thanked them for all the compliments. He also found time to joke around with them, asking one if he knew where to find the gas cap on the classic ride. Spoiler alert, it's hidden behind the driver's side taillight.

Leno also was asked if he'll ever drive the vintage car he was working on when a gas leak triggered an explosion, lighting him on fire and sending him to the hospital with second- and third-degree burns on his face and hands. The comedian said he'll probably drive that very car sometime next week, while adding that "the car didn't do anything wrong."

Later, Leno arrived at his Burbank garage where he's known for storing his car collection. It was while waiting for the gate to open when Leno revealed that not only is everything OK, but he'll be performing at 7 p.m. on Sunday at the famed Comedy Magic Club in Hermosa Beach, California. That's the same club where Leno has performed just about every Sunday since he took over as host of The Tonight Show in 1992, and where he'd try out his monologue material while reading index cards. 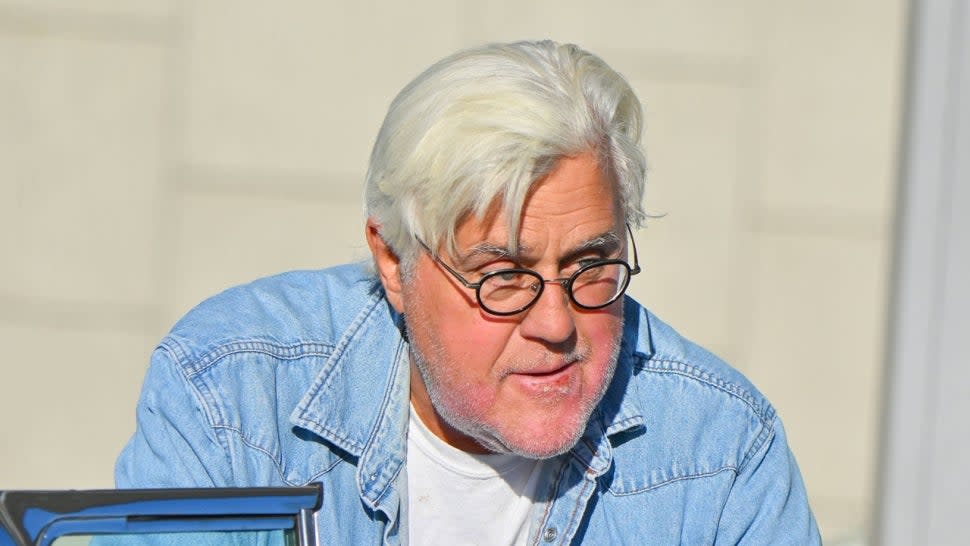 As the gates finally opened, one photographer was heard telling Jay to go home and get some rest. Leno threw in one more joke that some might refer as "too soon" when he said, "Yeah, I need some BBQ."

On Monday, Leno was seen for the first time as he said goodbye to the team that looked after him at the Grossman Burn Center in Los Angeles. He was at the facility for 10 days and he's expected to make a full recovery.

Dr. Peter Grossman, a renowned expert in the comprehensive treatment of burn injuries and director of the prestigious burn center, spoke to ET about Leno's status and recovery, explaining that he sustained "significant injuries" but is still "doing very well."

"He's got a very strong attitude. He's a very strong individual," Grossman shared. "And he's a person who really is looking to move forward, to try to find a way to get past this episode of his life and to get back to what he normally likes to do, which is to be out there and entertain and be with the people. I think at some point soon he'll get there, but I've had to tell him that, for the time being, he needs to sit back and take care of Jay."

Jay Leno's Surgeon On if Comedian Will Suffer Permanent Damage