Collingwood star Jordan De Goey has been fined $2075 after pleading guilty to road offences, including speeding while driving a sports car when he was a P-plater and sending text messages when stationary at traffic lights.

But De Goey, 25, will be spared a further appearance before court after a magistrate sentenced the Magpies midfielder without him needing to face a final hearing. His fines for the three road incidents were imposed on August 18, nine days after he had an unrelated charge of indecent assault withdrawn by police prosecutors. 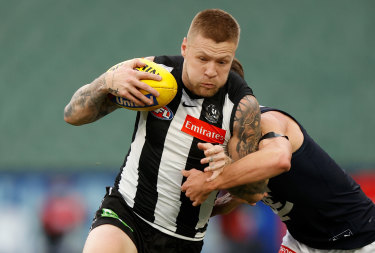 Jordan De Goey in action for Collingwood this year.Credit:Getty Images

Police pulled him over and found that as a probationary driver he wasn’t permitted to be driving the sports car, and that he didn’t have P-plates displayed. 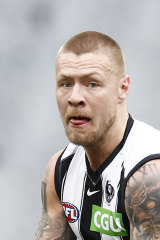 The footballer also admitted to texting on his mobile phone while stationary at traffic lights in his blue Lexus in Punt Road, South Yarra on July 6, 2019. His licence was suspended at the time because of accrued demerit points.

De Goey conceded to police he had “no reason” for texting while on the road, and said he had “no idea” his licence was suspended at the time. His Lexus was later impounded for 30 days.

In the other road offence, De Goey was pulled over for failing to display P-plates on a Harley-Davidson motorcycle he was riding in Olympic Boulevard, Melbourne on February 13 last year. He was initially charged with failing to wear a compliant helmet, but that charge was later withdrawn.

Magistrate Timothy Bourke on August 18 fined De Goey $2075, without conviction, after he pleaded guilty to seven charges including speeding and driving while suspended.

Mr Bourke opted not to suspend De Goey from driving, but warned future breaches would run the risk of having his licence suspended or cancelled.

The magistrate finalised the case through written remarks without the details being aired in open court. Magistrates can finalise some cases where minor offending is involved after the measure was introduced during the COVID-19 pandemic, which has created a backlog of criminal cases before the courts.

On August 9, De Goey had a charge of indecent assault withdrawn by prosecutors. That charge related to an alleged offence against a woman on June 21, 2015, when the footballer was 19. Police were ordered to pay his legal costs.

In 2018 De Goey was caught drink-driving while on his P-plates and fined $10,000 and suspended by Collingwood. That incident came a year after he was suspended by his club for lying about how he suffered a broken hand in a bar fight in St Kilda.

De Goey has played 118 AFL games and had a good on-field season in 2021, although the Magpies finished second-last and won only six matches.