The dramatic dawn rescue of a kangaroo from a chilly Canberra lake has taken a tragic turn, with authorities confirming the young marsupial had to be destroyed by an ACT government veterinarian.

Footage of a tired kangaroo being pulled from the cold waters of Lake Burley Griffin last month made international headlines, with two passers-by jumping in to assist. 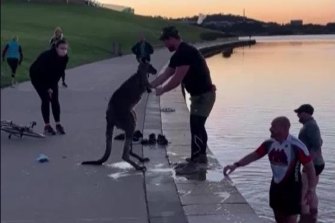 A kangaroo that was pulled from Lake Burley Griffin was later put down by ACT government veterinarians.Credit:David Boyd

The video, shared on social media, showed a cyclist and a jogger carefully entering the water and approaching the kangaroo slowly. The pair were able to carefully pick the roo up and take it back to dry land, where it leaned against them and bystanders congratulated the rescuers.

The rescue was caught on camera by passer-by David Boyd, who told nine.com.au at the time he came across the “little fella” sitting in the water “shivering, and obviously in a bit of distress”.

“These two legends jumped in and helped out,” he said.

An ACT government spokesman said a department veterinarian had examined the kangaroo and found the animal to be in poor physical condition.

“Given significant concerns for the kangaroo’s welfare, the animal was euthanised,” he said.

“Several factors contributed to the welfare concerns for this kangaroo, including the poor symptoms the animal was showing, the location where the animal was found, and the cold, windy weather.”

The rescue footage was shared hundreds and thousands of times on social media platforms such as Twitter and Facebook, with one user in the United States writing: “Humanity. It still exists. Even with a funny accent”.

The ACT Parks and Conservation Service warned community members that they should not attempt to rescue injured or distressed animals and instead call local wildlife officers to “let the professionals respond”.

“Capture myopathy, or muscle damage resulting from extreme exertion or stress, is always a primary consideration in any rescue of a kangaroo,” the spokesman said.

“Please give the animal space and keep an eye on them from a distance – maintain enough room for the animal to leave the area.

“Kangaroos, and other local wildlife, can become easily agitated and stressed in unfamiliar situations.”

The nation’s capital is estimated to be home to about 30,000 eastern grey kangaroos and since 2009 the government has conducted culls of about 2000 during the winter months to alleviate the impact of overpopulation on biodiversity.

Some mountain ranges and national parks surrounding the capital are estimated to be home to about 450-520 kangaroos per square kilometre.

One of the largest mobs is within the grounds of Government House at Yarralumla, which have been monitored on and off by students from the Australian National University during the past decades.

Former governer-general Sir William Deane was once forced to pay tens of thousands of dollars to sterilise the male roos living within the 53-hectare property to prevent a population explosion destroying the lawns.

It led to wild male kangaroos from a rival mob swimming across the lake to win the favours of females living in captivity on the Dunrossil Drive estate.