Twitter SUSPENDS Kanye: Rapper’s account is locked after he posted series of vile anti-Semitic slurs and declared war on Jewish people – as Jewish community and stars line up to condemn him and he remains suspended from Instagram

Kanye West has been locked out of his Twitter account after making a slew of anti-Semitic comments – as Jewish celebrities and politicians condemned him for the vile online abuse.

The rapper, 45, declared war on the Jewish community following his controversial Paris Fashion Week show, where he showcased his White Lives Matter shirts.

In a post, that has since been removed by Twitter, Kanye wrote: ‘I’m a bit sleepy tonight but when I wake up I’m going death con 3 On JEWISH PEOPLE.’

He added: ‘The funny thing is I actually can’t be Anti Semitic because black people are actually Jew also.

‘You guys have toyed with me and tried to black ball anyone whoever opposes your agenda.’

A Twitter spokesman said: ‘The account in question has been locked due to a violation of Twitter’s policies.’ This means that the rapper will be unable to post.

Deafcon – also known as defense readiness condition – is an alert used by the US Armed Forces to indicate how quickly the military can be deployed during deadly emergencies and attacks. 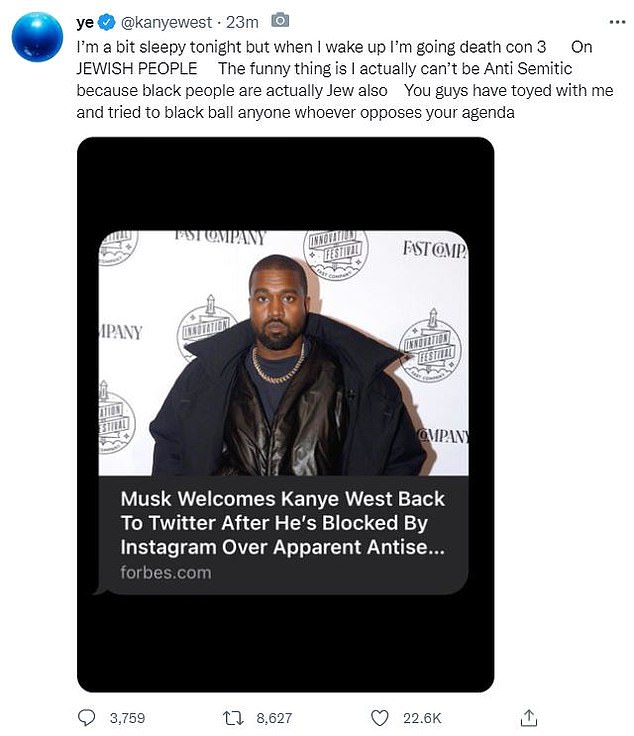 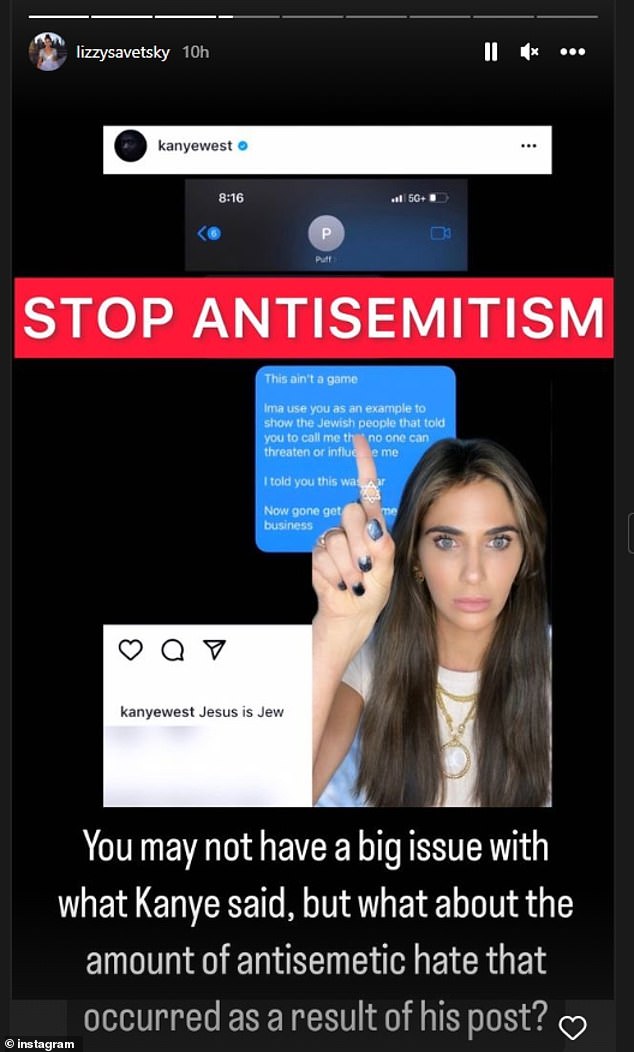 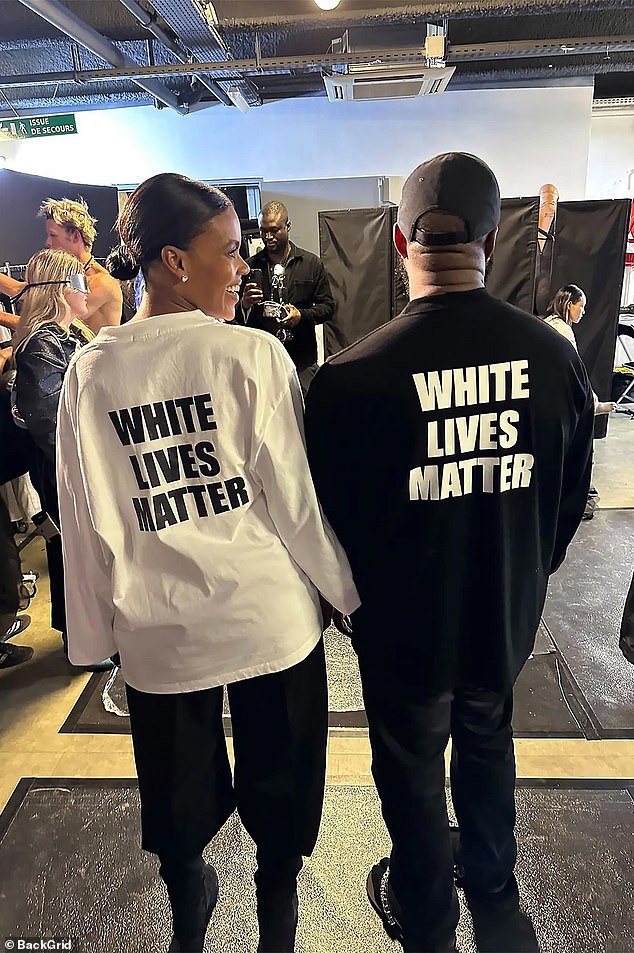 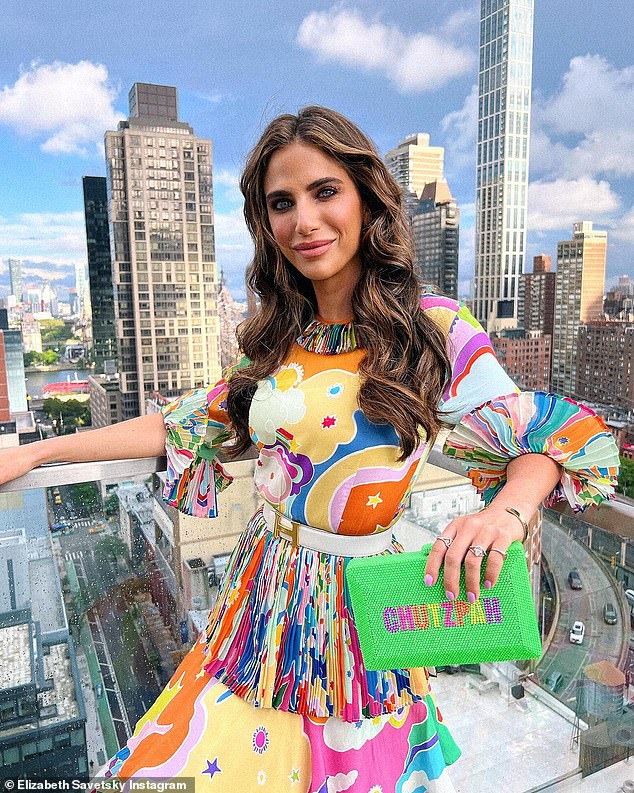 Lizzy Savetsky, who is among the new cast members for the Real Housewives of New York, slammed Kanye for his repeated antisemitism on social media

West previously accused rapper Diddy of being controlled by Jewish people trying to silence his ‘White Lives Matter’ message – resulting in his Instagram account being restricted.

And Diddy responded in a post saying he hopes we stop all this ‘coonin’ and baffoonin’.’

In the veiled swipe at Kanye, he wrote: ‘We don’t have the time! We are under a state of emergency!!! Unapologetically black first!’

This comes as reality star Real Housewives of New York star Lizzy Savetsky received a barrage of anti-Jewish abuse herself for calling out Kanye’s vile antisemitism.

In a clip, Savetsky said that Instagram had become a ‘breeding ground for antisemitism’ as she berated the app – and Kanye – for his hateful comments.

Among the nasty backlash, the reality star was told to ‘get your hidey hole in the attic ready for you and the family’ – a disgraceful reference to Anne Frank, who was killed by the Nazis in 1945.

Others commented on her physical appearance, peddled anti-Semitic tropes that Jewish people control the media and banks, and one also told her that ‘Germany shoulda won’ World War Two.

She took to social media and said: ‘Thankfully Instagram has restricted Kanye’s account. That doesn’t change the fact that I continue to receive shockingly hateful, evening threatening comments in support of his anti-Semitic message.

The mother-of-three from Texas added: ‘My children’s great grandmother didn’t survive Auschwitz so we could sit idly by as people threaten our existence as a people. We have to speak up! I take these threats very seriously and you should to.’

Following her rant, Savetsky, who was announced as a new cast member in August, reposted recent Kanye’s tweet and simply wrote: ‘In case you didn’t see Kanye’s since removed tweet.’ 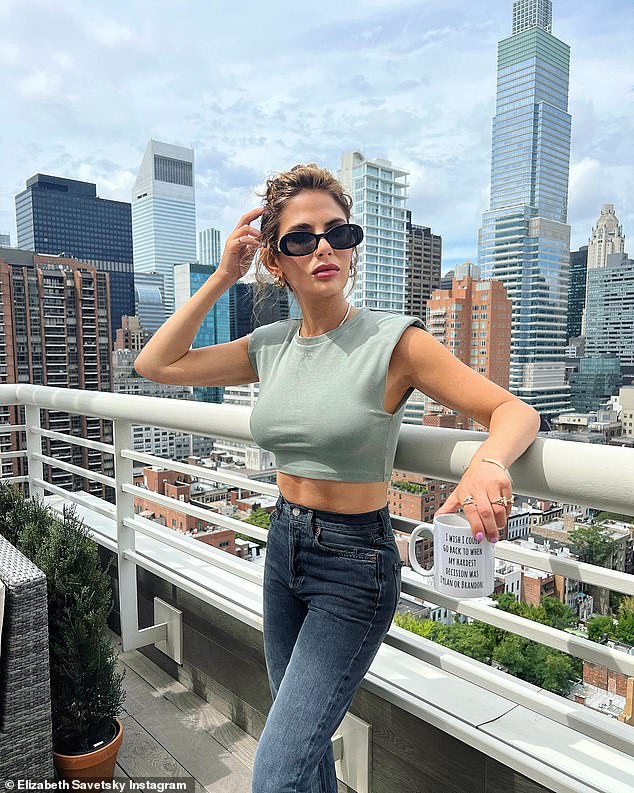 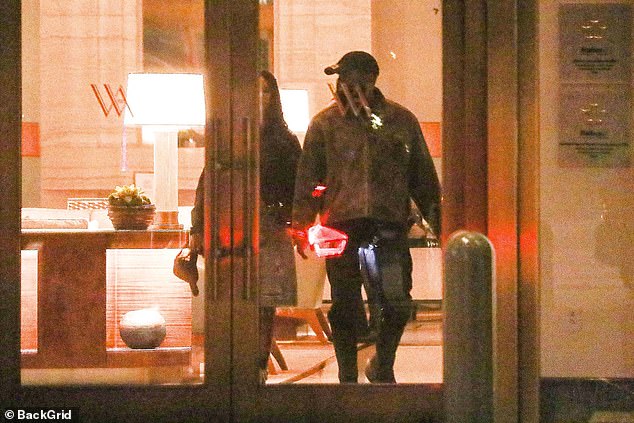 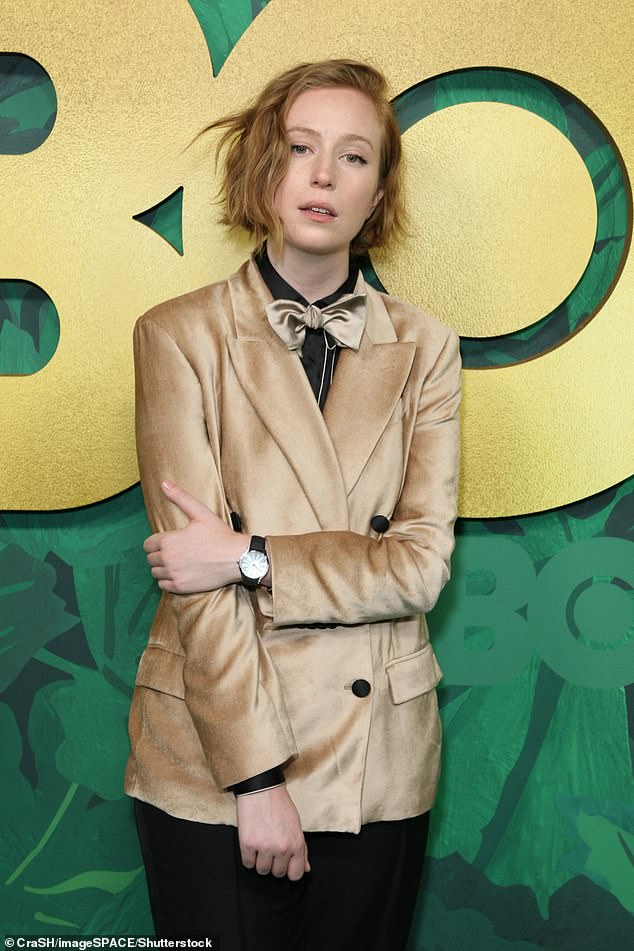 Comedian Hannah Einbinder also rallied her 124,000 social media followers to stand up against the hate that Kanye spewed online 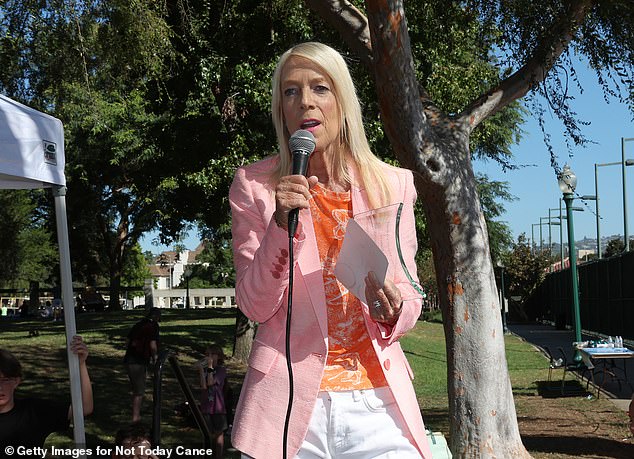 Mayor of Beverly Hills Lili Bosse spoke out against the rapper’s antisemitism, saying that he ‘clearly spews hatred to Jews’ 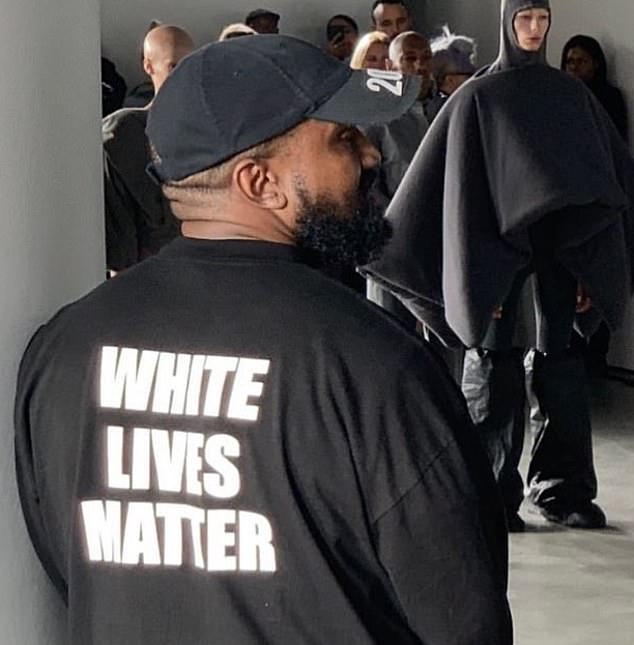 Comedian Hannah Einbinder told her 124,000 followers on Instagram after Kanye’s tweets: ‘Just a reminder that if you f*** with this man then you are dead to me.

‘Gonna need my non Jewish friends to condemn that s***. It can’t just be Jews defending ourselves, there aren’t enough of us left. We need allies.’

Ritchie Torres, who is a US representative for New York’s 15th congressional district, was also among politicians and celebrities calling out the rapper for his antisemitism.

He wrote on Twitter: ‘Kanye West: if you see yourself at war with Jewish people, then you are, by definition, Antisemitic. Shame on you and your enablers.’

British comedian and author David Baddiel added: ‘Kanye West’s threat to Jews is as ever based on a myth of Jewish power, a myth believed across the political spectrum.’ 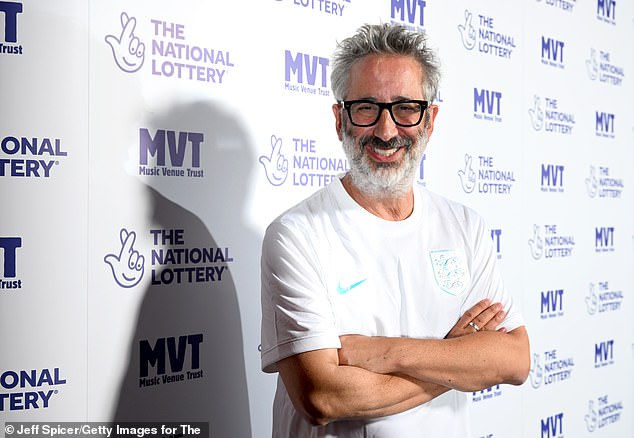 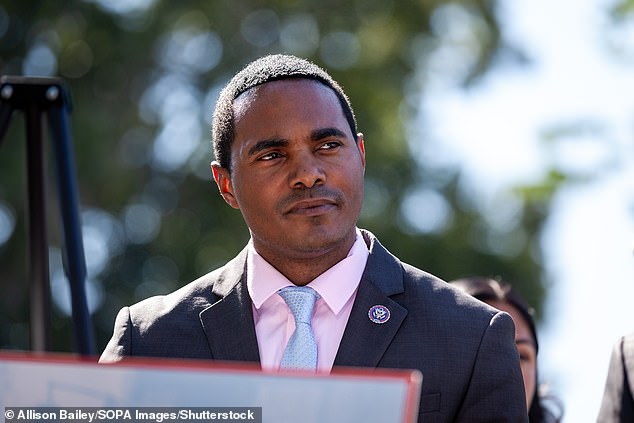 Representative Ritchie Torres told Kanye West following the vile abuse: ‘Shame on you and your enablers’

The writer, who penned the book Jews Don’t Count, said: ‘It lies at the heart of the Jews Don’t Count phenomenon: Jews are powerful so attacking them is punching up and concern for them in the face of it unnecessary.’

Veteran New York State Representative Dov Hikind also called out the rapper for his spew of hatred, calling him a ‘sick man.’

Hikind said: ‘Kanye is a Jew-hater in denial. He’s clearly a sick man

‘Twitter removed Kanye’s nasty and dangerous antisemitic tweet, but we will not forget the line this man has crossed.

‘We can only watch with the same sadness shared by his own family as Kanye West self destructs and attacks his former friends. Ye who sows hate shall reap sorrow.’

The Mayor of Beverly Hills in California also slammed Kanye for his comments – saying he ‘clearly spews hatred to Jews.’

Lili Bosse wrote: ‘As a daughter of an Auschwitz survivor who is no longer on this earth, I am left to bear witness to antisemitism. 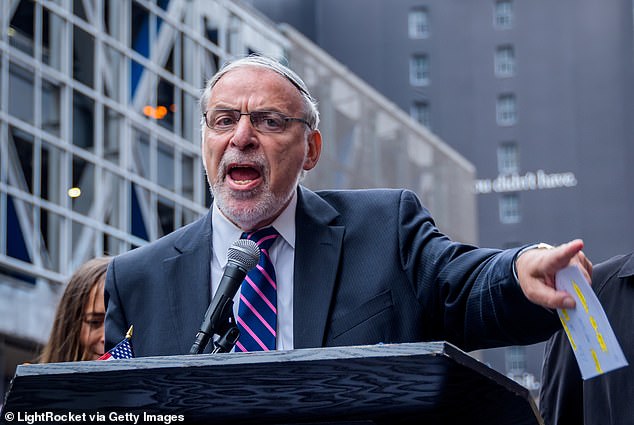 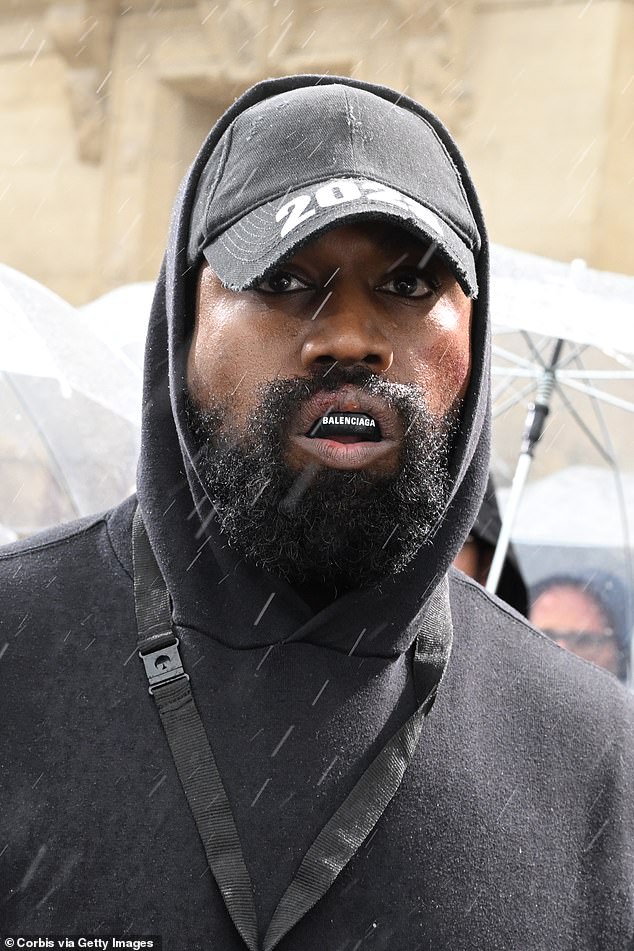 West has found himself in multiple scandals in recent days, after he wore a White Lives Matter shirt at his Paris fashion week show 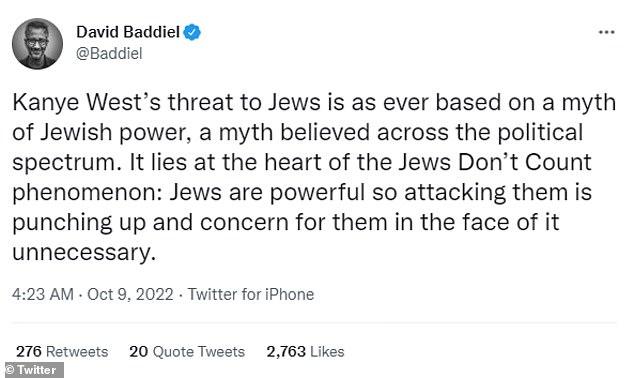 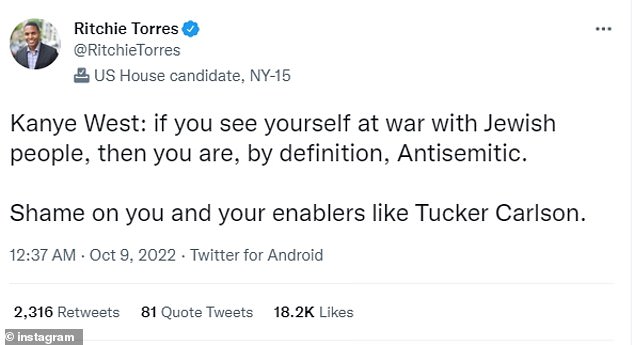 ‘As I see twitter blowing up tonight over a tweet by someone who clearly spews hatred to Jews, I will be the voice for the voiceless. Never Again. Never Forget.’

Just hours after the Meta restriction, Kanye took to Twitter to continue the attacks.

West’s tweets marked the first time in nearly two years since he has posted to Twitter. Elon Musk welcomed his return to the platform, tweeting ‘Welcome back to Twitter, my friend!’

He posted the tweet alongside a photo of the pair performing karaoke at an unknown time.

A Meta spokesperson said: ‘We may place restrictions on accounts that repeatedly break our rules.’