Residents wary and anxious as lockdown in the Muslim-majority region for a second straight day hits normal life. 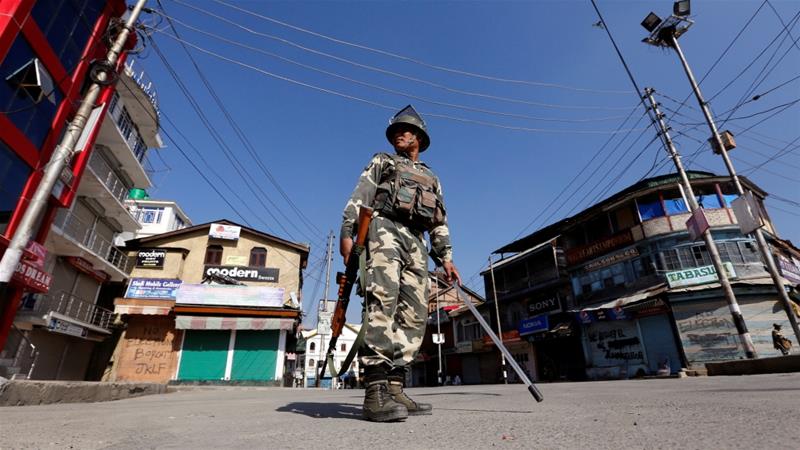 His daughter, along with some of her friends, was forced to leave Baba Ghulam Shah Badshah University near the main city of Jammu, some 320 kilometres away, on Monday after the region was locked down by Indian authorities.

The communications blackout entered its second day on Tuesday, with cable, telephone and internet links snapped to deter protests over the most far-reaching political move by India in the disputed region in nearly seven decades.

Mushtaq said it had been more than 24 hours since his daughter and her friends left Jammu and they had not reached home yet.

“We talked to police and civil administration, but they aren’t helping in locating the girls. We don’t know whether they are still in Jammu and or have reached the southern part of Kashmir,” he told Al Jazeera.

“We are helpless. We hope no untoward incident has happened with the girls.”

Mushtaq is among seven million residents in the Muslim-majority Kashmir valley, who have been put under an indefinite lockdown following the Indian government’s decision to revoke the special status of Jammu and Kashmir state.

‘In no mood to celebrate Eid’

The Muslim festival of Eid-al-Adha falls on Monday in Kashmir, but residents said they are in no mood to celebrate. They said they were not allowed to purchase the sacrificial animals from the markets.

Sellers said the lockdown hit their business hard. Zahoor Ahmad Sheikh, 29, said he had ordered nearly 60 sacrificial animals to sell for Eid, but there were no buyers.

“I had hoped for a bumper sale this season, but this vicious plan by the Indian government has not only dashed my hopes of being safe in my own state, but has also resulted in losses to my business,” he told Al Jazeera.

“People used to buy these animals for Eid, but now nobody wants to spend money as the situation is tense and nobody knows what will happen in the future.”

With uncertainty and confusion plaguing the region, the residents were seen hoarding essential supplies from nearby stores located off the main roads.

Patients and infants were the worst hit, with pharmacies closed and formula milk for babies unavailable.

“Rice, flour and other eatables are about to finish. It will remain for two more days. With no supplies coming from outside the valley, Kashmir is going to witness tough days,” said Mohammad Rafiq Dar, 27.

The lockdown has also hit the region’s apple growers, who harvest their produce during this time of the year.

The apple industry is one of the main contributors to the state’s economy. Fruit growers said trucks laden with their produce were stuck, since the security forces were not allowing any movement of the vehicles on the highway.

“Apples have a low shelf life,” said Fayaz Ahmad Malik, 47, president of a fruit growers’ association in Sopore, one of the largest fruit markets in the country. “This is worrying.”

Meanwhile, there is anger and helplessness among residents as security forces patrol the streets and authorities have banned any gathering of more than four people.

Patients with chronic diseases were allowed to move to hospitals in the main city of Srinagar, but only after showing a special pass issued by the authorities.

“When former chief ministers, who are the representatives of the Indian government in Kashmir, are put in jails, how can a common Kashmiri feel safe now? By scrapping Articles 370 and 35A, India is now an occupying force.”

Resident Suhail Rashid said India’s move would affect the peace in the region.

“India claims to have established peace in Kashmir, but it will trigger a new wave of rebellion, which would probably engulf the region into uncertainty.”

The fate of Kashmiris has been decided hundreds of kilometres away in capital New Delhi by the country’s Hindu nationalist government – a process in which they effectively have no say.

That has turned Kashmir into a “panchayat” (village council), Javed Hassan Beigh, a former legislator from Baramulla, said.

“Democratic values for which India was known throughout the world are nowhere now,” he said.