When Susie Oryzak and her husband Dion returned to Melbourne in 2017 after a three-year stint in San Francisco, they brought back a habit that makes them a rarity in their hometown.

Despite having two children while abroad, they resolved to continue living without a car. 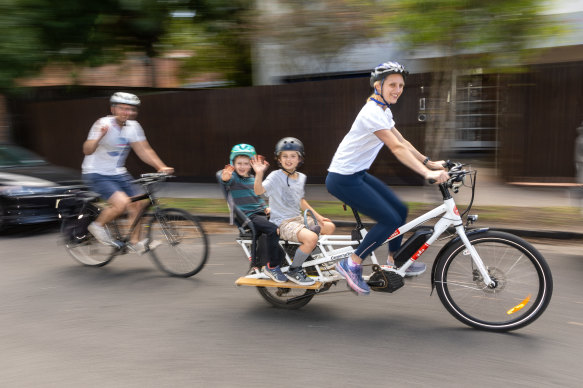 Susan Oryzak and her family are one of the small numbers in Melbourne who voluntarily do not own a car. Credit:Jason South

“When we tell people we don’t have a car, they are really surprised and very curious about how we make it work,” Oryzak said.

“They often respond with ‘oh gosh I could never do that, I really need my car’, which I think just highlights that reliance people think they have on their car.”

In San Francisco – with its expensive parking, walkable streets and good public transport – about 30 per cent of households do not own a car. That number is only 8 per cent in Melbourne.

And among families like the Oryzaks, it’s even rarer. Of the 621,573 households across the city with two adults and one or more children counted in the 2021 Census, just 1 per cent of them – 6414 families – did not own a motor vehicle.

Transport is responsible for a quarter of Victoria’s carbon emissions. Oryzak said environmental concerns were behind their decision not to own a car, but she estimated they also saved about $6300 a year by not running one.

Graham Currie, a transport researcher at Monash University, said Melburnians traded off the choice of car ownership with the cost of housing. Being carless was an option only in more expensive inner-city suburbs, and the opposite was true as people moved further out.

“In the outer suburbs, you’ve got to have two cars if you’ve got two adults and that’s quite expensive,” he said. “It creates a lot of problems when interest rates rise or fuel prices rise.”

Census data shows single parents in Melbourne are five times more likely to not own a car than couples with children, with 5.5 per cent falling into that category.

Professor Jago Dodson, director of the Centre for Urban Research at RMIT University, said families who did not own cars by choice brought huge benefits to the city, helping to reducing road congestion, pollution and traffic deaths.

“We should be aiming to encourage that kind of behaviour,” he said.

But planning laws distorted the true cost of car ownership, with parking spaces still mandated for every apartment in new residential buildings, adding about $50,000 to the purchase prices.

“If more households could see the true cost of that car parking space in an apartment block, they might not choose to take up the option,” Dodson said.

Oryzak agrees that her family was privileged to be able to move to Balaclava, in the inner south-east, where walkable streets, bike lanes, and nearby tram and train lines made their car-free lifestyle possible.

Most mornings the couple dink Billy, 8, and Toby, 6, to the local primary school on an electric cargo bike. Susan, a psychologist, takes trams to her South Melbourne office while Dion works from their empty garage, which they converted into an office.

Shopping is done locally or delivered, they ride or take public transport to social events, and when none of that is possible, they catch an Uber. A couple of times a month they borrow a neighbour’s car through the Uber Carshare service.

Oryzak said many families would probably find it easier to make the switch than they expected.

“Sometimes it does get a bit unpleasant if it’s wild weather and we need to pick up the kids. But we model our attitude towards that: it’s an adventure, we put our raincoats on and get home and get nice and dry,” she said.

“Not having to deal with parking or being stuck in traffic, that’s a really big bonus. Often we’re streaming down the bike lane, passing all these cars that are stuck in traffic.”

Census data shows that encouraging people to own fewer cars isn’t as radical as some might suspect. Thirty years ago, there were 38 passenger vehicles in Victoria for every 100 people who lived here. By last year, that number had risen to 61.