BLADE nut Steven Robertson murdered his estranged wife and step-daughter before dying in a car smash in just 45 chaotic minutes, it emerged tonight.

The fiend, 40, repeatedly knifed Emma Robertson Coupland, 39, in the Crosshouse Hospital car park as the ward cleaner made her way to work at 7.45pm yesterday. 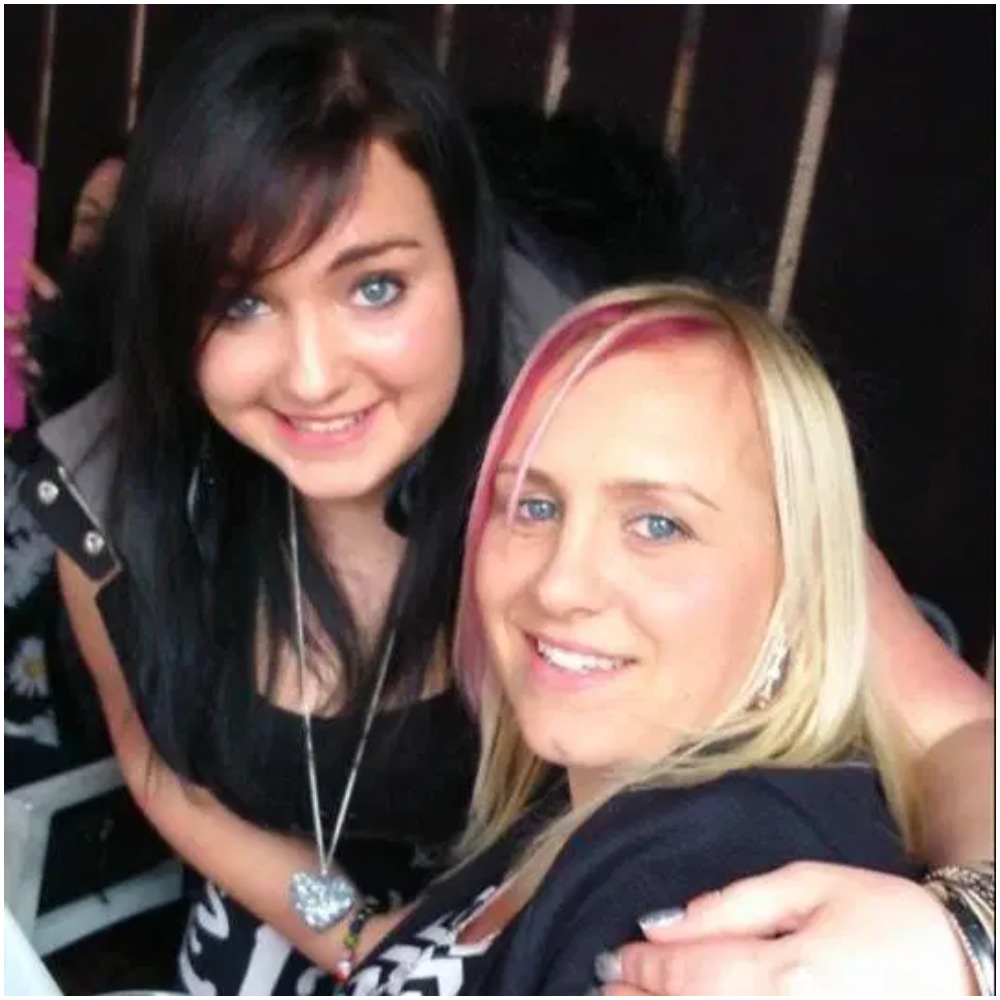 He left the mum of four bleeding to death before driving two miles to slaughter Nicole Anderson, 24, outside a takeaway in central Kilmarnock.

The deranged garage worker then headed 12 miles out of the Ayrshire town before crashing his motor into a tree on a minor road at around 8.30pm. Cops confirmed he died at the scene.

Loved ones last night paid emotional tributes to the slain pair. Nicole’s fiancée Vicky King, 29, below, said: “My beautiful wee angel, I will love you forever. Hoping I could wake up and this all be a dream. Can’t take it in, I’m completely broken.”

She later shared a string of poig­nant snaps online, adding: “So glad I have all these memories with you.

“You’ll never know how much you mean to me. I will love you till the end of time my darling.

“I will miss that beautiful smile, that wee gorgeous person inside and out. You made me the happiest person on this planet daily. Until we meet again baby I love you.” 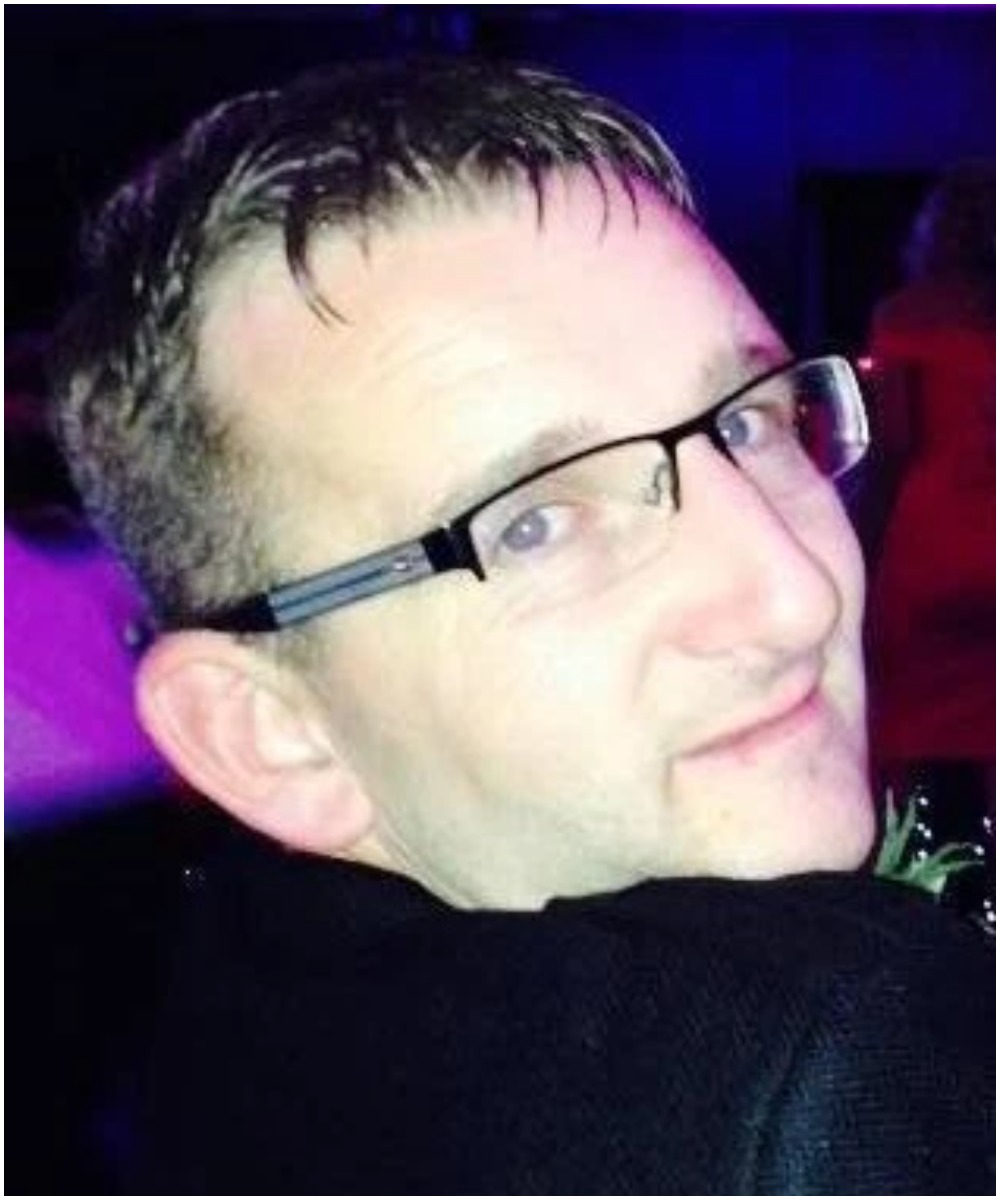 And in a heartfelt message to Emma, Vicky wrote: “Love you, always welcomed me into your home with open arms. Look after my darlin up there.”

Emergency crews battled in vain to save Emma following the 999 alert in the hospital’s grounds.

Horrific footage later emerged appearing to show paramedics tending to stricken Nicole in the town’s Portland Street, where she worked as a delivery driver for the Indian eaterie Spicy Cube.

She was rushed to the same hospital where her mum was attacked but passed away a short time later.

Officers were seen running through the streets and comforting a distressed woman in the aftermath of the town centre atrocity at around 8.05pm.
And Nicole’s motor was spotted inside a police cordon being insp­ected by forensic experts.

Robertson’s mangled white car was discovered opposite a farmhouse on the B7036 near Ochiltree. 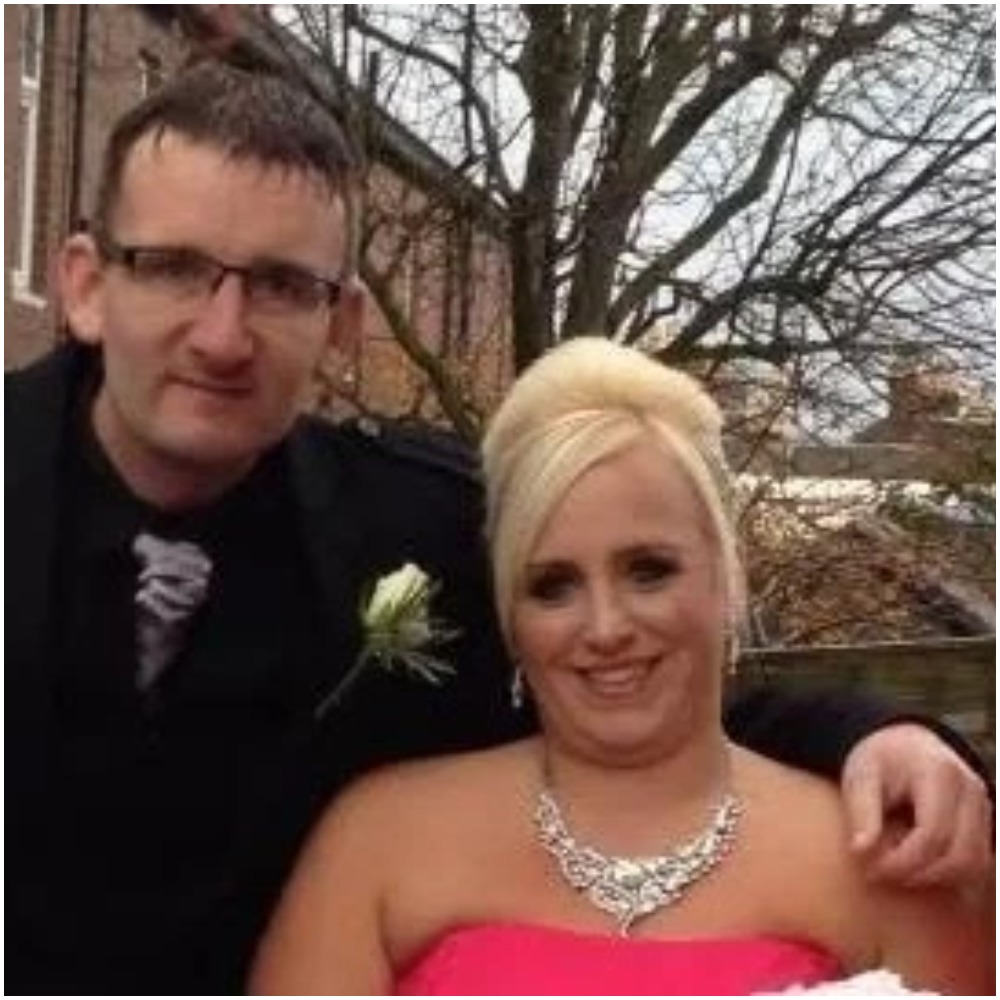 A police van was yesterday parked across the road around 100 yards away from the smash scene.

Ten officers in white forensic suits were seen approaching the motor, which had a green cover on it.

Reacting to the double murder, Emma’s sister wrote online: “I am totally broken, my God man this cni be happening we argued like f*** all the time but ur ma only sister ma first niece please tell me am dreaming no way man.”

One of the couple’s three daughters shared a snap of the family together with the caption: “Life will never be the same without use.”

And another relative said: “Honestly can’t even put into words how I’m feeling, absolutely devastated. She was the most loving caring person in this world, and never had a smile off her face.

“Your gonna be one missed girl Nicole. Best lassie to walk this planet without a doubt.” 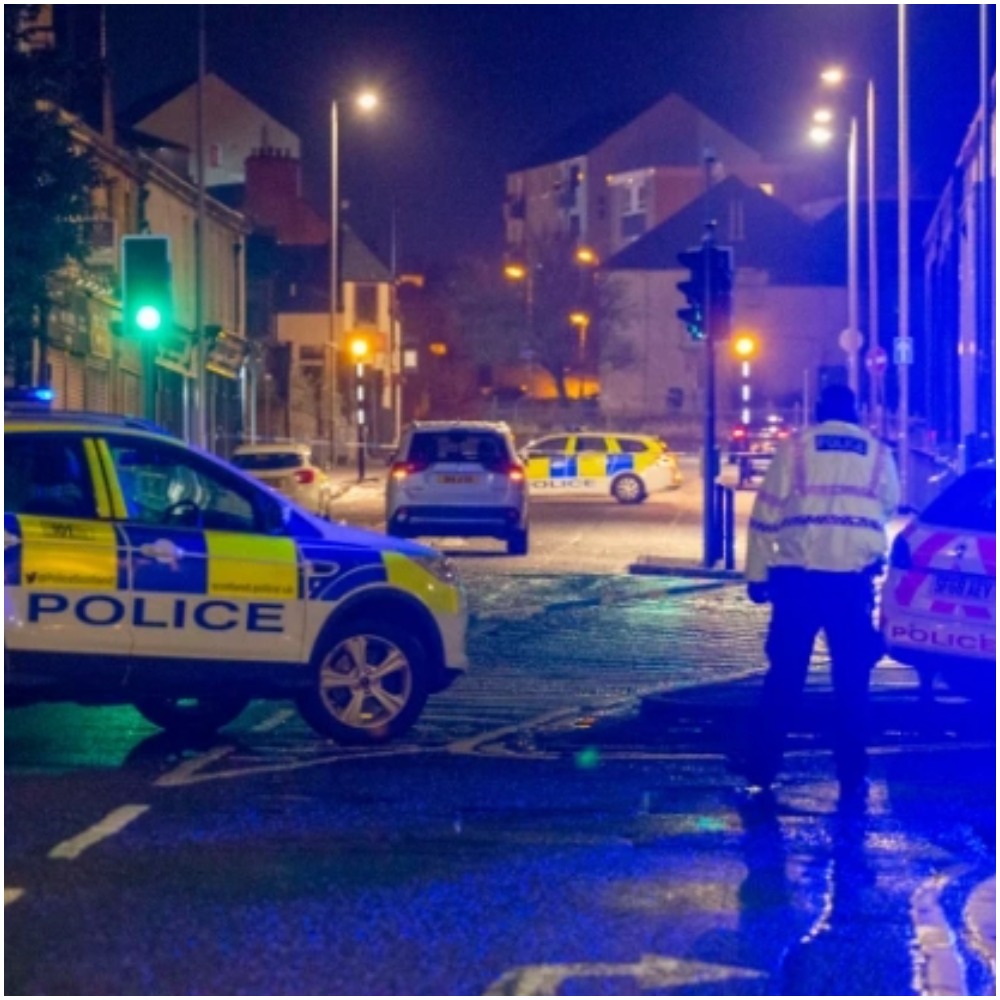 A number of floral tributes were left at the hospital today.

Another note said: “Thinking of our dear colleague and your precious daughter.

A third read: “Nicole. RIP angel. Thoughts with all the family.”

Neighbours in Kilmarnock told how they were struggling to cope with the family tragedy.

One said: “Emma was a lovely woman, she was very well known. 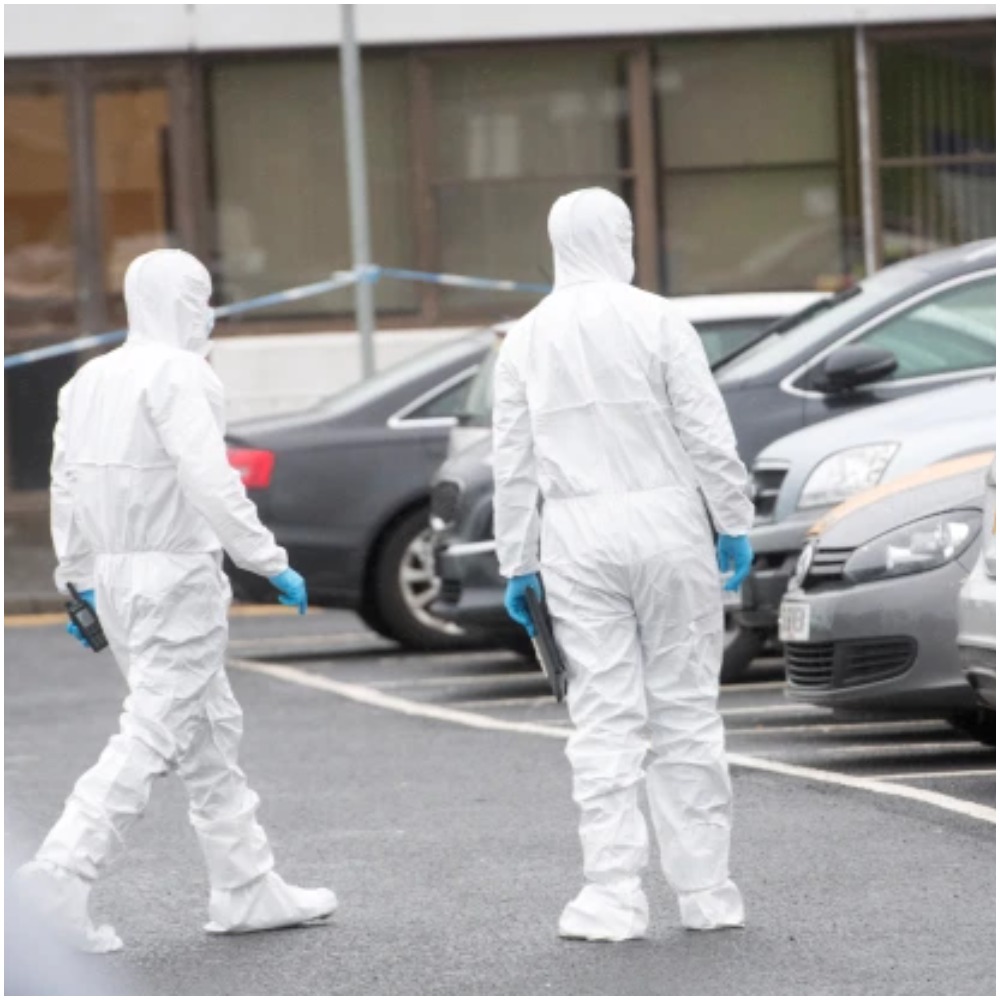 “Everyone was stunned and shocked when they heard what had happened. Three young girls have lost their parents and big sister — it’s devastating.

“To lose one person would be bad enough, but all three is horrendous. We all really feel for the girls.”

We told today how cops swooped to lock down the hospital and town centre. The force helicopter was also drafted in.

A large area around Portland Street remained cordoned off last night as teams scoured for clues.

The hospital’s A&E department and main entrance were open as normal yesterday morning.

But two police vans and mounted cops were on patrol, with part of the car park sealed off.

Force chiefs stressed they were not looking for anyone else in connection with Thursday’s horror.

Chief Superintendent Faroque Hussain said yesterday: “Understandably, people will be shocked by what has happened.

“We are still in the process of establishing the full circumstances.

“However, I would like to reassure people that there is no wider threat to the community.

“Officers will be on patrol and anyone with any concerns can approach these officers.”

Appealing for witnesses, he added: “A number of locations remain cordoned off as officers continue to conduct inquiries.

“We are working to confirm the full circumstances of what has happened. If anyone has any information which could assist our inquiries, please do contact us.”

Dr Crawford McGuffie, medical director of NHS Ayrshire and Arran, said police had confirmed the risk to patients, staff and visitors to the hospital was minimal.

He added: “There remains a large police presence on the grounds of the hospital.

“We would like to reassure anyone coming to the hospital, in particular to any patients or staff coming on shift, that Police Scotland have confirmed it is safe to do so. However, if you are worried, please speak to the on-site police officers.”