Jeremy Corbyn was accused of plotting a ‘desperate’ coup last night after he demanded MPs make him caretaker prime minister to stop a No Deal Brexit.

In an extraordinary letter to rebel Tories and opposition parties, Mr Corbyn said he was ready to lead a ‘strictly time-limited’ government to secure an extension to Article 50.

Mr Corbyn pleaded for support to bring down Boris Johnson with a Commons vote of no confidence, saying he would then stop No Deal before ultimately calling a general election – and campaigning for a new referendum.

Embarrassingly for the Labour leader, Lib Dems leader Jo Swinson rejected the plea out of hand, saying it was not a ‘serious attempt’ to stop No Deal. 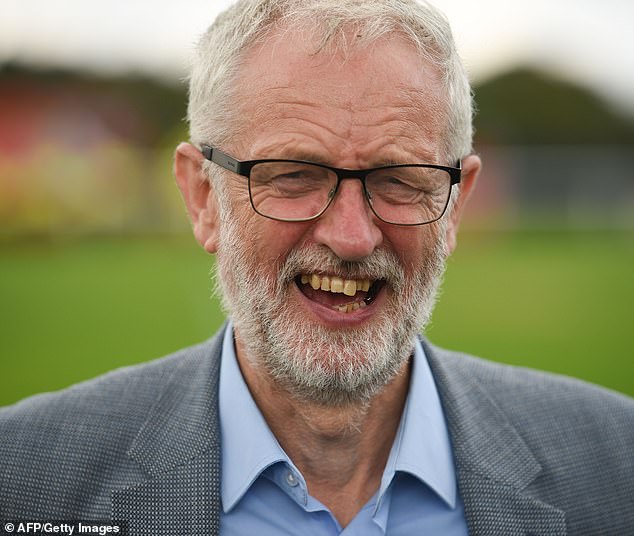 No laughing matter: Mr Corbyn was accused of plotting a ‘desperate’ coup after reaching out to rebel Tories in a bid to be made caretaker prime minister

It came after an extraordinary war broke out yesterday between No 10 and Philip Hammond over Mr Johnson’s Brexit strategy.

Criticism from Mr Hammond drew a stinging rebuke from Mr Johnson’s allies, with the Prime Minister himself accusing Remainer MPs and Brussels of a ‘terrible kind of collaboration’.

The former Chancellor had infuriated Downing Street by claiming the Government had no mandate for No Deal, that Parliament would stop it, that ‘unelected people’ were wrecking any hope of an agreement and that a No Deal Brexit would be ‘as much a betrayal’ of the referendum as not leaving at all.

In his letter, Mr Corbyn also said there was no mandate for No Deal, and he wanted a confidence motion ‘at the earliest opportunity’. He vowed that Labour would campaign in the ensuing general election for another public vote on Brexit – which would include the option to Remain. 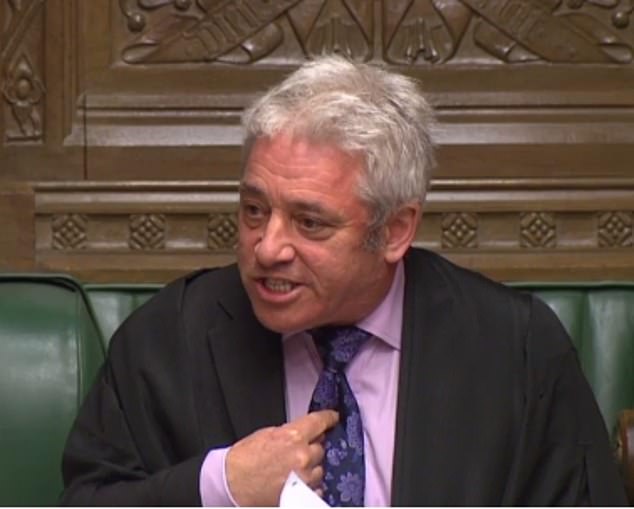 John Bercow, speaker for the house of commons is adamant that there will be no suspension of parliament to ensure a No Deal Brexit

Tory MPs reacted with fury to Mr Corbyn’s gambit last night, while Downing Street said it was clear the Labour leader would ‘over-rule the referendum and wreck the economy’.

Clear signs that Britain is heading for political turmoil this autumn:

Mr Corbyn’s intervention last night appears to confirm that Britain is headed for a huge Parliamentary showdown this autumn if the European Union does not offer a new deal, and Mr Johnson tries to leave on October 31 without one.

The Labour leader believes he can bring down Mr Johnson with a confidence vote if he tries to go for No Deal, but many MPs are profoundly uneasy about him being the head of a so-called ‘unity government’ to replace him. His letter last night appeared to represent a desperate plea for support.

In a clear pitch to the Remain wing of his party, Mr Corbyn said Labour would campaign in any election for a second referendum on EU membership with the option to Remain being available to voters.

While Labour figures have made clear that this would be the party’s approach, Mr Corbyn had not previously set it out formally.

Last night, former Tory leader Iain Duncan-Smith said: ‘Corbyn realises he isn’t going to win the vote of confidence because no other party trusts him. He is desperate to win the vote and this is him in a panic.’

‘He stood on a manifesto promise at the last general election to leave the EU and honour the result of the referendum. He will do anything to grab power to inflict his Marxist extremism on the country – even ditching his promises to voters. Nobody would ever forgive any Conservative MP who acted to bring about a Marxist prime minister. This is a Marxist attempted coup.’

Tory MP Ben Bradley said: ‘The idea that there’s a Commons majority for a Corbyn government is pretty laughable.’ Colleague Nigel Evans added: ‘Stopping Corbyn should be the No 1 ambition of every Conservative MP – him as PM would be an economic earthquake which would have Venezuela-style consequences for a generation or more.’ 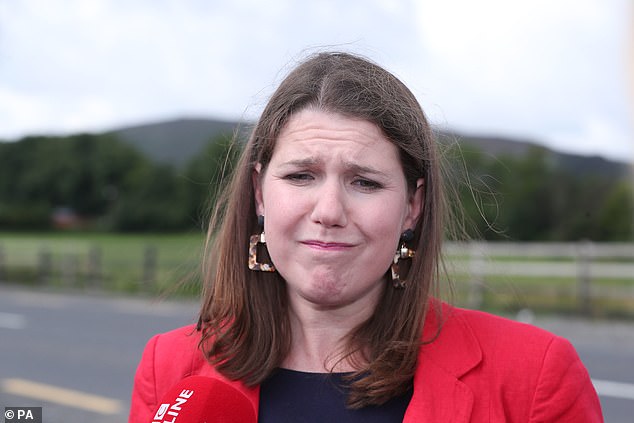 Lib Dem leader Jo Swinson has dismissed Mr Corbyn’s letter, saying it was not a ‘serious attempt’ at preventing a No Deal Brexit

Miss Swinson dismissed Mr Corbyn’s letter as a ‘nonsense’, adding: ‘Jeremy Corbyn is not the person who is going to be able to build an even temporary majority in the House of Commons for this task – I would expect there are people in his own party and indeed the necessary Conservative backbenchers who would be unwilling to support him.’

Plaid Cymru’s Westminster Leader, Mrs Saville Roberts, said: ‘We are very much open to the idea of a unity government. It doesn’t matter who leads it, but its No 1 priority must be stopping Brexit. It’s extremely disappointing, therefore, that Mr Corbyn cannot bring himself to take the best possible pro-European option – a referendum first, followed by a general election.’

Last night it was claimed Labour MPs opposed to a second referendum were ready to back a compromise Brexit deal based on the withdrawal agreement that MPs previously voted against. Stephen Kinnock, who co-ordinates about 30 MPs in a group called Respect the Result, said he believed that passing the withdrawal agreement was the most certain way of stopping the UK crashing out without a deal.