Labour will break with tradition at the start of its party conference next week and play the National Anthem – despite fears that some delegates could boo.

Party sources confirmed last night that Sir Keir Starmer will open the four-day event in Liverpool with a tribute to the Queen.

It is understood the National Anthem decision came only after intense discussions by party managers over how ‘God Save the King’ would be received in the conference hall.

The Mail on Sunday can reveal that one key adviser even warned that Sir Keir should begin the tribute by appealing to Labour delegates ‘not to boo’ the anthem.

Last night, one Shadow Cabinet member ridiculed the advice, saying: ‘I know the Labour Party is bad but we’re not so bad you have to tell us not to boo the National Anthem a week or so after the Queen died.’

However, several Labour MPs ignored party guidance last week to suspend campaigning and party activity, and make no media comment beyond tribute to the Queen.

In an intervention that will infuriate Sir Keir, Left-wing MP Clive Lewis said the notion of the Royal Family as a symbol of duty or sacrifice was a ‘lie’. 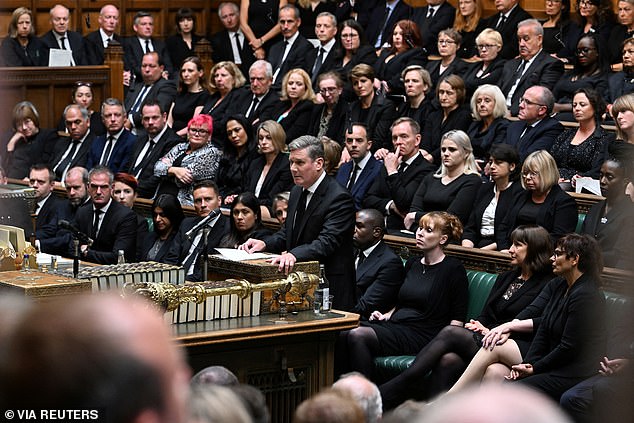 Labour will break with tradition at the start of its party conference next week and play the National Anthem – despite fears that some delegates could boo. Pictured: Sir Keir pays tribute to the Queen following her death

He said his initial response to people queuing for hours to file past the Queen’s coffin was ‘bemusement followed by a touch of despair’.

There are also warnings from a Shadow Minister that although the conference hall will ‘probably be fine’, a row over the Crown could erupt on the conference fringe.

Labour is riding high in polls but Left-wingers are furious at Sir Keir’s apparent failure to fall four-square behind striking unions.

There may also be a bid to change Labour rules to allow ex-leader Jeremy Corbyn – forced to sit as an Independent MP – to be the party’s official candidate in his Islington North seat at the next election.

Fears that conference will back scrapping Britain’s first-past-the-post electoral system with proportional representation were played down last night. Sources said key unions were now keener on ‘getting Labour in power’ than having a conference row with the leadership.

But Tory MPs still fear a weak minority Government led by Sir Keir would do a deal with Liberal Democrats to introduce proportional representation and lock the Conservatives out of power.

SIR KEIR STARMER: Tributes to the Queen in parliament were a poignant display of how our country and our politics has far more that brings us together than divides us

It was when I had the honour of attending the Platinum Jubilee celebrations this year that I began to reflect on what the Queen’s reign has meant for our country.

As we marked 70 glorious years, it seemed impossible to imagine a Britain without her. Of course, we knew she wouldn’t go on for ever.

But the vast majority of us have never known another Monarch, which is why the shock of her loss is so acutely felt.

She seemed as permanent a feature of our country as the mountains near Balmoral – the place she loved so much.

Britain is facing difficult times. Whether it is the rising cost of living or the spectre of war in Europe, people are worried.

The loss of our Queen robs us of the nation’s stillest point, its most steadying influence, at a time when so much seems to be in flux. But the response we have seen over the last week has been heartening and has reflected the nation she knew and served.

Tributes in Parliament were a poignant display of how – despite many disagreements – our country and our politics has far more that brings us together than divides us.

King Charles’s tour of the country has shown that while we can mourn the end of one era, we can still look forward to a new one. 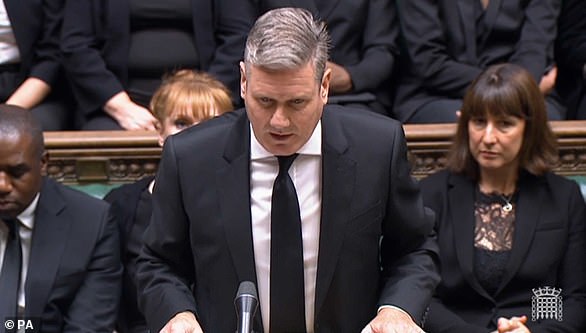 And the way people from all walks of life have patiently queued to say one final goodbye has reminded us of the quiet decency of this country – befitting of the late Queen’s life.

Underpinning it all is a deep respect. A British respect. For a family grieving, for the Monarchy, for public service and for each other. Of that we can be proud.

Over the last few years, Britain has been tested time and again. No one believes it is suddenly going to get easier.

But the crises of the last few years have taught us that when we pull together we are strong enough to get through. Our collective spirit saw us through the dark days of the pandemic. That collective spirit has been on display again this week.

There are those who look at Britain and see a country that is simply about tradition and ceremony.

That is only half the story. The other half is about evolution and adaptation. Of matching the times we find ourselves in. Of being proud of our history but embracing the future.

That is what Queen Elizabeth’s reign will be remembered for: a steadying, guiding influence during a period of huge change.

Those essential parts of our national character – our openness, pride, spirit – are what convinces me that Britain’s best days can still lie ahead of us.

Dare I say, I think that is what Queen Elizabeth would want us to think too.