Les Cameron roams the maze of rooms of his big, old country pub, the Commercial in Terang, inviting you to imagine a creative sanctuary in the making.

The western Victorian hotel’s rooms, in these COVID-19 days, are all but empty.

But Cameron, who bought the hotel in 2018 and transformed it into a popular cultural and social venue, sees a future when the Commercial is alive with resident artists, writers, musicians and performers, all of them freed of financial care. 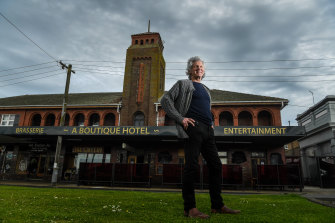 Les Cameron will welcome artists-in-residence to the Commercial Hotel in Terang.Credit:Justin McManus

Here is a gallery and dining room; there a performance space that doubles as a cinema. An office is set up to record podcasts; another is a guitar-strewn music recording studio. There are lounges for dreaming. Kitchens for sustenance. Upstairs are comfortable bedrooms.

Cameron is a former North Melbourne footballer, country coach — he led Koroit to its first Hampden League premiership in 1971 — and teacher with a reputation for bringing out the best in his charges. He was enthused recently when he read an article in The Age about the famous Paris bookstore, Shakespeare and Company.

The bookshop for decades has provided free beds to artists and writers under the slogan “be not inhospitable to strangers lest they be angels in disguise”. 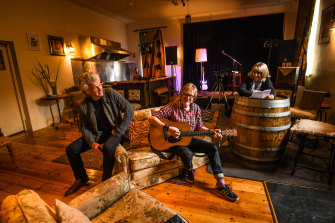 Cameron and his collaborator, Rosemary Knight, already practised that approach.

A musician and actor named Jim Williams turned up to do a gig a couple of years ago and never left. Williams’ accommodation is free.

In return, he has become the hotel’s resident guitarist, and he and Knight help run a community theatre group for disabled people.

When international backpackers stayed at the hotel while working on surrounding farms, Cameron and Knight couldn’t bear to witness their isolation. They arranged for local families to befriend and invite the travellers into their homes. Lasting friendships formed. 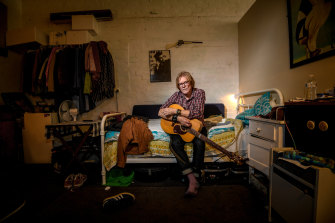 Resident musician Jim Williams came to the hotel for a gig and never left.Credit:Justin McManus

Cameron now envisions his whole hotel, which opened on its site almost 180 years ago, becoming a refuge for creatives needing a place to complete their works.

He and Knight have just purchased the old Terang courthouse, right across the road from the Commercial Hotel. It, too, will become a performance space.

“COVID has been such an awful time for creative people,” Cameron says. “So many performers and musicians have just had to sit there, locked down, their gigs and their shows cancelled, no money coming in, waiting for a better time.

“There are 12 double rooms here.

“When the state opens up [from its COVID restrictions], we plan to offer 12 fellowships that might be for three, six or 12 months, to people who need a place to develop their creative projects, whatever that might be.

“They would get a room to stay, the use of performance space and a stipend.” 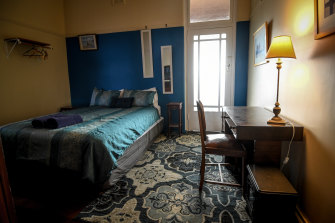 One of the hotel’s rooms that will be made available rent-free for artists.Credit:Justin McManus

“Their only obligation would be to present the outline of whatever project they plan to undertake,” he says.

“They’ll get the benefit of being welcomed into a small country community. In return, the local community gets the benefit of welcoming creative people into the life of Terang and its district.”

For millenia, it was a traditional home of the Girai Wurrung (or Kirrae Wurrong) First People.

Its tree-lined streets these days boast gracious, historically important buildings that speak of a time when Terang was a wealthy rural centre servicing large pastoral holdings.

If Cameron and Knight have their way, the old town will soon be able to add “cultural renaissance” to its considerable history.