Liz Truss resigns LIVE: PM makes No10 statement to announce she will be quitting after just 44 days in charge – with leadership election to replace her ‘to be delivered within next week’

Follow MailOnline’s live blog below for the latest updates as Liz Truss battles to save her career.

Liz Truss will be the shortest serving prime minister in British history.

She has currently clocked up 44 full days in the role – a long way behind the next shortest premiership, that of Tory statesman George Canning, who spent 118 full days as PM in 1827 before dying in office from ill health.

Ms Truss was to have overtaken this number of days on January 3 2023.

But instead she will fall short by more than two months, with the next prime minister due to be elected within the next week. 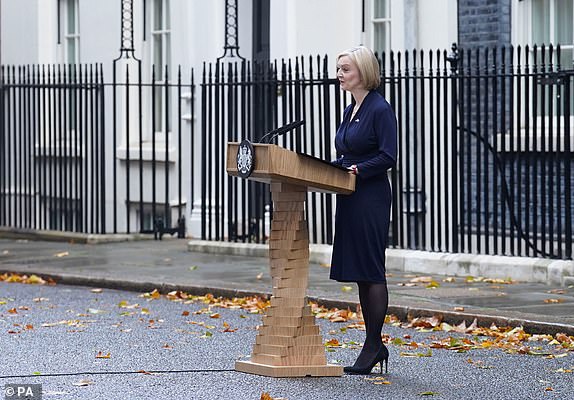 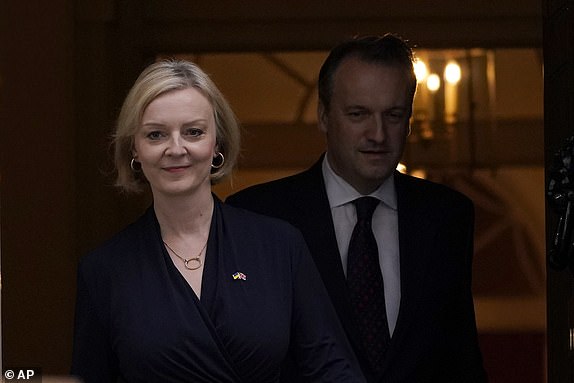 ‘I came into office at a time of great economic and international instability. Families and businesses were worried about how to pay their bills.

‘Putin’s illegal war in Ukraine threatens the security of our whole continent. And our country has been held back for too long by low economic growth.

‘I was elected by the Conservative Party with a mandate to change this – we delivered on energy bills and on cutting national insurance.

‘And we set out a vision for a low-tax, high-growth economy that would take advantage of the freedoms of Brexit.

‘I recognise though, given the situation, I cannot deliver the mandate on which I was elected by the Conservative Party.

‘I have therefore spoken to His Majesty the King to notify him that I am resigning as leader of the Conservative Party.

‘This morning I met the chairman of the 1922 Committee, Sir Graham Brady. We have agreed that there will be a leadership election to be completed within the next week.

‘This will ensure that we remain on a path to deliver our fiscal plans and maintain our country’s economic stability and national security.

‘I will remain as Prime Minister until a successor has been chosen. Thank you.’

The Labour leader said: ‘The Conservative Party has shown it no longer has a mandate to govern.

‘After 12 years of Tory failure, the British people deserve so much better than this revolving door of chaos. In the last few years, the Tories have set record-high taxation, trashed our institutions and created a cost-of-living crisis.

‘Now, they have crashed the economy so badly that people are facing £500 a month extra on their mortgages. The damage they have done will take years to fix.

‘Each one of these crises was made in Downing Street but paid for by the British public. Each one has left our country weaker and worse off.

‘The Tories cannot respond to their latest shambles by yet again simply clicking their fingers and shuffling the people at the top without the consent of the British people. They do not have a mandate to put the country through yet another experiment; Britain is not their personal fiefdom to run how they wish.

‘The British public deserve a proper say on the country’s future. They must have the chance to compare the Tories’ chaos with Labour’s plans to sort out their mess, grow the economy for working people and rebuild the country for a fairer, greener future.

‘We must have a chance at a fresh start. We need a general election – now.’ 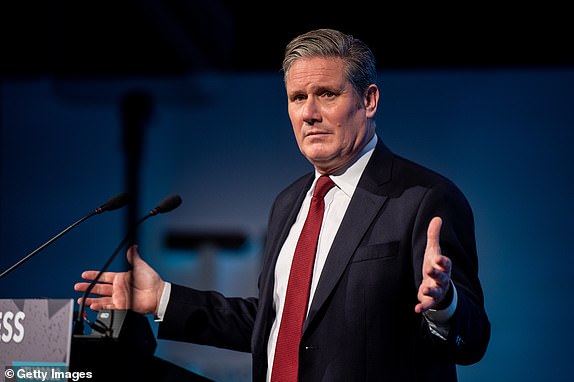 Speaking outside No10, Liz Truss said: ‘I recognise… given the situation I cannot deliver the mandate on which I was elected by the Conservative Party.’

She adds: ‘This morning I met the chairman of the 1922 Committee, Sir Graham Brady.

‘We’ve agreed that there will be a leadership election to be completed within the next week.

‘This will ensure that we remain on a path to deliver our fiscal plan and maintain our country’s economic stability and national security.

I will remain as Prime Minister until a successor has been chosen. 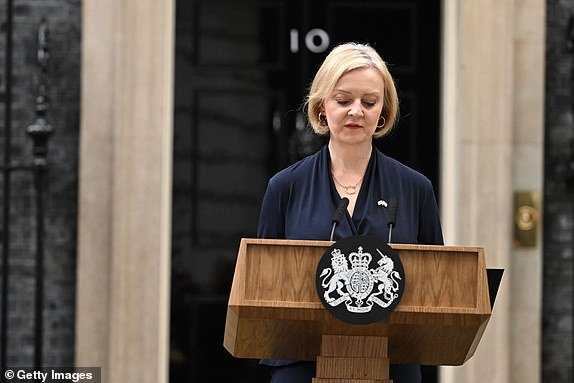 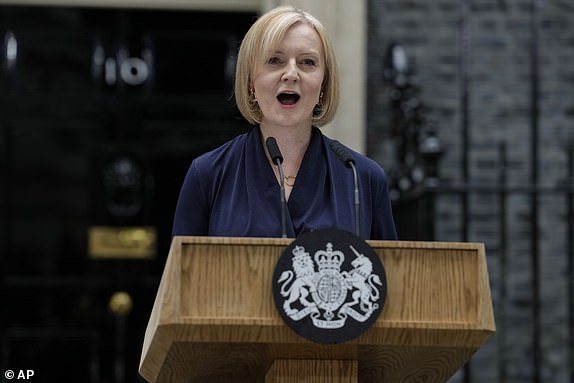 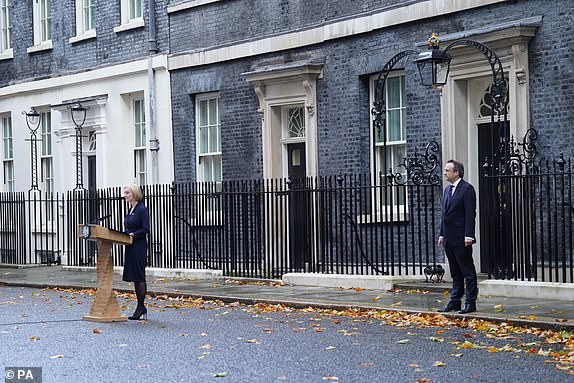 Truss QUITS after just 44 days in No10: PM admits she can’t carry on after crisis talks

After just 44 days in No10, the PM took to a lectern outside the famous black door to confirm her departure.

Saying she had informed the King of her decision, she said: ‘I cannot deliver on the mandate…. I will remain as PM until a successor has been chosen.’

Speaking outside Number 10, Liz Truss has announced she is stepping down as Prime Minister after just six weeks.

A leadership election will be ‘completed in the next week’, she adds. 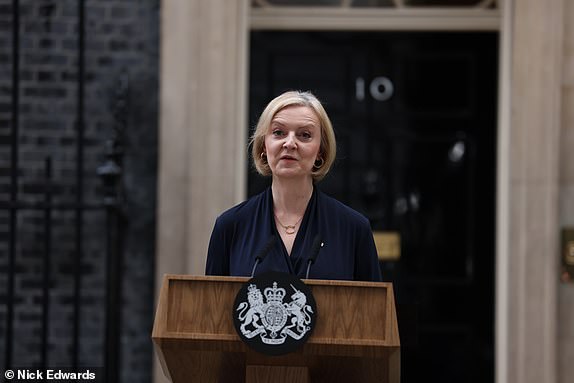 The Tory MP for Eastleigh just tweeted: ‘I joined the Conservative Party to deliver for the great people of this country.

‘The Prime Minister cannot do that. The last few days have left me in despair.

‘I believe the Prime Minister should resign and have written my letter to Sir Graham Brady.’

The Prime Minister will give a statement at 1.30pm, Sky News reports.

A lectern has now been placed in front of the entrance to No10. 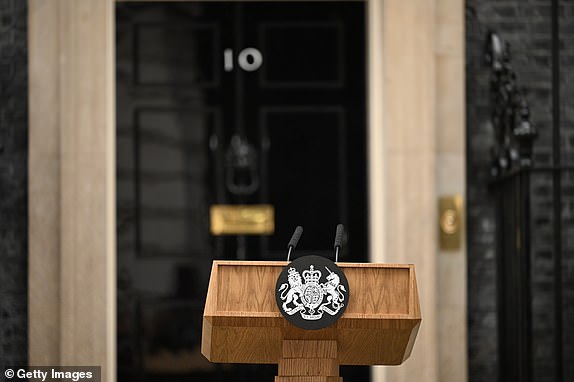 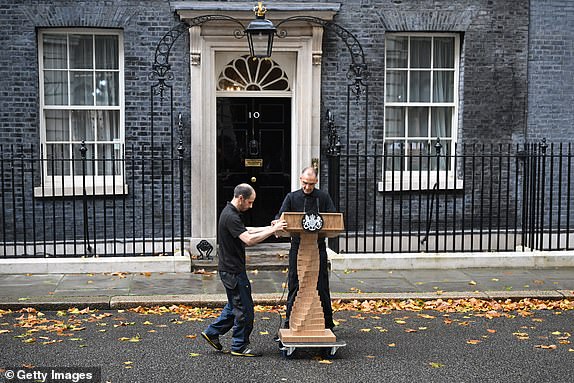 Conservative Ruth Edwards has told Liz Truss to “step aside, go, and let someone who is up to the task” become Prime Minister.

The Rushcliffe MP wrote on the ConservativeHome website: “The Prime Minister has shown breath-taking economic and political incompetence during her short tenure in office.

It is not responsible for the party to allow her to remain in power. Not when her actions can have such detrimental consequences for our constituents.

‘So I add my small voice to the groundswell of others. Step aside, go, and let someone who is up to the task take on the great privilege and responsibility of leading our great country and party.’

She also says Chief Whip Wendy Morton did in fact resign during Wednesday’s chaos in the Commons.

‘I walked up to the Chief Whip to try and clarify what was going on. She cut me off mid-sentence “I don’t have to talk to you, I’ve resigned”, Ms Edwards wrote. 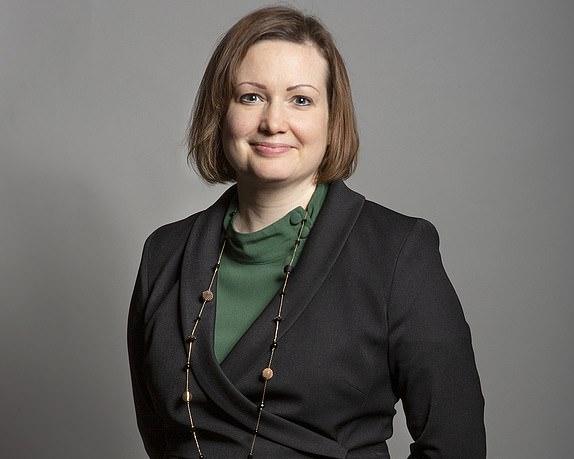 Pound slides to its lowest against the dollar this week at $1.12… while gilts rise again

The chaotic Tory government crashed the pound again after a shameful display in the commons saw MPs call for Liz Truss to quit.

Last night the FTSE 100 slipped into the red as the UK’s inflation rate hit another 40-year high in September.

A convoy of black cars flanked by police motorbikes has sped past the back entrance of No 10.

The chaos surrounding Liz Truss today has at its heart one seemingly straightforward question: what does the Conservative Party do with her?

The Tories have two equally basic answers to that question: they either find a way to get rid or her or step back and keep her in power, however unpalatable that seems.

But it is there than any sort of simplicity disappears. Ms Truss yesterday vowed that she is a ‘fighter, not a quitter’ and suggested she wants to fight on to the next election.

Mr Blunt, a former minister, said: ‘It is holy untenable. If she doesn’t understand that then I would be astonished.

‘But one of the qualities she has shown is a lack of self-knowledge through this whole process.

‘It ought to have been clear that she did not have the capacity to lead her party and I don’t think that she should have put herself up for the leadership in the first place.’

Here are the Tories openly calling for the PM to quit – although many more have made their views clear privately.

Liz Truss is engaged in an increasingly desperate struggle for survival today as the 1922 committee chief headed into Downing Street for talks.

Sir Graham Brady is in No10 meeting the PM after 24 hours of carnage that saw the Home Secretary quit, confusion over whether the Chief Whip had followed her out of the door, and MPs wrestling in Commons voting lobbies.

No10 sources said the premier invited the party shop steward in for a discussion following a ‘difficult day’ – but denied that she has any intention of resigning.