Liz Truss will consider removing VAT from energy bills as officials work up a cost of living package for the new prime minister.

The Foreign Secretary said she would act ‘as soon as possible’ with an emergency budget and was ‘determined to help people across this country through what will be a very difficult winter’.

Asked if she would consider removing VAT from energy bills, saving families around £210, she said: ‘There will be a budget on an urgent basis to deal with the issues we face. All of these issues need to be under consideration.’

Miss Truss declined to go into detail about how much support she would hand out, but repeated her pledge to ‘let people keep more of their own money’ through lower taxes. 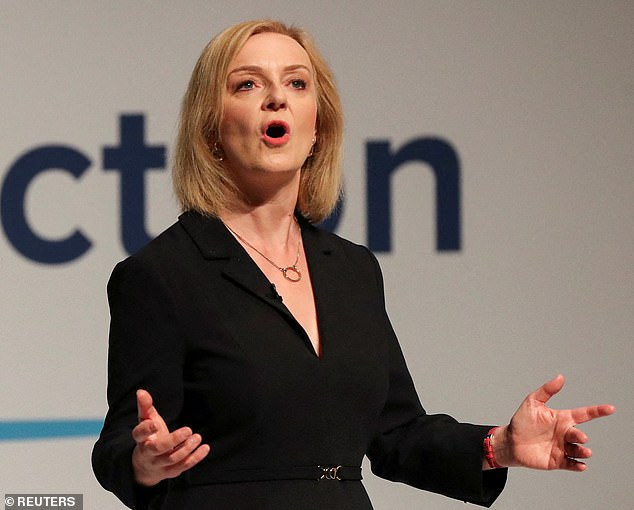 Families are braced for energy bills to hit £3,582 per year from October, rising to more than £4,200 in the new year.

Rishi Sunak – who has promised support worth ‘hundreds of pounds’ per household – hit back, saying her offer of targeted support was a ‘massive U-turn.

Treasury officials were tasked ‘a few weeks ago’ with coming up with a ‘detailed suite of options’ to offer to the new administration, a source said yesterday.

The Chancellor Nadhim Zahawi and the Business Secretary Kwasi Kwarteng have summoned energy bosses to Whitehall to ‘knock heads’ on household prices and their massive profits.

In tomorrow’s meeting, energy executives will be asked to submit breakdowns of their expected profits and their investment plans for the next three years.

There has been anger at Shell, BP and British Gas owner Centrica announcing bumper financial results as households struggle.

Mr Zahawi said: ‘It’s important we all get round the table. I want to challenge them – to say are you making the investment? How can you help your customers? What more can we do together?’

Treasury sources suggested the meeting could lead to a toughening up of the £5billion windfall tax on energy producers, although this is opposed by leadership frontrunner Miss Truss.

Education secretary James Cleverly added: ‘The Chancellor of the Exchequer and the Business Secretary are actually calling in the leaders of those big energy companies to knock some heads together and basically hold them to account about what they’re going to do with those profits.’

Mr Zahawi also said the Treasury had begun preparing ‘options’ for the next prime minister to consider when they take up their post on September 5.

Government sources said ‘the aim is to have a detailed suite of options ready to go quite swiftly’, including handing out cash through the benefits system or via rebates on bills and council tax.

Yesterday Miss Truss was challenged by a GB News viewer who was ‘terrified’ over how she will keep her 73-year-old mother warm this winter. Another said he had to take a second job at the weekend after his bills soared from £180 per month to over £500 in October.

Miss Truss said: ‘I will make sure we reverse the National Insurance rise, that we have a moratorium on the green energy levy and immediately save on fuel bills.’

Mr Sunak had promised ‘hundreds of pounds’ more for households’ energy bills and has pledged to cut bills by £210 by removing VAT on fuel. Leaked Government plans for a ‘reasonable worst case scenario’ revealed blackouts in January if gas supply falls