Lloyd Austin said in an interview that aired Sunday that some intelligence assessments predicted the Taliban would gain control of Afghanistan within months of a U.S. troops withdrawal – in stark contrast to President Biden’s July claims there were no such reports.

‘I know the president has said that the intelligence absolutely did not show that anybody – that the Taliban could take over in 11 days. What’s the earliest you were aware that that could happen?’ ABC News’ Martha Raddatz asked the Defense secretary in a pre-taped interview.

‘There were assessments that ranged initially from one to two years to, you know, several months, but it was a wide range of assessments,’ he replied.

Austin also said that not one entity predicted that the Islamic militant group would reemerge with such force and be able to take over the lion’s share of the country in less than two weeks.

‘This all occurred in a span of about 11 days,’ he said of the takeover. ‘Nobody predicted that, you know, the government would fall in 11 days.’

He added that the evolving situation made it increasingly harder for intelligence and military officials to accurately assess the final outcome.

‘As the Taliban began to make gains, and then we saw that in a number of cases, there was less fighting and more surrendering and more forces just kind of evaporating, it was very difficult to predict with accuracy,’ Austin said.

‘Your own intelligence community has assessed that the Afghan government will likely collapse,’ a reporter said to the president during the July 8 press conference.

Biden fired back by saying, ‘That is not true.’

‘They did not reach that conclusion,’ the president insisted, which appears to be inaccurate based on Austin’s comments. 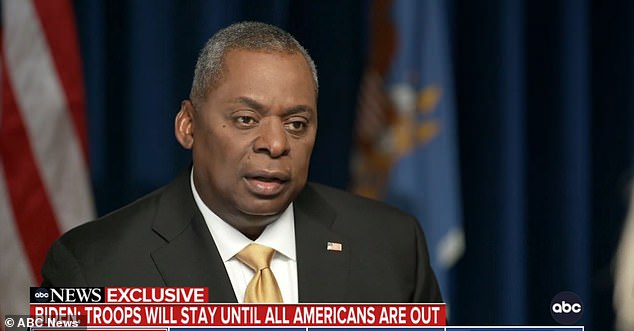 Defense Department Secretary Lloyd Austin said in an interview that aired Sunday that intelligence assessments concluded the Taliban would take over Afghanistan from months to years after U.S. withdrawal 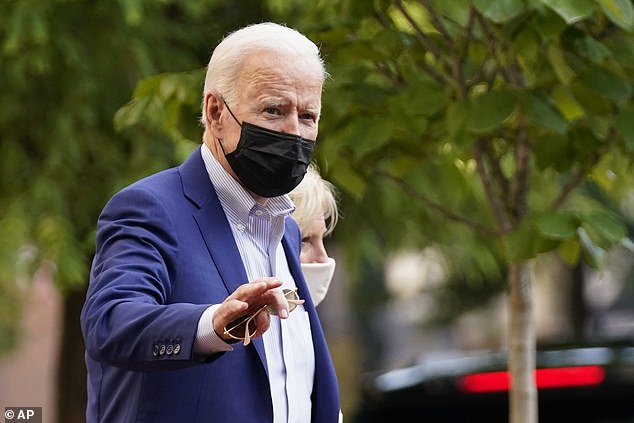 The comments are a stark contrast to President Joe Biden’s July claims ‘that [it] is not true’ his intelligence community assessed that the Afghan government will likely collapse. Biden and first lady Jill leave church in Washington, D.C. on Saturday

‘The Afghan government and leadership has to come together,’ Biden said at the time of the press conference. ‘They clearly have the capacity to sustain the government in place. The question is: Will they generate the kind of cohesion to do it?’

Another reporter asked during the press conference last month: ‘Is the Taliban takeover of Afghanistan now inevitable?’

‘You have the Afghan troops at 300,000 – well equipped, as well as any army in the world – and an Air Force, against something like 75,000 Taliban. It is not inevitable,’ he explained.

Since the botched withdrawal, Biden has attempted to deflect blame to his predecessor and the Afghan security forces and has seemed to forget many details involved with his decision to get all troops out of Afghanistan by August 31. 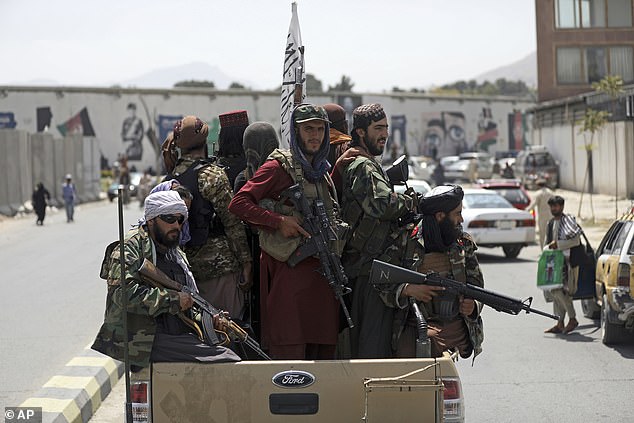 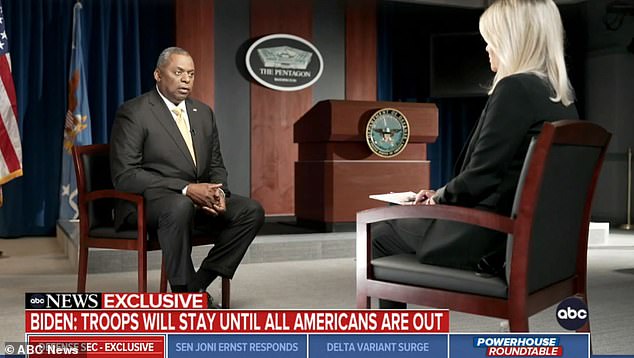 ‘This all occurred in a span of about 11 days,’ Austin told ABC News’ Martha Raddatz. ‘Nobody predicted that, you know, the government would fall in 11 days’

Biden said in his first interview after the Taliban took over the country that he couldn’t ‘recall’ if he was warned to maintain a troop presence in Afghanistan.

During the same interview he insisted that ‘no one is being killed’ at the Kabul airport despite at least a dozen confirmed deaths associated with the chaotic scenes.

He also admitted that would have still pulled troops from Afghanistan without former President Donald Trump’s deal to get everyone out by May 1 – in a reversal of his repeated finger-pointing at his predecessor for the chaos.

‘Your top military advisers warned against withdrawing on this timeline – they wanted you to keep about 2,500 troops,’ ABC’s George Stephanopoulos said to Biden in an interview that aired Thursday.

‘They didn’t tell you they wanted troops to stay?’ Stephanopoulos asked.

‘No, not in terms of whether we were going to get out in a time frame – all troops, they didn’t argue against that,’ Biden reiterated.

There were multiple warnings from top brass and military intelligence officials who cautioned against a total withdrawal from Afghanistan, claiming the situation was ripe for the Taliban to take over.

Reports emerged last week that Biden knew the risks of a total troop pull out and went forward with it anyway despite objections and warnings from his team.

Biden said in the interview that chaos in Kabul was inevitable – months after saying it was not – and snapped at a question over photos of Afghans falling from planes and packing a C-17 while trying desperately to flee the Taliban.

The president’s performance was blasted from all arenas with Republicans and Democrats branding Biden ‘shameful’ and calling for him to ‘take responsibility’ for the scenes of violence and disorder in recent days as thousands attempted to flee while the Taliban advanced.

‘We have control of the airport now,’ Biden said at one point during the interview last week as he lauded what has been widely viewed as missteps in evacuating Americans and allies from Afghanistan.

Stephanopoulos pushed back: ‘Still a lot of pandemonium outside the airport.’

‘Oh, there is,’ the president admitted in the interview.

So far there are a dozen confirmed deaths since the Taliban took over Kabul on Sunday when Afghan President Ashraf Ghani fled the country – including a 14-year-old girl who was trampled to death in a stampede.

Others were killed when they were run over by aircraft rolling down the runway at the Kabul airport, two were shot by U.S. military personnel and two others plummeted to their deaths from a U.S. Air Force plane last Monday as they clung to the side of the aircraft when it taxied away from Hamid Karzai International.

Of the horrific scenes at the airport, Biden dismissed it as something of the past.

‘We’ve all seen the pictures. We’ve seen those hundreds of people packed into a C-17. You’ve seen Afghans falling –’ Stephanopoulos said before being cut off by the president.

‘That was four days ago, five days ago,’ Biden shot back.