London: Beach volleyball underneath the Eiffel Tower. Swimming in the Seine. Skateboarding and breakdancing at Place de la Concorde. Archery outside the Tomb of Napoleon. And equestrian events in the courtyard at the Palace of Versailles.

France is planning a sporting extravaganza like no other and the stakes couldn’t be higher. As the first real test of the new slimmed-down Olympics model, success at the 2024 Paris Games would prove well-known hosting pitfalls like budget blowouts and white elephant infrastructure don’t have to be the norm. 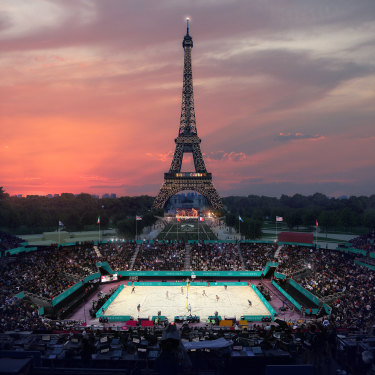 And artist impression of the proposed Eiffel Tower Stadium, which will host beach volleyball for the Olympics and blind football for the Paralympics.

“I think the hashtag here for us should [be] ‘no pressure’,” says Lambis Konstantinidis, the Paris 2024 director of planning and coordination.

“There is a lot of expectation on us that these Games should work, be spectacular and be economically responsible. It is a very significant ambition and we feel the responsibility.”

Seventy per cent of venues used for the Paris Olympics will be existing, 25 per cent temporary and just 5 per cent new, meaning the construction budget of €3.4 billion ($5.4 billion) is for the first time smaller than the separate operating budget of €3.9 billion. 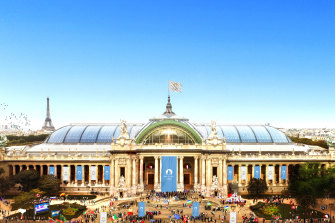 The Grand Palais will host fencing and Taekwondo.

The construction funds will go towards reconfiguring existing buildings like the Grand Palais on the Champs-Élysées into the venue for fencing and taekwondo, placing temporary stadiums on the wide green spaces around the Eiffel Tower, and turning Pont d’léna – a bridge spanning the River Seine – into the focal point for road cycling and some athletics. City authorities are even cleaning up a stretch of the river for the swim leg of the triathlon. 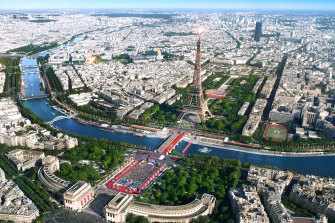 The Pont d’lena Olympics site in the heart of Paris.

Place de la Concorde, the vast square where King Louis XVI was executed during the French Revolution, will be closed off and host new Olympic sports like skateboarding, breakdancing and BMX cycling.

“In 2024, we feel it’s time for the Games to be more open to the public. They won’t be clustered and tucked away in an Olympic Park on the outskirts of the city but actually the sport happening in the heart of the city.

“We have the luxury of beautiful backdrops and the question has been how do we weave sport and action into this beautiful city fabric? That’s what we’re trying to do. 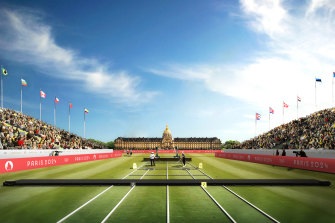 “We are not here to build extraordinary things, even though beautiful architecture is always fantastic. We are here to build things that are meaningful.”

Seine-Saint-Denis, a long-neglected area to Paris’ north, will be home to six sports, the media village and the Olympic and Paralympic village. The accommodation will be turned over for residential use after the Games.

Of the €3.9 billion reserved for planning, organising and delivering the Olympics and Paralympics, the French say 97 per cent will come from the International Olympic Committee, partner companies, ticket sales and licensing. The remaining 3 per cent will be funded by the public and is ringfenced for the Paralympics. 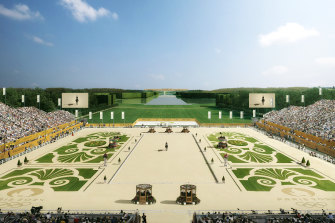 The Palace of Versailles will host equestrian events.

Time will tell whether French organisers can avoid the sort of cost increases which have plagued other Games. The total Paris budget of €7.3 billion compares to the estimated $US15.4 billion ($20.9 billion) minimum cost of this year’s Tokyo Olympics (University of Oxford researchers believe this is a record).

The IOC believes the Brisbane Games in 2032 will demand at least $5.8 billion in funding. Paris officials met with Brisbane counterparts several months ago and will work together as the 2024 Games draw nearer.

Respected sports economist Andrew Zimbalist, who authored Circus Maximus: The Economic Gamble Behind Hosting the Olympics and the World Cup, is sceptical the 2024 Games will really represent a new era and doubts they will be delivered on budget.

“There have been several studies out of the University of Oxford which have looked at cost overruns and they have repeatedly found that the average Olympic Games since 1960 has had a cost overrun of 172 per cent. That means if you come in with an initial bid of $5 billion, it’s going to end up costing you $13.5 billion,” Zimbalist, who is based in the United States, says.

“I’m not predicting anything about what’s going to happen in Paris – I’m just saying when they put out these rosy figures saying the cost will only be €7.3 billion, a lot of questions have to be asked. Based on history, there’s reason for very profound scepticism.”

Konstantinidis insists French organisers won’t spend more than they can raise, and they are on track to secure two-thirds of revenue by the end of this year as planned.

“The messages we are getting from the market and our suppliers is that we should be in a position to make it happen. If we find there might be a risk, then we will address it by reviewing the concept and the service levels and adapt it to our existing budget.”

Organisers are regularly reviewing the budget and have already changed venue plans to shave about €300 million in projected costs. The planning chief also says making the Games more accessible to more people is key to building and keeping public support.

As a nod to the more inclusive nature, the 2024 medals created by French industrial designer Philippe Starck will break into four pieces for athletes to share with their team, family and friends. 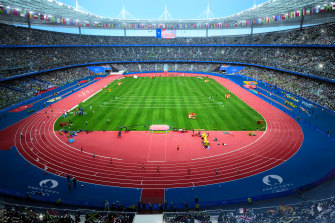 Stade de France, completed in 1998, will host athletics but may not host the opening ceremony.

In another break from tradition, French officials are planning for the opening ceremony to be staged outside the main stadium, with the Seine acting as a spine for the celebrations. Feasibility studies are underway before a final decision later this year.

Tony Estanguet, the president of the Paris 2024 Organising Committee, told reporters at the closing ceremony in Tokyo that the idea was part of the French concept to take sport out of traditional stadiums. 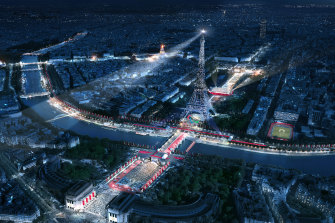 Paris organisers will aim to maximise the city’s landmarks for the 2024 Olympics.

Says Konstantinidis: “The reality is that outside of the host nation, people will always tune in to watch the Olympic Games. But here, the authorities agreed to back the bid on the premise that these Games have to be staged differently, have to be economically responsible, give a tangible legacy and are not going to just do more and more and more.

“More is not necessarily better. And people must be the most important part of what we are doing.”