London: The British capital will be thrown into the highest level of coronavirus restrictions just a fortnight after being released from a nationwide lockdown as health authorities also study a new variant of COVID-19.

Health Secretary Matt Hancock said the mutation "may" be spreading faster in parts of England than the existing strain.

However, he stressed there was "nothing to suggest" the variant would cause more serious disease and said it was "highly unlikely" the strain would not respond to the vaccine being rolled out across the United Kingdom. 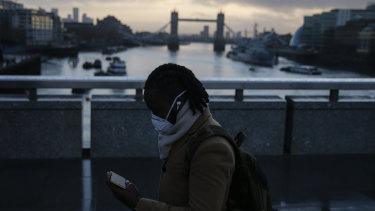 Experts also cast doubt on the seriousness of the development, warning variants had been observed across Europe over recent months and mutations were to be expected.

Chief medical officer Chris Whitty said the new strain had been detected in Kent and parts of London where cases were rising sharply but cautioned its impact on the rate of transmission was not clear.

"It would be surprising, not impossible, but surprising if this had evolved to be able to get around the vaccine," he said.

London will enter tier three restrictions from Wednesday, meaning its pubs and restaurants must close unless they provide takeaway and all households will be banned from mixing indoors.

The increase in the alert level has also shattered the reopening of London's famed theatre district, although shops can continue to trade during the busy Christmas rush.

"Theatres across London will now be forced to postpone or cancel planned performances, causing catastrophic financial difficulties for venues, producers and thousands of industry workers," he said.

COVID-19 caused nearly 3000 deaths in the UK over the past week – an average of about 420 each day. However fears that the second wave would be more severe than the first have not yet eventuated.

About 23,000 people have died since mid-September, bringing the official toll to just short of 65,000.

A recent rise in cases in the areas of England that were spared the worst from the country's second wave in October and November is now fuelling concerns about the Christmas period. Experts fear a deluge of hospitalisations at the height of winter in January.

Restrictions will be temporarily eased across the UK from December 23 to December 27 so that three households can form a "bubble" and legally mix indoors.

More than 34 million people in England are now under tier three – the highest level of restrictions. Some 21 million are under tier two and just 700,000 subject to the most relaxed tier one.

The sharpest rises are in south Wales, London and parts of England's east and south-east. These were the areas that had some of the lowest infection rates during the national lockdown which ended on December 2.

"This is a trend we are seeing in other parts of Europe," Hancock said.

"In countries like Sweden, where nearly all the intensive care beds in Stockholm are currently in use; Germany, where they have had to announce tougher restrictions over the weekend; and the Netherlands who today have announced further measures."

The Netherlands will enter its toughest lockdown of the pandemic later this week amid rising infections and hospitalisations.

Hancock said British authorities had notified the World Health Organisation about the apparent new strain and scientists at a government laboratory were working to learn more about what it might mean.

"Over the past few days, thanks to our world-class genomic capability in the UK, we have identified a new variant of coronavirus which may be associated with the faster spread in the south east of England," he said.

More than 1000 cases had been identified.

"Numbers are increasing rapidly," he said. "Similar variants have been identified in other countries over the last few months."