A videographer accused Los Angeles police of targeting him and another person who were filming as unrest unfolded in the California city on Wednesday night, according to a report.

Vishal Singh and Sean Beckner-Carmitchel were recording a demonstration in downtown Los Angeles, when officers from the Los Angeles Police Department took them into custody, according to the Los Angeles Times. 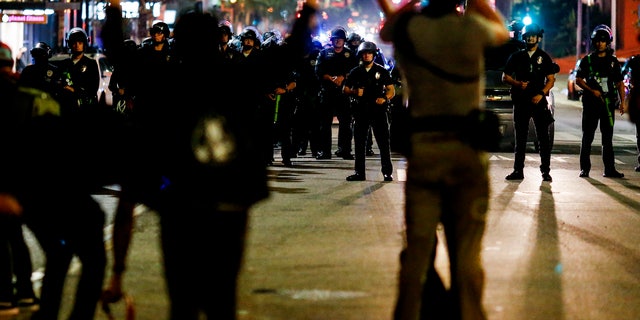 “They very clearly just looked for the people with the cameras who are there the most and just grabbed me,” Singh, who has covered local protests in the past, told the L.A. Times. “As I was livestreaming, I saw multiple officers pointing me out.”

In a post on its Twitter account Wednesday night, the LAPD warned of an "unruly crowd" in the same location and said it had "declared an unlawful assembly and issued a dispersal order in the area." A subsequent post identified a "designated media area," though it is not clear whether the area was designated before or after the pair was cited.

Beckner-Carmitchel later wrote on social media that police knew who he was and called him by name when they arrested him. He said he identified himself as a member of the press and also described how other members of the media were “kettled.”

An LAPD spokesperson would not confirm the specific arrests. According to the Times, Singh and Beckner-Carmitchel were cited for alleged failure to disperse and were released from police custody roughly one hour later.

LAPD spokesperson Capt. Stacy Spell told the outlet the department has recently been confronted with crowds of people who say they are members of the press.

“We are having an ongoing challenge with individuals who are participating in disruptive activities, taking over the street and failing to disperse but subsequently claiming to be media,” Spell told the Times. “Literally the entire crowd claimed to be media.”

An LAPD spokesperson told Fox News on Thursday that 41 adults and five juveniles were arrested and charged with failure to disperse. Three other adults were also booked for open charges of battery on a police officer, narcotics and a misdemeanor warrant.

Police said 30 others were cited for blocking the roadway.