Roughly 40 people were arrested in downtown Los Angeles Tuesday night amid heightened tensions on election night, according to police.

The Los Angeles Police Department said those who were arrested blocked train tracks in the city and failed to disperse after an unlawful assembly was declared.

"Obviously we have a lot of police presence out here due to the election, we're prepared for anything that might come about and we're able to respond right away," said Los Angeles Police Officer Mike Lopez.

In addition to the arrests, police said about 30 people were cited for blocking an intersection before being released.

LAPD early Tuesday had called a "citywide tactical alert" ahead of the election. Around 8:15 p.m., police declared an unlawful assembly, "due to a large and unruly crowd."

Police in riot gear faced off with dozens of protesters who marched towards the Staples Center, before heading to a light-rail station a few blocks away, reports said.

LAPD declared another gathering unlawful shortly after 9:30 p.m., near South Figueroa and West 18th streets. Authorities closed down the area and ordered anyone in the vicinity to "leave immediately." 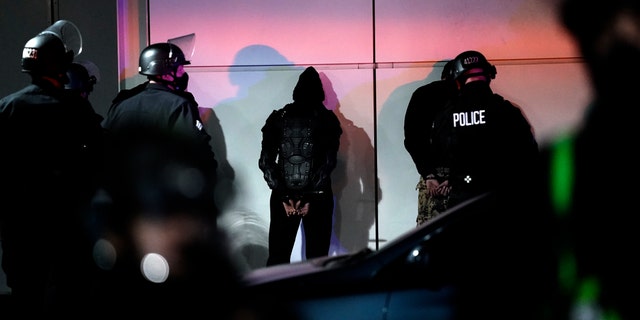 “They were running around downtown causing trouble,” said LAPD Deputy Chief Vito Palazzolo, according to the Los Angeles Times. “We gave them every opportunity to disperse and they chose to remain, so we made the decision to make arrests.”

Others said they were surprised about the dispersals near the Staples Center. Bruce Harper, 52, told the paper he traveled to the area to "take part in the excitement" of Election Day.

“I’m really surprised with what happened at the end,” Harper said. “This was a peaceful gathering. We’ve been here for hours and nothing bad was happening.”

Earlier on Tuesday, the LAPD announced laser pointers or laser-style devices were added to the list of prohibited items for people attending or participating in protests. Police said any violation would result in a misdemeanor.