Jubilation and disappointment took over the streets of Bolivia on Monday, after unofficial counts showed Evo Morales’s party sweeping the country’s presidential election without the need for a second round of voting.

After 11 months of political turmoil that bitterly divided the nation, two independent surveys late on Sunday showed Luis Arce, the candidate for Morales’s Movement Towards Socialism (MAS) party, with more than 50 percent of the vote – well above the second place centrist rival Carlos Mesa, who had slightly over 30 percent, and far more than the requirements to avoid a runoff.

“The result is overwhelming and clear,” Mesa said in a concession speech on Monday. “The difference is wide.”

“It is up to us, those who believe in democracy, to recognise the result,” he said. 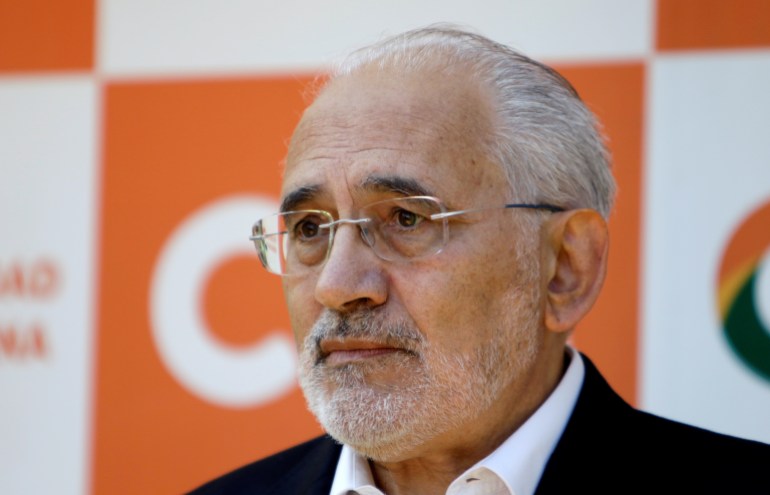 Carlos Mesa ahead of a news conference during which he conceded in La Paz, Bolivia [Manuel Claure/Reuters]On Monday the official count had tallied over 25 percent of votes cast, with official results expected in several days, but candidates said that given the wide winning margin, the final count is unlikely to show a meaningful difference.

Observers said the results showed a clear rejection of the right-wing policies of the interim government of Jeanine Anez, a conservative senator who took office after Morales was ousted from power a year ago. Late on Sunday, Anez conceded and congratulated the winners.

“We still have no official count, but according to the data we have, Mr [Luis] Arce and Mr [David] Choquehuanca [his running mate] have won the election,” Anez wrote in a tweet late on Sunday.

“I congratulate the winners and I ask them to govern with Bolivia and democracy in mind.”

Arce, meanwhile, who is expected to take office sometime next month, called for calm in the polarised nation, and vowed to form a government of national unity.

“We have recovered democracy and hope,” Arce said in a speech early on Monday. “We are going to govern for all Bolivians and construct a government of national unity,” he said. 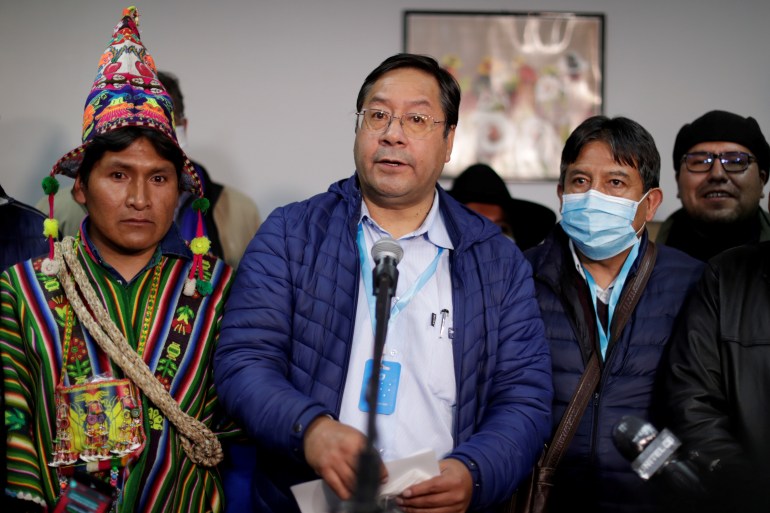 Analysts say the election outcome is chastening for the country’s right wing, and will likely boost the image of Morales, whose shadow still looms large over the country, despite him living in exile in Argentina since his narrow win in last year’s election was annulled amid bloody protests and allegations of fraud.

Morales and his supporters say he was the victim of an orchestrated coup.

“This was a punishment vote,” said Raul Penaranda, a journalist and political analyst based in La Paz.

“Those who abandoned the MAS last year were thinking ‘if this is the alternative, then no, we prefer what we had before,’” Penaranda said.

Morales, Bolivia’s first indigenous leader, was an iconic, popular figure during his 14 years as president. But he angered many Bolivians after insisting on running for a fourth term in office, in defiance of a referendum against extending term limits. His administration was also marred by allegations of corruption and overreach of power.

Anez, who declared herself interim president promising swift new elections, sought to consolidate her grip on power and announced her own bid for the presidency, after initially saying she did not plan to run. 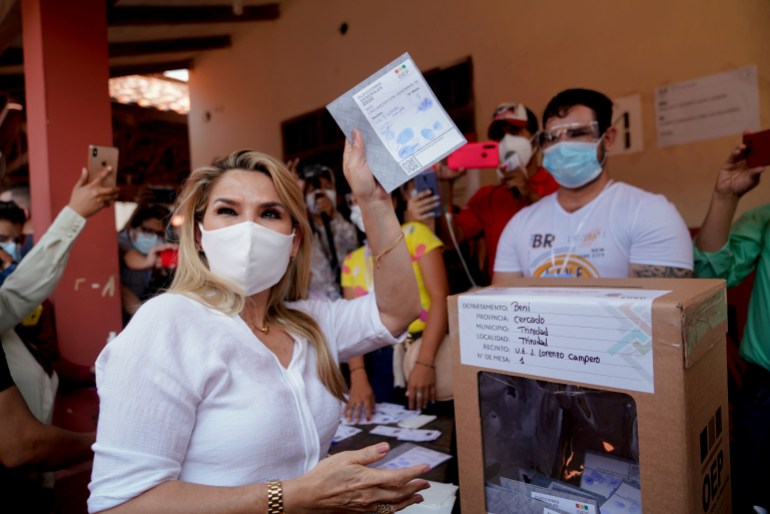 Jeanine Anez voting at a polling station in Beni, Bolivia [Courtesy of Bolivian Presidency/Handout via Reuters]She brought trumped-up terrorism charges against Morales, and clamped down on MAS officials and supporters – prompting allegations of human rights violations by rights groups, and further fuelling polarisation in the country.

Her administration has also been accused of corruption and mismanagement of the COVID-19 pandemic – a disease that has killed at least 8,481 people in Bolivia.

She dropped out of the race last month.

“The government has been very repressive, and for a lot of people there is now a sense of relief,” said Thomas Becker, a human rights attorney with the University Network for Human Rights, who was part of a group of academic observers who travelled to Bolivia.

“The MAS overwhelmingly won, but a lot of it was not necessarily a vote for a candidate but a vote against racism, repression and violence,” Becker told Al Jazeera from La Paz. 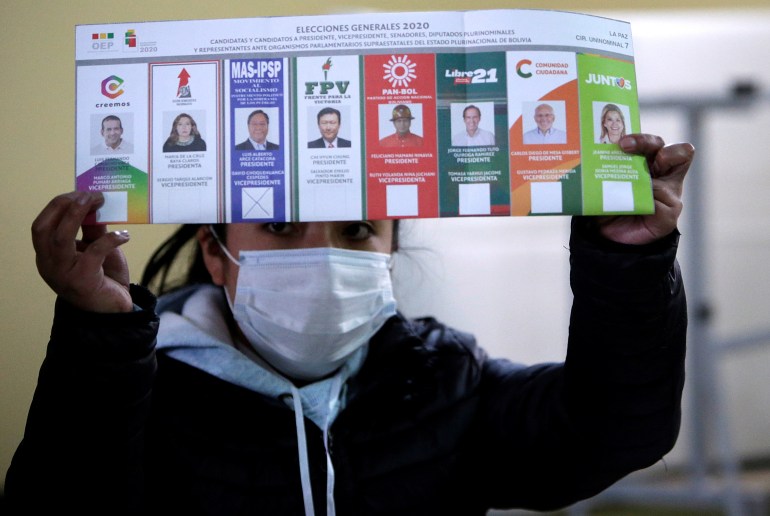 A member of the jury shows a marked ballot during vote counting at a school during the presidential election in La Paz, Bolivia [Manuel Claure/Reuters]Sunday’s vote marks an important turning point for Bolivia, instilling a renewed faith in democracy in the South American nation, said Jorge Derpic, assistant professor in sociology, Latin American and Caribbean studies at the University of Georgia.

“This victory shows even in conditions of disadvantage for the MAS, for the majority of people who were clearly against this government, there is a possibility to produce change through the ballot,” Derpic told Al Jazeera.

“This is a return to the path of democracy, of respect for democratic results, this is something to celebrate in general,” he said. 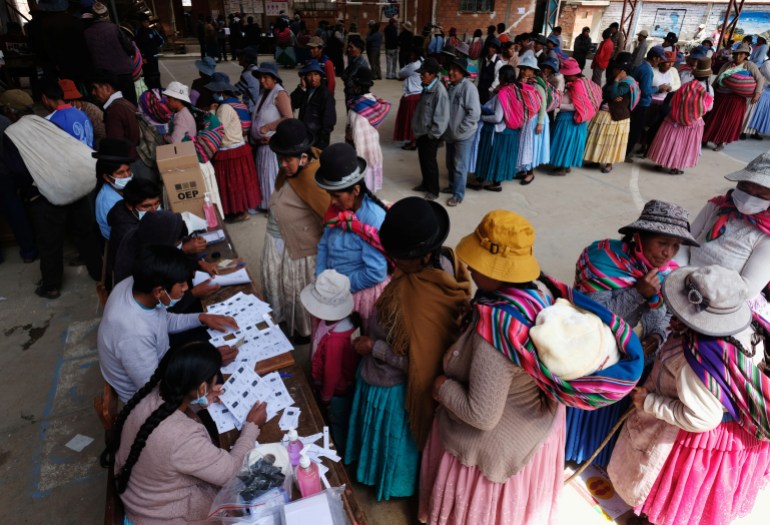 In a news conference in Argentina, Morales said the new government would “return our country on the path of economic, political and social development”.

Arce, who served as economics minister under Morales for more than a decade, oversaw policies that led to a surge in growth and a sharp reduction in poverty. Now, amid a pandemic that twice delayed the election, he is likely to face an uphill battle trying to reignite that growth.

The World Bank forecasts that Bolivia’s economy, largely led by farming and gas, will contract by about six percent this year.

“Bolivia has a stagnant economy and exports are flat,” Gamarra said, adding that the country may turn to exporting its lithium deposits, which will take time. 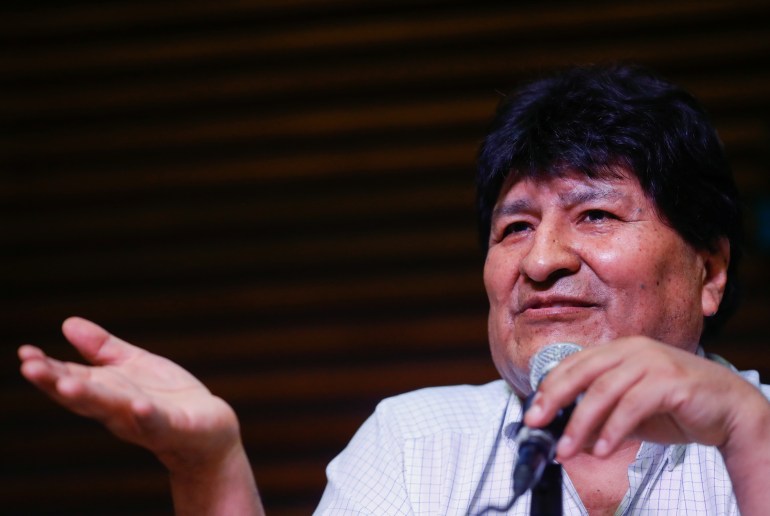 Former Bolivian President Evo Morales speaking at a news conference, a day after Bolivians voted in the presidential election, in Buenos Aires, Argentina [Agustin Marcarian/Reuters]During the news conference in Argentina, Morales said that he intends to return to Bolivia, “sooner or later” and that the charges against him were “part of a dirty war”.

“It’s a matter of time. My great wish is to return to Bolivia,” Morales said, noting that his intention is to settle in his home city of Cochabamba to become a “farmer and small producer”.

The results give MAS majority control in the Senate, as well as in the Chamber of Deputies – ample power to govern and pass legislation.

“We have to recognise the figure of Evo Morales as a very important leader of our recent history, and he will remain so,” Penaranda said, “and although his popularity suffered a bit during his third term in office, he remains strong and is a motor of the MAS, clearly.”

STOCKHOLM (BLOOMBERG) – Swedish confidence in the nation’s strategy to fight the coronavirus pandemic has slumped, with concerns over capacity in the health-care system now…

LONDON (REUTERS) – Britain and the European Union can clinch a Brexit trade deal and the shape of one is clear, but London will not…