World’s fourth-largest island to vote on next head of state amid political crisis, rampant poverty. 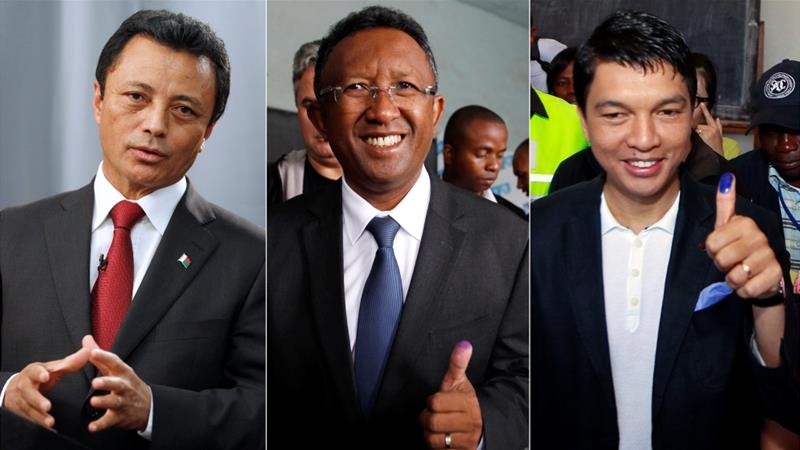 Four former presidents, three former prime ministers, a pastor and even a popular rock singer; when it comes to picking their next head of state, voters in Madagascar are not short of options.

Far from it. Overall, the names of 36 hopefuls will be on display in the A3-sized ballot papers on Wednesday, when nearly 10 million registered voters will take to the polls to determine who will lead the Indian Ocean nation for the next five years.

But the build-up to the high-stakes vote has been marred by controversy over campaign spending and allegations of corruption, as well as protests against proposals to change the country’s electoral laws.

Here’s all you need to know about Wednesday’s presidential election.

Why does the vote matter?

The world’s fourth-largest island and home to about 25 million people, Madagascar has been beset by frequent political upheaval since becoming independent from France in 1960.

A disputed 2001 presidential election led to violent clashes that ended with Marc Ravalomanana, then-mayor of the capital, Antananarivo, taking power.

The outgoing leader was Didier Ratsiraka, a one-time Marxist who had ruled since 1975 and went into exile.

In in 2009, Ravalomanana was toppled in an army-backed coup by Andry Rajoelina, another Antananarivo mayor.

But neither of them was allowed to run in the last elections, in 2013, which were won by Hery Rajaonarimampianina.

Earlier this year, Rajaonarimampianina’s attempt to amend electoral laws sparked months of protests, with political opponents claiming the proposed changes were aimed at barring their candidates from taking part in Wednesday’s poll. 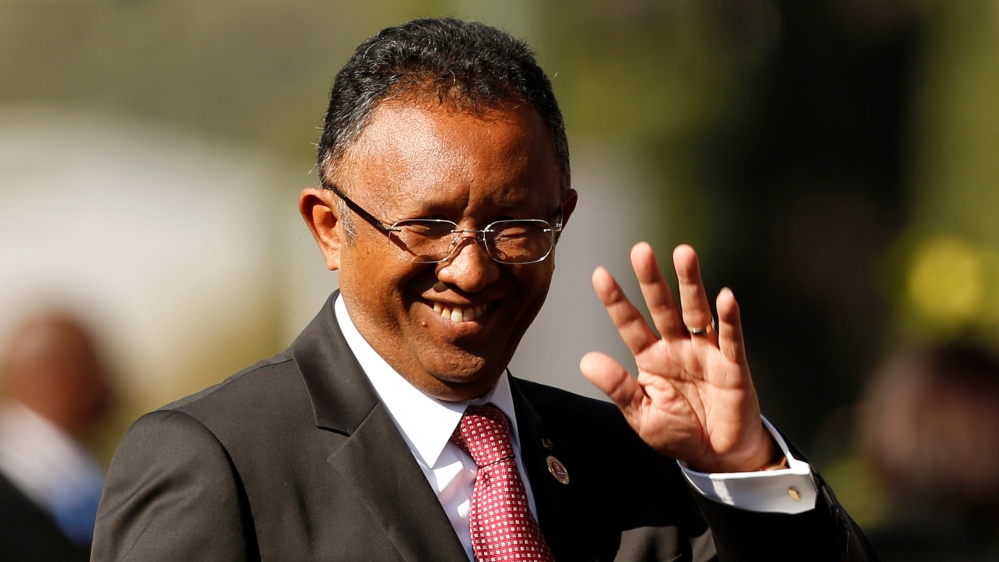 Following the demonstrations, the Constitutional Court ordered the 60-year-old to form a government of national unity with a “consensus prime minister” in order to avert a full-blown crisis.

In Madagascar, presidents operate as the head of state, positioned above the country’s prime minister and its bicameral parliament.

The multitude of candidates hoping to fill the post – only five of which are women –  points to a “weakness of political parties” in the country’s fragile democracy, Rabenarivo said.

Meanwhile, Madagascar’s considerable diversity means none of the candidates can “pretend to represent and aggregate the interests of the majority of voters”, Adrien Ratsimbaharison, an expert on Malagasy politics, told Al Jazeera.

“This high number of candidates is due to the fragmentation of the Malagasy society: there are traditionally about 18 or so ethnic groups, and a marked difference between the lifestyle of coastal people (Cotiers) and those of the centre (of Merina and Betsileo ethnic groups),” said Ratsimbaharison.

“So each candidate is representing some group and some interests, but many of them almost run just to be famous, and some are running so that they can negotiate a ministerial position with the eventual winner,” he added.

Who are the top contenders?

Rajaonarimampianina, Ravalomanana and Rajoelina – all former presidents – are widely seen as the frontrunners among an assortment of political leaders, business figures and celebrities.

The Malagasy government banned publication of the study, citing a threat to “public order”.

It was later obtained by and reported on by AFP, however.

Ranked in pole position by the FES study of voter intentions, Rajoelina has drawn impressive numbers to his pre-election rallies.

Nicknamed the “disc jockey” on account of his past as a party-promoter in Antananarivo, the 44-year-old has proposed to make the eastern port city of Tamatave the “Miami” of Madagascar. He has also vowed to install electronic tracking devices on cattle to curb widespread theft of the animals. 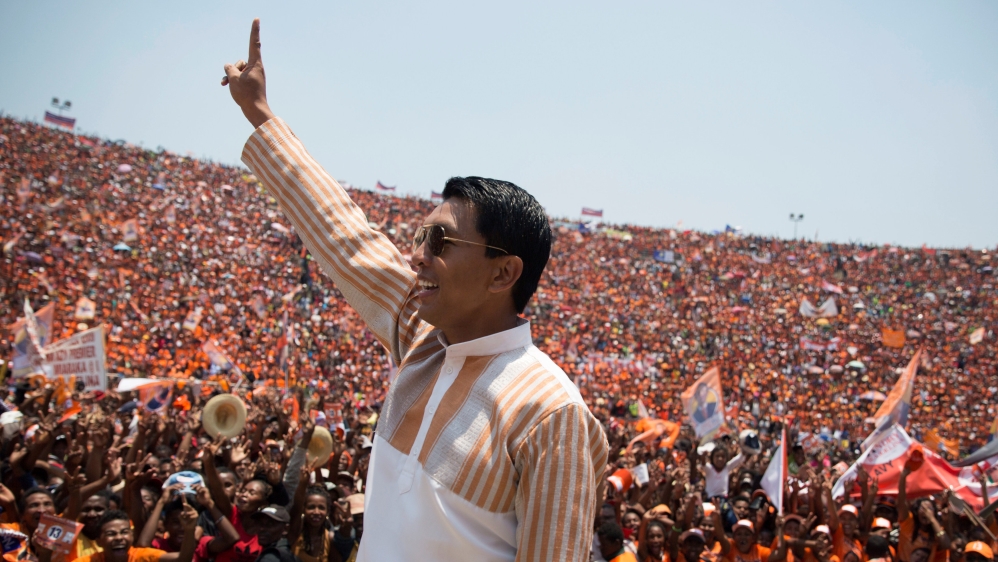 For his part, Ravalomanana, a 68-year-old self-made agro-business mogul, has promised to equip school children with electronic tablets.

Rajoelina and Ravalomanana were both prevented from running during the previous election five years ago – Rajoelina for not filing his candidacy papers before the deadline, an electoral court ruled, while Ravalomanana was prevented from entering the country after fleeing into exile following his 2009 removal from power.

Fellow contender Rajaonarimampianina, a beneficiary of the pair’s ban in 2013, has promised to initiate “a new phase in development” if elected.

In line with article 46 of Madagascar’s constitution, he resigned 60 days prior to this year’s polls, on September 7.

How does voting work?

If none of the three-dozen hopefuls win more than 50 percent of the votes cast, a runoff between the two best performers will be held on December 19.

The winner will serve a five-year term, beginning in January 2019.

According to reports, 9.9 million people are eligible to take part in the elections.

Preliminary results are expected by November 14 and officials have until two weeks past then to declare the final outcome.

Have there been any controversies?

A number of the less-fancied candidates have alleged irregularities in Wednesday’s voters roll and unsuccessfully called for the polls to be delayed.

Campaign spending has also presented a source of controversy.

There are no laws capping the financing of candidates’ bids for office, prompting concerns some contenders have disproportionately large election war chests.

The three frontrunners have crisscrossed the island – which is bigger than Spain, Thailand or Iraq – by helicopter in a bid to reach would-be voters, a strategy not all candidates can afford.

“While most of the other candidates were barely able to campaign in a few big cities, traveling by cars, these three candidates were spending millions [of dollars] to rent helicopters which allow them to cover all of the regions, including the smallest towns,” said Ratsimbaharison, a visiting scholar at the US-based University of South Carolina‘s Walker Institute of International Studies.

This year is not the first time campaign spending has posed an issue in Madagascar, however.

According to FES spokesperson Marcus Schneider, the 2013 election was “one of the most expensive in the history of Madagascar”.

“A study by the European Union, which came out in 2016, claimed the campaign budget of the winner in 2013 [Rajaonarimampianina] was $43m, meaning he spent more per-voter than US President Donald Trump did [in the 2016 US election],” Schneider told Al Jazeera.

What are the key issues?

Many voters see access to basic services such as water and electricity, as well as finding employment, as their basic priorities.

Ratsimbaharison cited public safety, job creation and local and foreign investment to kick-start the economy as the three main issues “for the survival of the country”.

“Nevertheless, most of the voters just want more rice to eat, more public schools and medical facilities,” he noted.

Despite being the leading global producer of vanilla and a major exporter of Sapphire gems to the international market, more than 76 percent of Malagasys live in extreme poverty, according to the World Bank, subsisting on less than $2 a day. 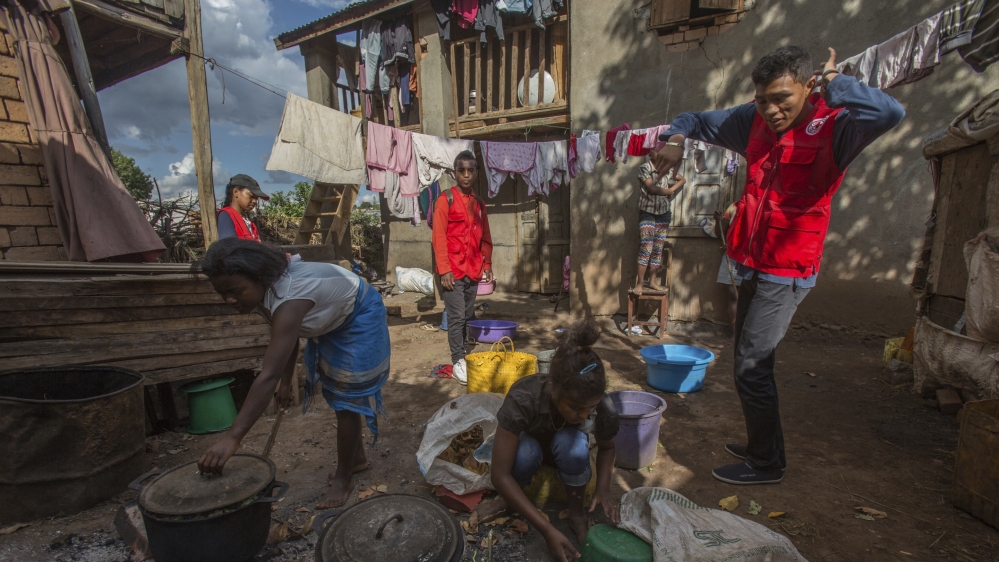 Its agriculture sector, the main source of income for most people, is vulnerable to regular weather-related disasters such as tropical storms, flooding and drought.

Nearly 50 percent of children under the age of five are affected by malnutrition, according to the UN Children’s Fund (UNICEF), making Madagascar the fifth worst affected country in the world.

Meanwhile, fewer than eight percent of the population, about two million people, are active internet users.

“We hope, [the new president] will be able to recover the country and to defeat its most persistent demons: poverty, corruption, impunity, bad governance,” Ketakandriana Rafitoson, director of anti-corruption NGO Transparency International’s Madagascar branch, told The Associated Press news agency.

“Unfortunately, this looks bad because those who are likely to win these elections are the specialists and sources of these vices mentioned above … One after another, they have pushed this country into the abyss in which it is today,” Rafitoson said.

Madagascar was ranked 155th out of 180 nations in Transparency International’s 2017 corruption perceptions index. 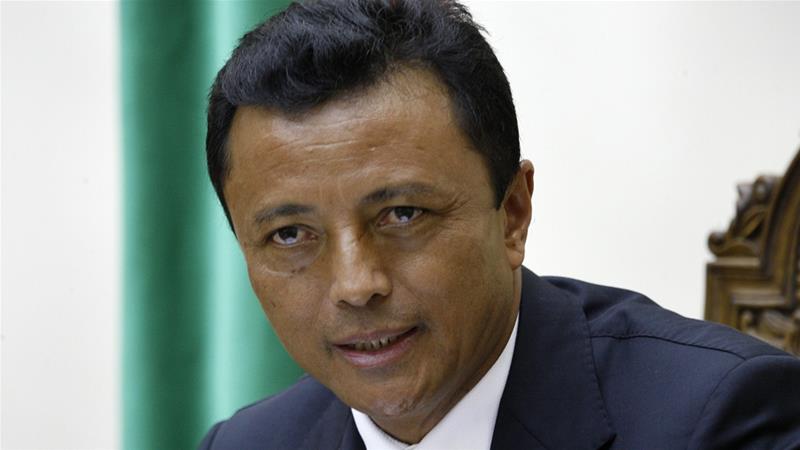 Madagascar: Return of a President