Fury over Meghan and Harry’s ‘shoddy’ treatment of the Queen: Poll shows Britons want royal pair stripped of titles and public money as their popularity plunges

The Queen has been treated ‘shoddily’ by Harry and Meghan and should not ask them to stay in the UK, the public believes.

A Daily Mail poll also suggests there will be deep anger if the couple keep their titles and privileges while effectively quitting as royals and moving to North America.

A majority said Harry, 35, and Meghan, 38, should be evicted from their Windsor cottage and be made to pay back the £2.4million of public money spent on refurbishing it. 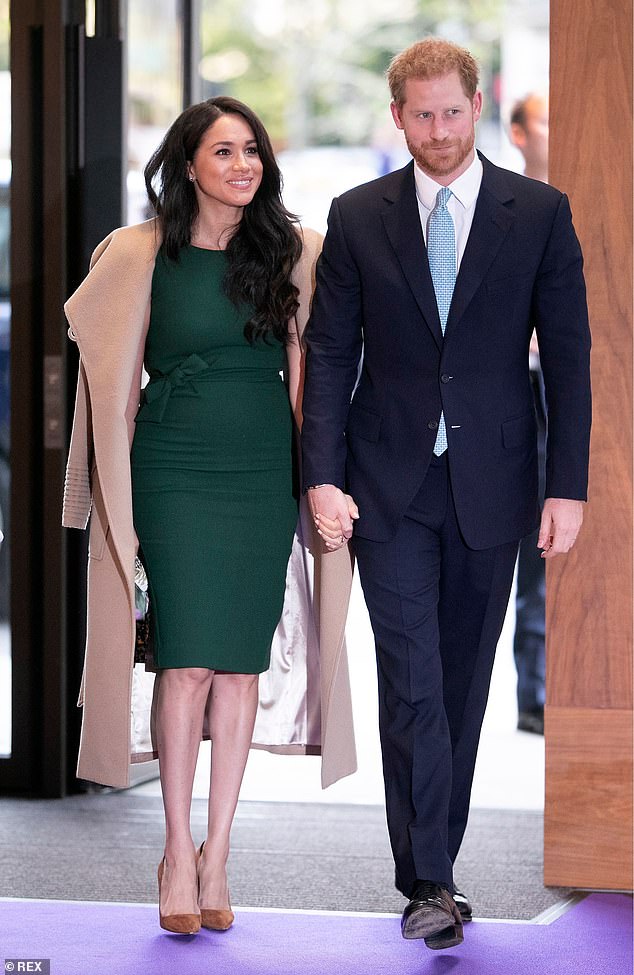 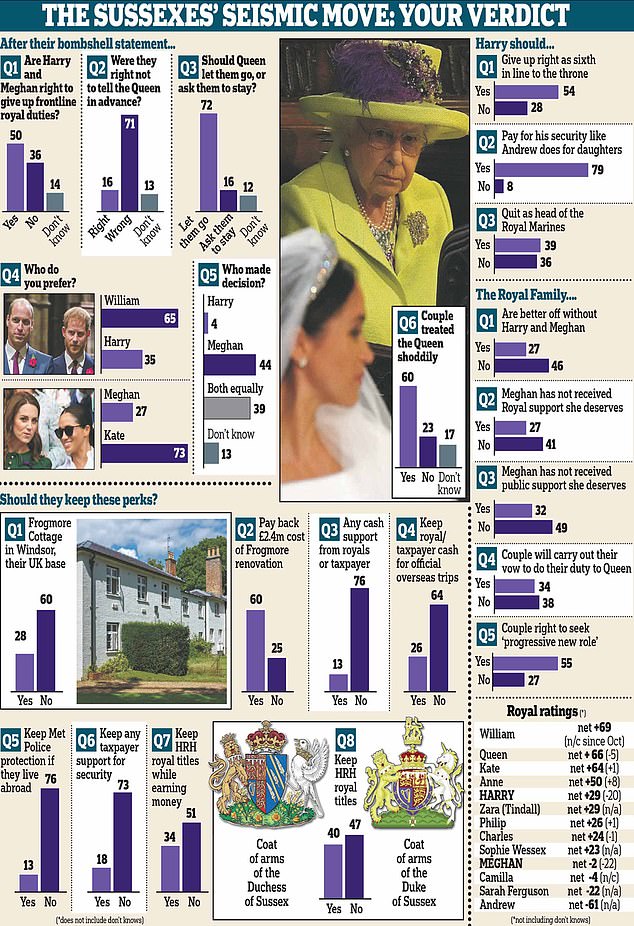 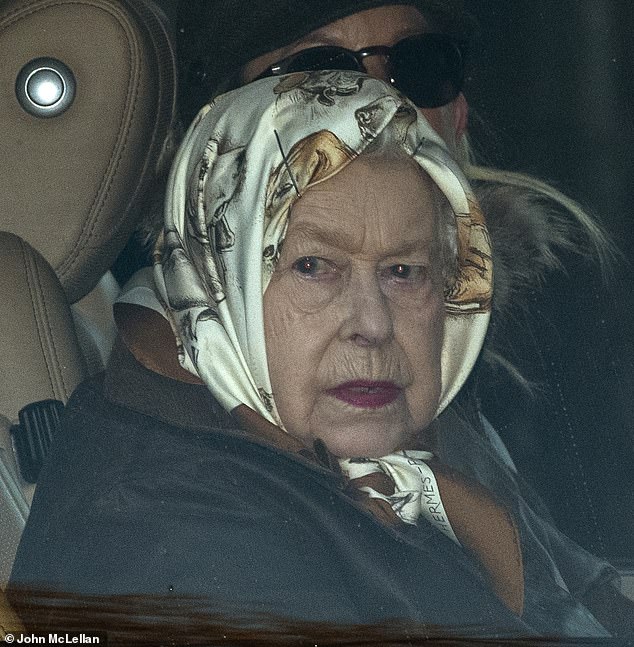 The Queen (pictured driving back to Sandringham today) has been treated ‘shoddily’ by Harry and Meghan and should not ask them to stay in the UK, the public believes

Meghan is blamed for the couple’s bombshell move, with just 4 per cent saying it was Harry. The poll came as:

The poll reveals that both the duke and duchess have paid a heavy price in popularity since making the announcement on Wednesday night.

Meghan’s public rating is now a net minus 2 per cent, down 22 points in three months. She is in a lowly tenth place among the royals, below Sophie Wessex.

Harry, who not long ago was the nation’s most loved prince, has seen his rating slump by 20 points to fifth.

He has been overtaken by his hard-working aunt, Princess Anne.

Asked whether they prefer Harry or William, the public chooses William ahead of his younger brother by 65 to 35.

William has now overtaken the Queen as the nation’s favourite royal.

His wife Kate is further ahead than ever. She trumps Meghan in the popularity stakes by 73 percentage points to 27.

The poll by JL Partners shows that the public has no wish to stop Harry and Meghan making a new life for themselves and Archie away from Britain.

A total of 50 per cent believe they have the right to do so, against 36 per cent who say they do not. And 46 per cent think the Royal Family will not be better off without them. But the public is clear that Harry and Meghan cannot eat their royal cake and have it.

And the Queen’s subjects are appalled at the way her grandson and his American wife have treated her. There is deep sympathy for the 93-year-old monarch at a time when her husband Prince Philip, 98, is frail and recovering from illness. A total of 60 per cent say Harry and Meghan have treated her ‘shoddily’. Only 23 per cent reckon they have not.

Some 72 per cent of people say the Queen should let them go abroad, and just 16 per cent say she should ask them to stay. The survey shows that the public’s attitude to Harry and Los Angeles-born Meghan is not ‘good riddance’. 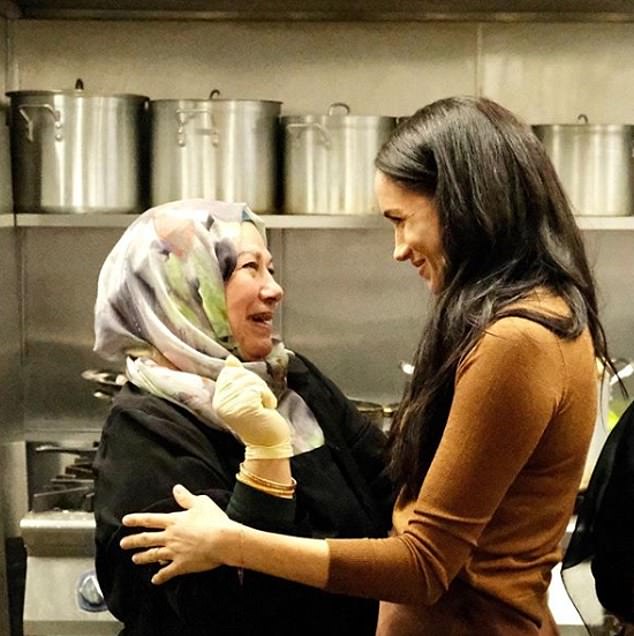 Meghan Markle embracing Ahlam Saeid at the Hubb Community Kitchen in West London on Tuesday, before she and Harry plunged the Royal Family into crisis by announcing they were ‘stepping back’ from their official duties 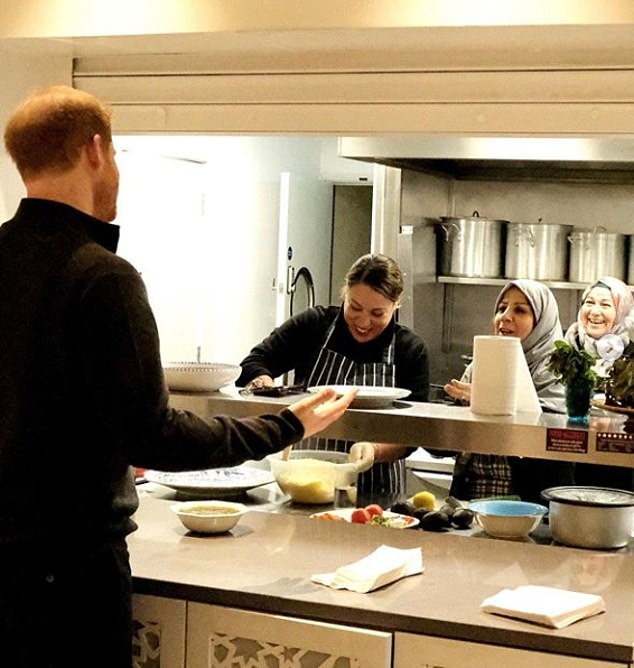 In the first glimpse of what their ‘progressive’ new role could look like, the couple met, embraced and laughed with the women who set up the community kitchen in the wake of the 2017 Grenfell tragedy

Some 60 per cent think the pair should hand over the keys of Frogmore Cottage near Windsor Castle, while 28 per cent say they should keep it.

And 60 per cent believe they should also stump up the £2.4million cost of the controversial refurbishment of the home. Only 25 per cent say they should not have to find the money.

An even bigger proportion, 76 per cent, reckon Harry and Meghan should not get another penny in support from Buckingham Palace or the Government – or Metropolitan Police protection – if they live abroad. Only 13 per cent say they should be able to retain these entitlements.

Sources suggest the couple may be allowed to keep their royal titles. But if the decision was left to public opinion, they would be stripped of them, especially if they are making money from their new ‘independent lives’.

A total of 54 per cent want Harry, who is sixth in line to the throne, to lose the right of accession, while 28 per cent think he should keep it.

And 47 per cent of people say the couple should give up their right to have the HRH initials in front of their names. Some 40 per cent say they have the right to retain them. But these views harden if Harry and Meghan find new sources of income apart from the royals and the taxpayer.

In that event 51 per cent say they should forego their HRH status. One in three – 34 per cent – believe they should hold on to it. 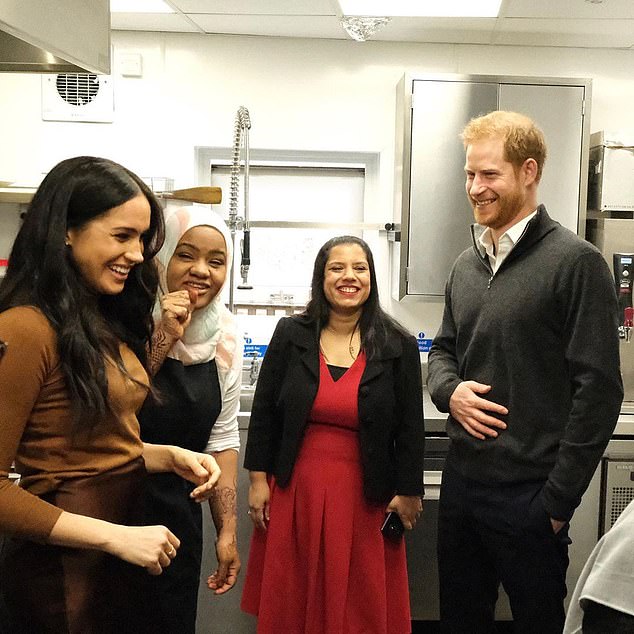 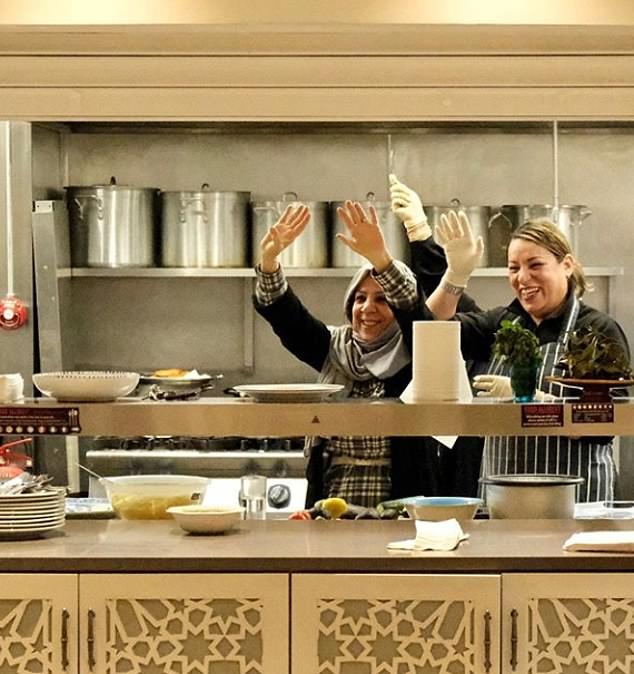 Many of the public also think Afghan war veteran Harry should stand down from one of his most prized roles, as ceremonial head of the Royal Marines. A total of 36 per cent think he should carry on as Captain General, but 39 per cent say he should relinquish the post.

The poll gives a revealing insight into the perception of the balance of power in the marriage.

The couple say their decision was a mutual one. But a total of 44 per cent of people believe Meghan made the decision, 39 per cent say they had an equal say, and just 4 per cent think Harry was in charge. A total of 57 per cent of those aged 18 to 24 have a positive view of the duchess. The figure is only 30 per cent among over-65s.

Despite the Royal Family being rocked by the crisis, the public overall has faith that the monarchy can weather the storm.

A total of 44 per cent say the institution has not been damaged, while 38 per cent believe it has. Nearly one in two people – 48 per cent – say the monarchy will last ‘forever’, while 39 per cent reckon it will be around for up to 50 years, and only 13 per cent expect it to be gone within a decade.

JL Partners interviewed 1,000 adults online on Thursday and yesterday. The earlier poll on royals’ ratings was carried out in October by YouGov.