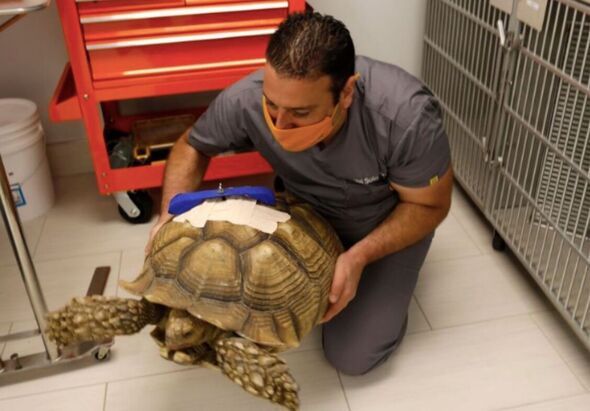 A 42-year-old man will have to undergo court-ordered mental health treatment after attacking a 70-year-old tortoise in California almost two years ago. The creature, named Michelangelo, was found bleeding after being attacked by the intoxicated man, named by The Mercury News as George Robles.

The African sulcate tortoise was being kept as a pet at the Play ‘N’ Learn Preschool in east San Jose, California, USA, when the incident happened.

Mr Robles, 42, was initially arrested in January 2021 and spent much of the past two years in Santa Clara County jail.

According to the Judge, Mr Robles mistook the tortoise for something else while inebriated.

A neighbour first raised the alarm when they spotted George Robles “yelling and throwing things in the playground” and called the authorities.

The school’s owner, investigating the trespass, found the injured tortoise impaled with a six-inch shard of a wooden gatepost lodged in the back of its shell, as well as a rake handle inserted between the tortoise’s head and leg and surrounded by shattered glass from flood light bulbs that had been broken on its back.

Michelangelo was immediately rushed to a veterinarian for emergency treatment.

A resident of the local area, George Robles was initially put on a 72-hour mental health evaluation but was released in order to combat the potential for overcrowding during the Covid-19 pandemic.

Mr Robles would subsequently return to the Preschool, reportedly stealing electronic items and damaging property. During the investigation, another break-in that occurred before the attack on Michelangelo was also attributed to Robles.

Mr Robles escaped further prison time, as the presiding judge deemed it would be better for the community and the individual concerned to attend mental health and substance abuse treatment.

However, Mr Robles was also banned from keeping animals for ten years and prohibited from using drugs or alcohol.

Issuing a stay-away order for the Preschool’s location, judge Hawk told Mr Robles, “You’re not to go near that place, you understand?”

Mr Robles replied that he understood.

Mr Robles was represented by Public Defender Ariel Toran, who told the court, “There is no threat of this reoccurring, this was a very unique circumstance where Mr. Robles was extremely inebriated, and thought the turtle was something else.”