Masked thugs ‘out for blood’ burst into family home and stabbed to death 16-year-old boy wearing only his pants: Man found guilty of murder over tit-for-tat south London gang war

Two young men have been found guilty of killing a boy who was stabbed to death in his own home by masked invaders ‘out for blood’.

Camron Smith, 16, was unarmed and in his underwear when attackers stormed into his home armed with knives, the Old Bailey was told.

His killing came amid a crime wave on the streets of Croydon, south London, overnight on June 30 and July 1 last year, jurors were told.

Prosecutor Duncan Atkinson QC said a group of attackers had set out on a moped and in a car they had hijacked to track down those they had linked to the stabbing of an associate.

He said they acted as a group, entering three homes in rapid succession.

The first was no longer occupied by anyone they were looking for and was, instead, home to a woman who awoke to find a masked male in her bedroom, the court heard. 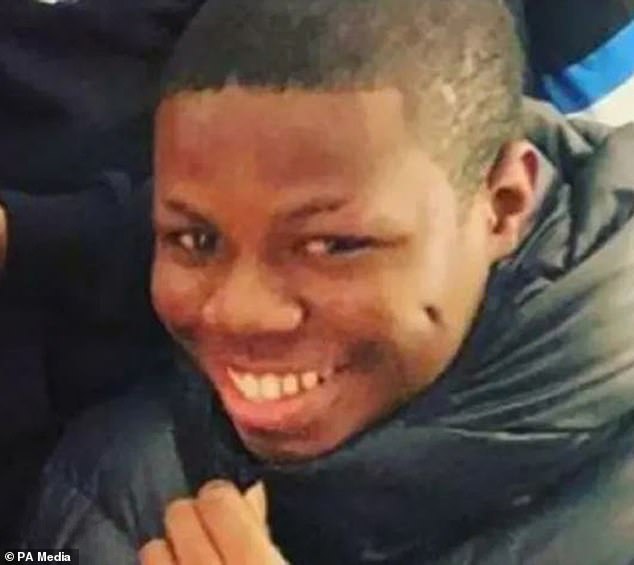 Camron Smith, 16, who was fatally stabbed in his own home while only wearing his underwear in Bracken Avenue in Shrublands, Croydon

At the second property, the occupant was able to keep the group outside, the prosecutor said.

Mr Atkinson said: ‘The occupant of the third address was not so fortunate.

‘The home of 16-year-old Camron Smith was entered by a masked, gloved and knife-carrying group and there they brutally killed that young man.

‘Unarmed and in his underwear, Camron Smith was stabbed in his mother’s bedroom as he sought to evade the group that had entered his address, out for blood and determined to cause, at least, really serious bodily harm.’

A jury at the Old Bailey deliberated for 31 hours to find Romain LaPierre, 20, of no fixed abode, guilty of Camron’s murder as well as robbery relating to the car used in the attack.

Jordan Tcheuko, 19, from Wembley, was cleared of murder but found guilty of manslaughter.

Sako Amoniba-Burnley, 21, from Norbury, and a 16-year-old youth, were found guilty of robbery.

A fifth defendant, Allison Scott, 55, from Crodyon, was acquitted of assisting an offender.

Sentencing was adjourned until December 2.