Thirty others imprisoned for the murder of young student wrongfully accused of committing blasphemy last year. 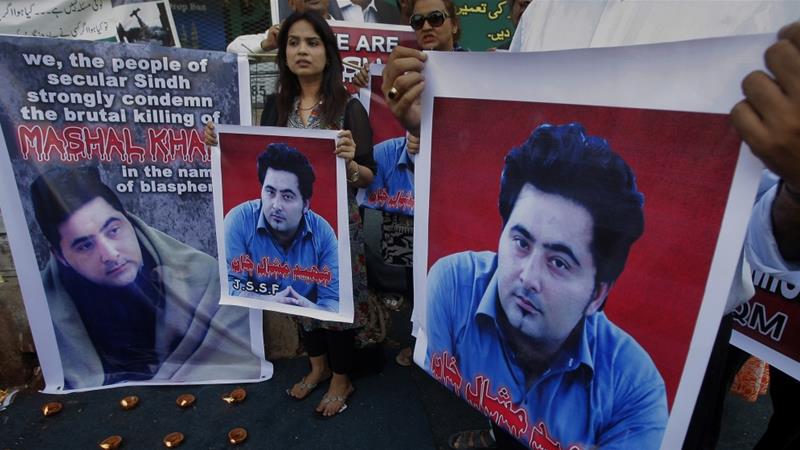 Islamabad, Pakistan – A Pakistani court has sentenced one man to death and handed prison terms to 30 others over the mob lynching of a university student who was wrongfully accused of blasphemy last year.

The killing of 23-year-old Mashal Khan, which was filmed and posted to social media, ignited national outrage in Pakistan, where blasphemy cases have increasingly sparked violence in recent years.

An anti-terrorism court in Haripur on Wednesday announced verdicts for 57 of the 61 suspects who had been charged in connection with the case.

Judge Fazal-e-Subhan sentenced one of the accused to death; five to life in prison; and another 25 to at least three years imprisonment, according to a copy of the verdict. Twenty-six suspects were acquitted.

One recently arrested suspect is yet to face trial, while three more are on the run.

Khan’s family said that it would review the verdict before announcing whether they would be pursuing their option of an appeal.

“Our legal team is meeting on this, and as soon as we reach a decision, we will announce it,” Aimal Khan, Mashal’s brother, told reporters after the verdict was announced.

“Our demand was that all of the suspects should have been convicted … We ask the [provincial] police to arrest the remaining suspects who are still at large and to bring them to trial.”

Khan was an undergraduate student at the Abdul Wali Khan University in the northern town of Mardan, about 122km west of the capital, Islamabad.

In April 2017, he was accused of committing blasphemy – a charge that carries a judicial death sentence and, increasingly, the threat of extrajudicial murder in Pakistan – by fellow students.

Days later, a mob of hundreds attacked him at the university hostel.

Khan was stripped of his clothes, beaten and shot by members of the mob, video footage of the lynching showed. He died of his injuries.

In June, a police inquiry into the allegations against Khan found him innocent of having committed blasphemy.

Blasphemy is a sensitive subject in Pakistan, where around 40 people are on death row or serving life sentences for the crime, according to the United States Commission of International Religious Freedom.

At least 74 people have been killed over alleged blasphemy in Pakistan since 1990, according to an Al Jazeera tally.

Those killed include people accused of blasphemy, their relatives, their lawyers, judges hearing their cases and members of their communities.

On Wednesday, more than 250 police officers were deployed to maintain security around the anti-terrorism court, where the verdict was read behind closed doors.

Khan’s family has been given a security detail by the government since the case gained national prominence.

Asad Hashim is Al Jazeera’s Web Correspondent in Pakistan. He tweets at @AsadHashim.