A man who allegedly sexually assaulted a 14-year-old girl while she was swimming at Brighton pier is being sought by police. 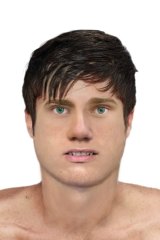 Police have released this composite digital image of a man they wish to speak to in relation to the alleged sexual assault. Credit:Victoria Police

The teen was swimming with friends at the Middle Brighton Pier on January 13 when the alleged incident occurred about 4.40pm.

Police said in a statement that the girl was swimming back to a ladder on the pier when the man grabbed her while in the water and sexually assaulted her.

He was last seen swimming away from the area.

A composite image of a man police believe could assist with their inquires has been released by detectives from the Bayside Sexual Offences and Child Abuse Investigation Team.

They say he is perceived to be in his 20s, with short dark hair, blue or green eyes and a solid build.

Anyone who recognises the man, or has information that could assist police with their enquiries is urged to contact Crime Stoppers on 1800 333 000 or submit a confidential crime report at www.crimestoppersvic.com.au