A man who entered an inner-city primary school armed with an knife and homemade knuckle dusters has faced court.

Sin Ho Kao allegedly entered Richmond West Primary School on Wednesday afternoon about 2.30pm with multiple controlled weapons inside a satchel, a flip knife in his back pocket and a fork fashioned into a knuckle duster, police said. 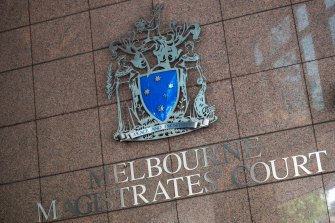 The 42-year-old approached a ground-level office door on the east side of the primary school campus and tried to enter. A teacher told him the door was locked and that he should check in at reception.

Mr Kao then began walking around school grounds and was approached by a second teacher, who asked him to leave and escorted him to the front gate. Mr Kao refused and returned to the school grounds, prompting the teacher to call the police, according to court documents.

Mr Kao has been charged with trespassing, resisting police, possession of a controlled weapon and being drunk in a public place. After he was taken to Richmond police station, Mr Kao was assessed by a forensic medical officer and deemed not fit for interview.

On Thursday a man’s body was found just outside the school near the safe-injecting room. Police confirmed the man’s body, which is yet to be identified, was discovered shortly before 7am near the entrance of the school.