WITH cases of coronavirus rising across England, the Government is poised to announce new three-tier lockdown rules later today.

The map below shows how your area ranks in terms of coronavirus infections. 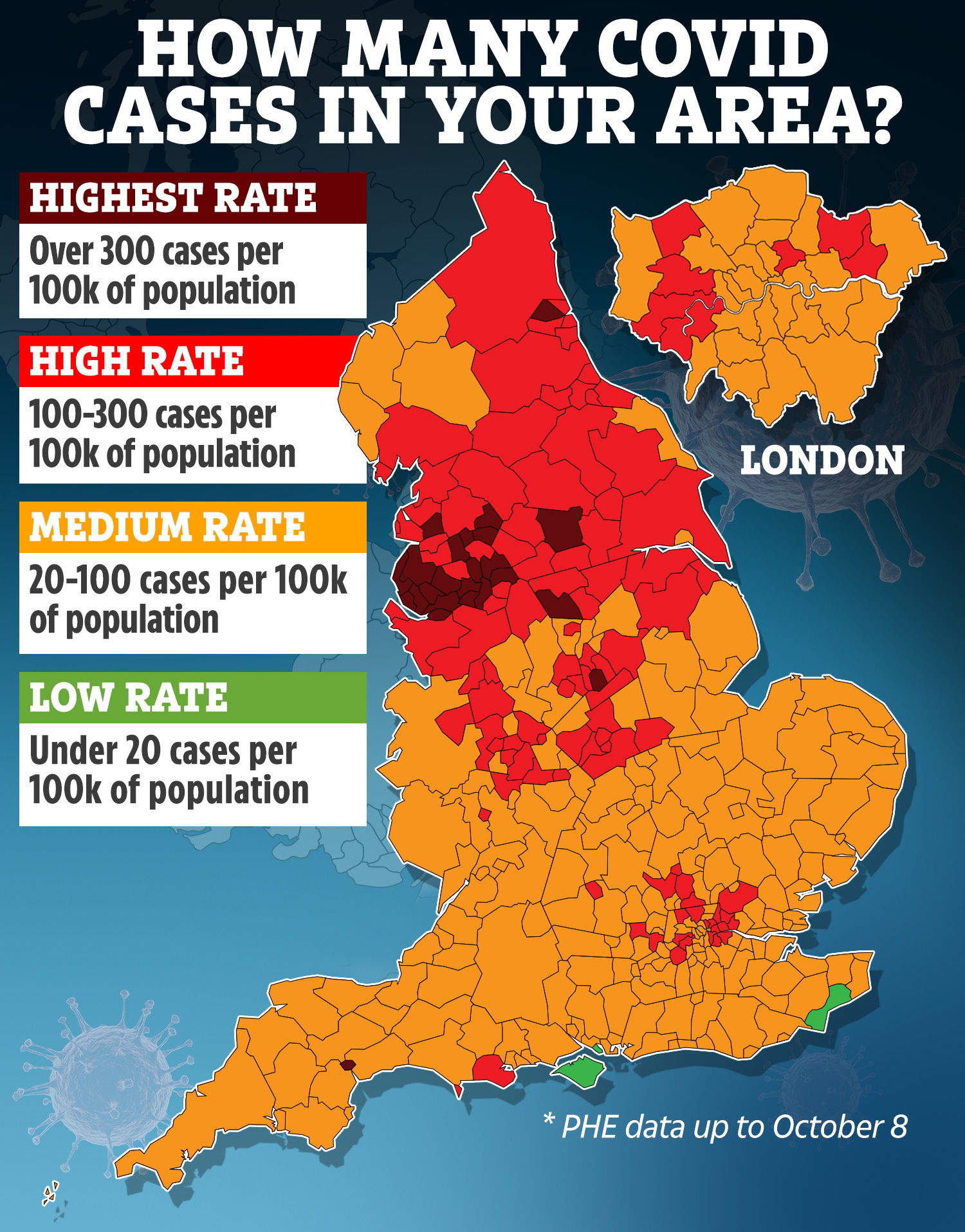 Areas of the country that have the highest rates of infection are seen shaded in dark red – this includes areas of the North West.

This includes places like Manchester, where the most recent data suggests that the area currently has 477 cases per 100,000 of the population.

The map above shows that there is clear divide between the North and South of the country, with the majority of the North being in the red.

'Not just the North'

The government is yet to reveal the thresholds for its proposed three-tier lockdown measures, and while the map shows a clear divide experts have warned that the virus is climbing everywhere, and that it's not just a problem in the North of the country.

Deputy chief medical office Prof Jonathan Van Tam today said the epidemic has picked up in the North but that all areas are seeing a growth in infection rates.

Those living in the dark red will likely be hit with the toughest restrictions.

Under proposed government plans, these would likely be Tier Three households and people living in these areas will not be allowed to mix either indoors or outdoors.

Pubs and bars will also close in those areas, but it is understood restaurants will continue serving food until 10pm following a major backlash from regional leaders.

The restrictions are likely to hit Liverpool, Manchester and parts of Yorkshire from as early as today. They will be reviewed monthly.

In the seven days to October 8, the areas reported nearly 4,000 new cases.

The North West had 180 hospital admissions for Covid-19 on Friday and, as of Sunday had a total of 1,218 patients in hospital.

Tier One — medium risk — will see current social distancing measures, the “rule of six” and a pub curfew of 10pm enforced.

Areas in Tier Two will have the same restrictions plus a ban on households mixing.

Only two households will be able to mix, and then only in gardens. In Tier Three “very high” risk areas overnight stays will be outlawed for residents and visitors.

Pubs and bars will be required to close and no household mixing will be allowed for socialising either indoors or outdoors.

Tier Three gyms and leisure facilities are expected to close. But, after a furious backlash, restaurants are likely to be able to serve until 10pm but without booze.

The Prime Minister will lay down new rules in a bid to curtail the rising number of coronavirus infections in parts of the country this afternoon.

The proposed plan is designed to simplify coronavirus lockdowns across the UK.

Local authorities are expected to get more power over Test and Trace set ups, with the autonomy to use their own local knowledge and teams.

Communities Secretary Robert Jenrick told Sky News' Sophy Ridge on Sunday: "We are trying to work very closely with mayors, with council leaders, with chief executives to design these measures with them. That does take time.

"We want to have good communication between national and local government before we announce how we are going to take this forwards.

"People who know their local authorities are bound to be better than Whitehall national contact centres."

It was this morning revealed that Nightingale hospitals in the North of England have been put on standby.

A Downing Street spokesperson said: "Our primary focus has always been to protect lives and livelihoods while controlling the spread of the virus and these measures will help achieve that aim.

"We must do everything we can to protect the NHS and make sure it can continue to deliver the essential services that so many people rely on.

"This is a critical juncture and it is absolutely vital that everyone follows the clear guidance we have set out to help contain the virus."