May ‘on the brink of naming exit date’: PM could announce TOMORROW that she’ll quit in weeks if Tory MPs agree to back her Brexit deal

Theresa May could be prepared to make clear that she will quit No10 within weeks if Tory MPs agree to back her Brexit deal, ministers believe.

Senior Eurosceptic Conservatives are demanding that she names a date for her departure when she appears before the 1922 Committee of backbenchers at 5pm today.

Last night one close ally of the PM told the Mail that they believed she could now agree to leave Downing Street ‘if it were in the national interest and she finally got this thing through’.

However, the ally warned it would be her ‘last move’ and she would only agree to go if it was clear the deal would pass.

Ten Brexiteers, including European Research Group chairman Jacob Rees-Mogg, have now said they could back the deal if it comes back to the Commons regardless of Mrs May’s intentions.

They fear that moves by former Tory minister Sir Oliver Letwin and Labour’s Hilary Benn – who have organised a series of indicative votes in the Commons today – will result in a much softer Brexit, a long delay to leaving the EU or no Brexit at all.

But a larger group are holding out until an announcement from the PM of a firm date when she will go.

Behind the scenes, former Tory leader Iain Duncan Smith was yesterday said to be ‘actively encouraging’ Brexiteer MPs to back the deal on the basis of a discreet promise by Mrs May to go if it passes. 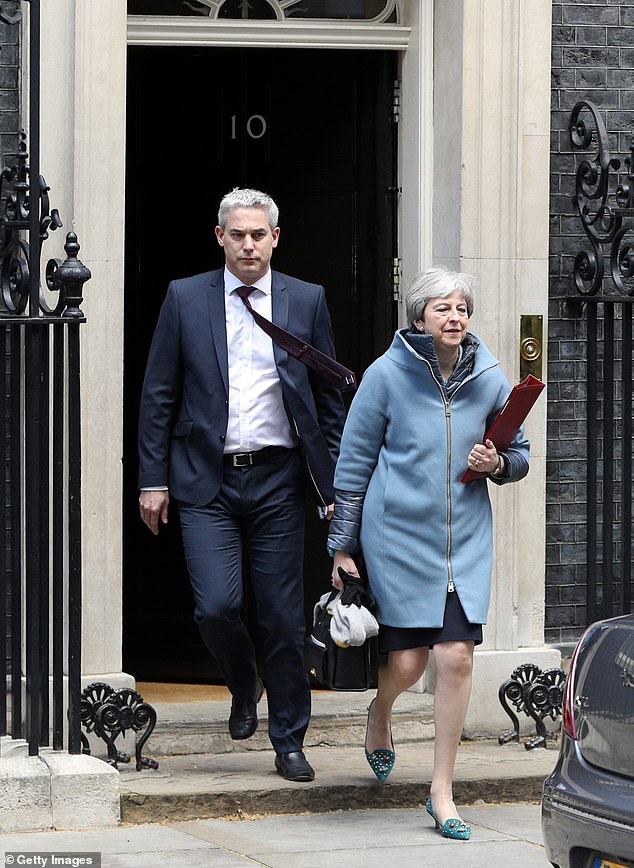 He is thought to have proposed the idea at last weekend’s Chequers summit and told the PM he could deliver 90 per cent of the ERG’s hardline Leavers if she agreed to quit. Mrs May did not rule out the idea but responded sceptically: ‘I’m not sure you can get me the numbers.’

Other senior Eurosceptics want the PM to go public with her promise tonight. It comes amid signs Mrs May could call a third Brexit vote as early as tomorrow if she believes she can get enough support for the Withdrawal Agreement.

Tory Nigel Evans, executive secretary of the 1922 Committee, told the BBC last night: ‘The Prime Minister will be addressing the 1922 tomorrow at 5pm. I am encouraging her in that speech to give the timetable for her departure.

‘A number of Brexiteers are reluctant to support her deal because they think if it gets over the line, she will then say “Look what I’ve achieved – I’m staying”. A number of them want to make absolutely certain she’s nowhere near the negotiating table when we start talking about the future trade relationship with the EU.

‘If the Prime Minister announces a timetable of departure, I think that’s going to swing a lot of people behind her deal – we could get it over the line.’

Dover Tory MP Charlie Elphicke told Kent Online: ‘If the deal does get endorsed, it should be on condition Theresa May agrees to stand down.

What I am clear on is that if we are going to support it, there needs to be a change of negotiating team. I think we need to have a change of leadership and a new face and a new team to take us forward to the future relationship.’

Former education minister Tim Loughton said it was ‘inevitable’ Mrs May would go but she could leave with her ‘head held high’ if she got her deal through.

Cabinet ministers were in talks with the Democratic Unionist Party in Whitehall last night in a last-ditch attempt to win its support – which is seen as necessary before Eurosceptics will fall in line.

A total of 75 Tories – including half a dozen arch-Remainers – voted against the deal when it was defeated two weeks ago by a majority of 149.

At yesterday’s Cabinet meeting ministers, including Commons leader Andrea Leadsom and Treasury chief secretary Liz Truss, pledged their determination and ‘resolve to get this done’.

A source said: ‘They are pulling out all the stops to try and get colleagues over the line.’

But one Cabinet minister estimated the odds of Mrs May getting the deal through at just 30 per cent. Her allies downplayed expectations, saying ‘everything has to fall in place at once’ and it wouldn’t be clear until lunchtime today what would happen.

Even if she wins over the DUP and most of her backbenchers, Mrs May will still need Labour MPs to back the deal. A group of up to 25 hardline ERG members are seen as ‘irreconcilable’ – including Sir Bill Cash, Sir John Redwood and former Cabinet minister Owen Paterson.

Some of these argue that they can still secure a No Deal Brexit regardless of a bid by Sir Oliver to try to find a softer deal the Commons can agree to.

Other Eurosceptic MPs said they were determined to oppose the deal. Dr Julian Lewis, chairman of the Defence Committee, told the Mail: ‘The choice revealing itself is one between a clean Brexit or tearing up the result of the referendum.

‘It is vital that those of us who believe in Brexit neither “flag nor fail” in Churchill’s immortal phrase, at this decisive stage.’

The Easter recess of parliament may be cancelled as MPs try to get a grip of Brexit, Mrs Leadsom said yesterday.

She stressed Britons would expect MPs to be ‘working flat-out’. She told the Commons: ‘I have announced the dates for Easter recess. But, as is always the case, recess dates are announced subject to the progress of business.

‘We will need time in the House either to find a way forward or to pass the Withdrawal Agreement bill, and I think the country will rightly expect Parliament to be working flat-out in either scenario.’ The recess is due to run from April 4 to 23.