The black Democrat mayors for Washington, DC, and Atlanta, Georgia, have both pleaded for an end to violent demonstrations as the shocking extent of the damage to cities across America is laid bare.

Mayors pleaded on Sunday that protesters don’t ‘destroy our cities’ as rioters took to the streets in cities across America in the wake of the killing of George Floyd.

Washington D.C. Mayor Muriel Bowser and Atlanta Mayor Keisha Lance Bottoms, both Democratic black women, said while they support Americans’ right to protest, they wish it was not at the expense of the safety of their community.

‘We’re sending a very clear message to people that they have a right to exercise their First Amendment rights, but not to destroy our city,’ Bowser told NBC’s Chuck Todd in a joint interview with Lance Bottoms on Sunday morning.

‘So we saw a level of just destruction and mayhem among some that was maddening,’ she continued. ‘Our crews are out right now cleaning up our city, and we are working with all of our law enforcement partners to ensure calm in our city.’

Bowser’s comments came as rioters took to the streets in D.C. over the weekend, clashing with law enforcement all over the city – and even in front of the White House.

Lance Bottoms told Meet the Press that 157 people were arrested in Atlanta.

She admitted that ‘there are no easy answers’ to how to respond to Floyd’s death or race relations between black people and cops, but agreed with Boswer in asserting that ‘the solution is not to destroy our cities.’ 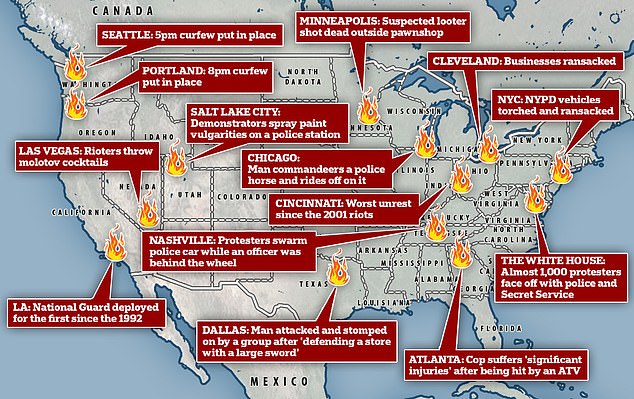 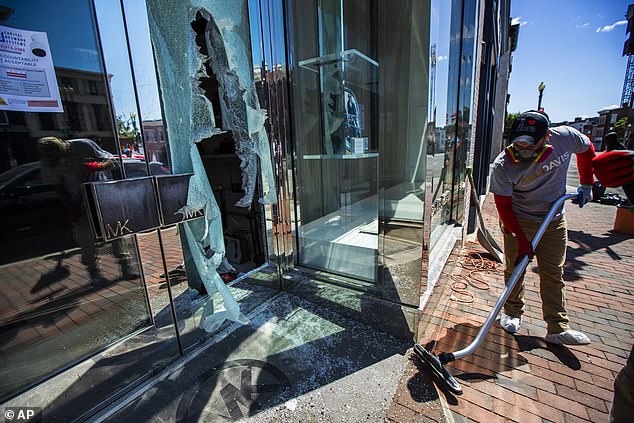 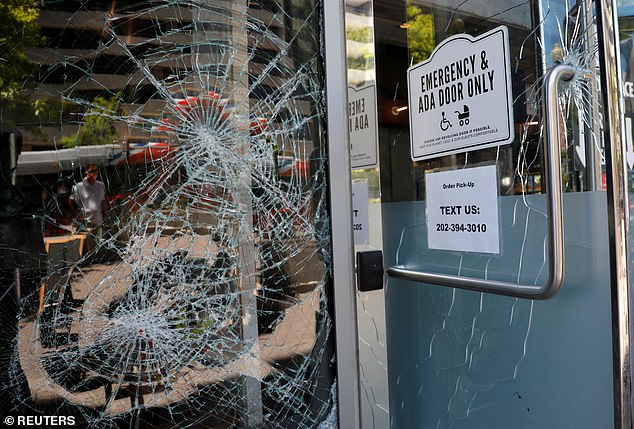 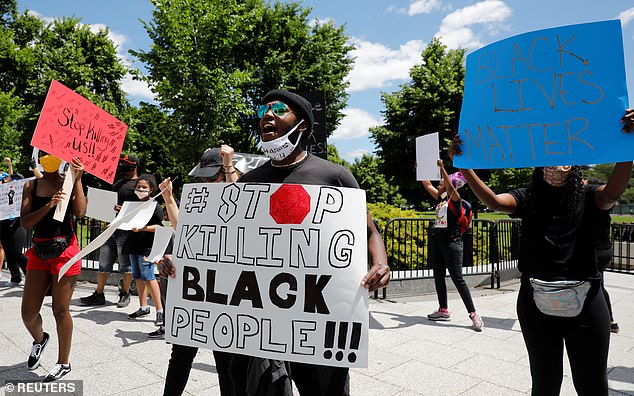 Protests have escalated across the country all week after video emerged of George Floyd, a black man, being killed during an arrest in Minneapolis, Minnesota.

The cellphone video footage showed that Floyd was handcuffed as four police officers pinned him down.

Derek Chauvin, a 44-year-old white cop who has since been arrested, is seen kneeling on Floyd’s neck for eight minutes as the victim repeatedly said he could not breathe.

Chauvin was taken into custody on Friday after protesters called for him to be arrested – and he was charged with third-degree murder.

Floyd’s family, as well as protesters, are calling for the three other officers involved in the arrest – J Alexander Kueng, Thomas Lane and Tou Thao – to be charged, too.

In Washington, D.C., the National Guard was activated over the weekend as almost 1,000 protesters surrounded the White House Saturday night as they squared off with Secet Service, D.C. police and United States Park Police.

Law enforcement struck protesters with batons and sprayed pepper spray into the crowds as demonstrators responded by hurling fireworks and bottles at the officers.

Clashes broke out between the crowds and Secret Service agents as they surrounded the president’s residence on Saturday and at least three Secret Service vehicles were seen with their windows smashed and profanities scrawled on the side of them in graffiti. 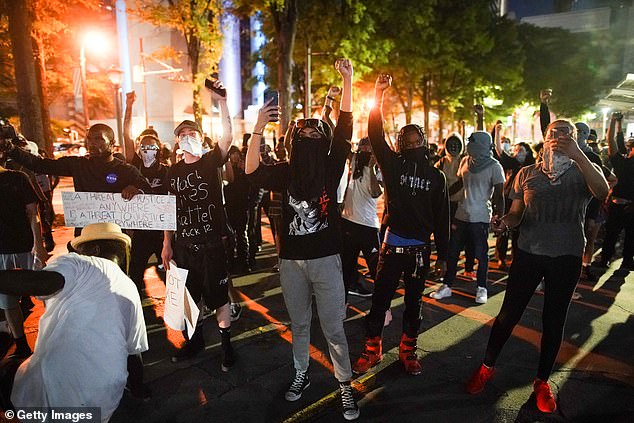 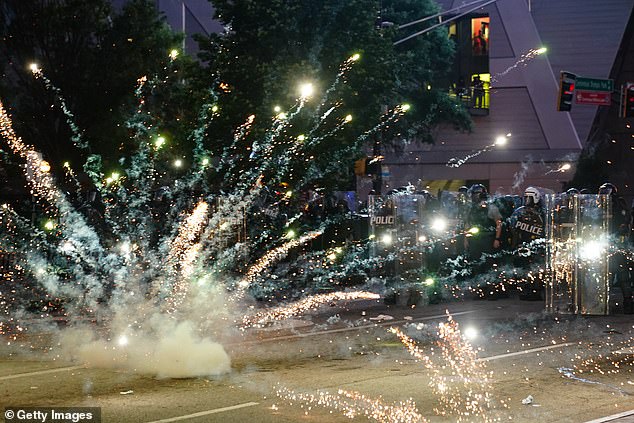 Washington D.C. and Atlanta are two of the cities affected by the days-long protests

The White House went on emergency lockdown, as the president was inside during the protests, and a demonstrator tried to scale the fence in Lafayette Park to get inside.

The man was manhandled by Secret Service, removed from the park and taken into custody at the Treasury Annex.

Atlanta also had its fair share of rioters descend on the city in the last few days, but Lance Bottoms said that while the scene in the city was ‘a bit more calm last night’ than previous days, it ‘wasn’t perfect.’

‘People were still out protesting by and large peacefully. We had a curfew last night, a 9 o’clock curfew. We ended up arresting around 157 people last night,’ she said. ‘So, we know the frustration is still there and all of the issues and all of the concerns and anger that were there on Friday haven’t gone away.’ 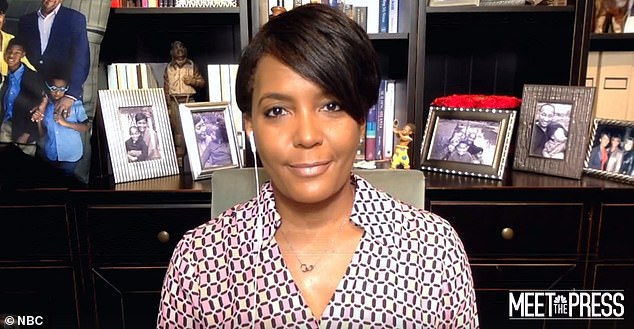 She also admitted that a lot of those who showed up to protest, riot and demonstrate were not from the Atlanta area.

As part of the chaos in Atlanta Saturday, a cop suffered ‘significant injuries’ after they were hit by someone driving an ATV during protests – the driver was taken into custody.

Around 3,000 National Guardsmen and women were activated in Georgia after the Republican governor, Brian Kemp, signed an executive order Saturday night.

Friday was even more chaotic in Atlanta, when demonstrators stormed and destroyed the CNN headquarters and fired a smoke bomb at cops trying to form a barrier to keep them out.

We will use your email address only for sending you newsletters. Please see our Privacy Notice for details of your data protection rights. It means…

We will use your email address only for sending you newsletters. Please see our Privacy Notice for details of your data protection rights. Karen from…

We will use your email address only for sending you newsletters. Please see our Privacy Notice for details of your data protection rights. Michael Gove…