‘How do you get it wrong TWICE?’: Furious customer has a meltdown at McDonald’s staff after they serve him meat instead of veggie burgers for a second time

A vegetarian customer was filmed throwing an epic meltdown after he was served meat in McDonald’s – twice.

Shocked diners watched as the father confronted staff who made the mistakes with his order.

The man, who has not been named but was with a woman and child, flew into a rage after ordering veggie burgers at the drive-thru restaurant in Aylesford, Kent.

When staff got his order wrong a second time, the furious customer approached the food counter and demanded to speak to head office. 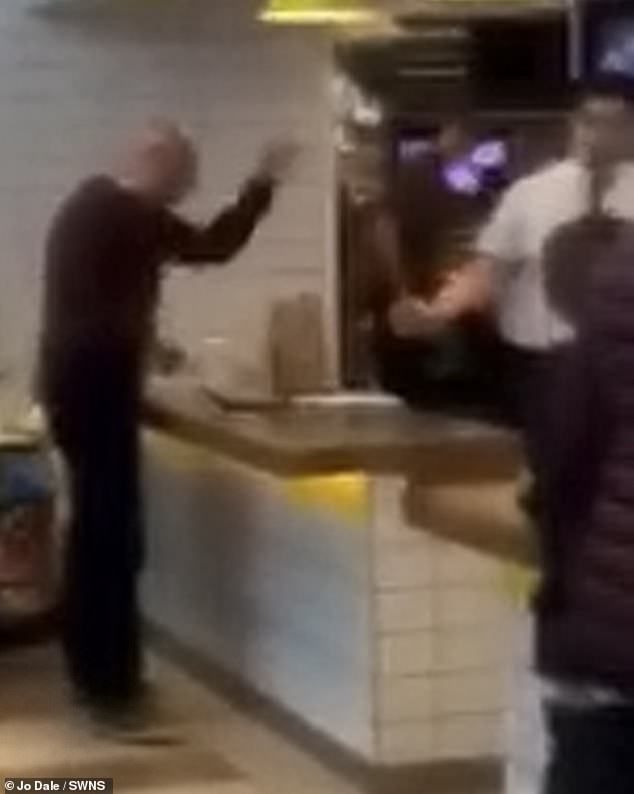 The unidentified vegetarian customer shouts at staff at a McDonald’s drive-thru in Aylesford, Kent, after they got his veggie burger order wrong twice

He said: ‘Call the police – you honestly call the police, friends. Second time around, you give me a non-veg meal – who do you think you guys are?

‘How can you do it for a second time around? Who do you think you guys are?’

When another McDonald’s staff member intervened and asked him to be reasonable, the customer repeated it was the ‘second time around’ his order was wrong.

He added: ‘I will not calm down. Everyone is going to listen to the kind of service you guys provide.

Police officers, who had popped into the restaurant, helped defuse the situation and the man and his family eventually left on empty stomachs on Thursday afternoon.

Customer Jo Dale, who captured the footage on her phone, felt sympathy for the man. 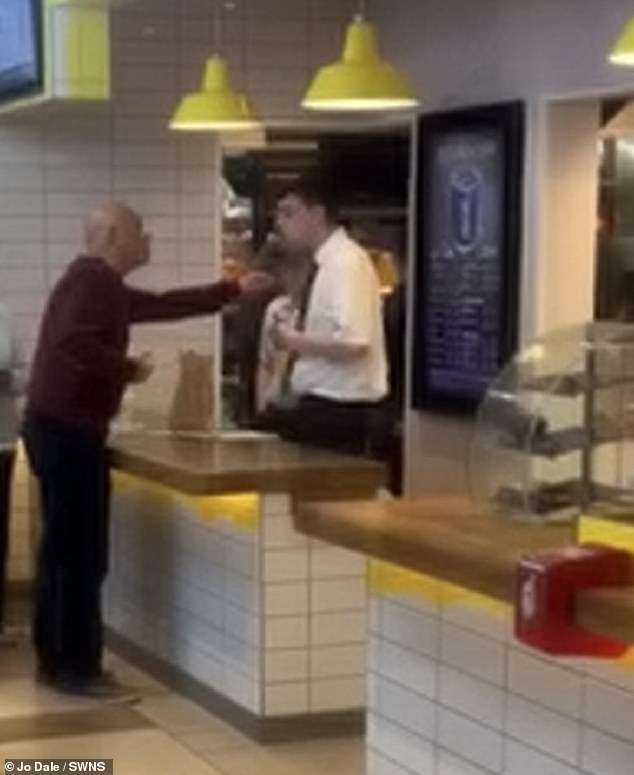 Ms Dale, who owns the Hair Lounge in nearby Halling, Kent, said: ‘He had been through the drive-thru twice.

‘Him and his wife are both vegetarians and they had ordered veggie burgers and he had been given meat twice. To be fair, they get people’s orders wrong all the time.

‘He had taken his wife and young child. I didn’t film the worse of it when he first walked in.

‘He was throwing his McDonald’s bag at them saying he wants to speak to head office and the manager. Another guy got involved and tried to calm him down.’

She was one of more than 30 customers who watched in astonishment as the argument with several members of staff boiled over.

The man could be heard saying: ‘Who do you guys think you are? How do you get it wrong twice?’

Ms Dale added: ‘The police then turned up to get some food themselves. They said they might need the video from me, but in the end they didn’t.

‘The man complaining ended up leaving with no food. Altogether he must have been there around an hour.

‘When I posted the video I didn’t want it to be about him kicking off. The service in there is really bad and this is an example of what it brings people to do.

‘They have got my order wrong before as well, but I didn’t notice until I drove off and I didn’t do anything about it.

‘There were 30 to 40 people sitting downstairs and it was very loud. It all went quiet and it was so awkward.’

McDonald’s has been contacted for a statement.