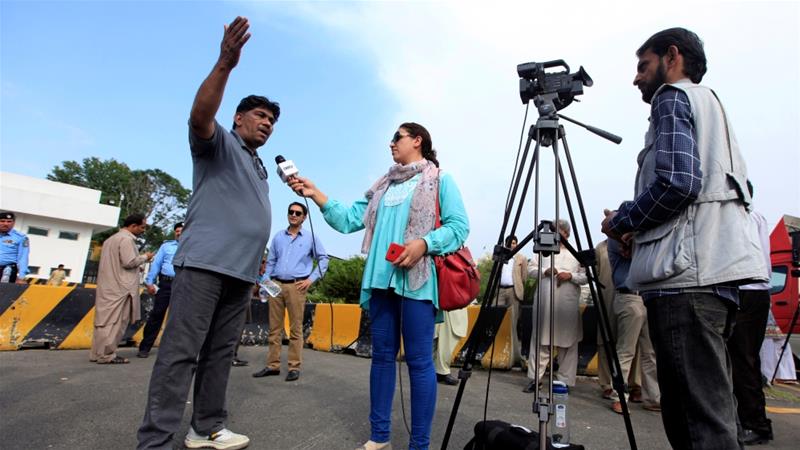 “This is an absolutely unacceptable violation of the principles of media pluralism and independence during a revelation that was clearly in the Pakistani public interest,” said Daniel Bastard, head of Reporters Without Borders’ Asia-Pacific desk, in a statement on Tuesday.

“We call on Prime Minister Imran Khan’s civilian government to take immediate steps to ensure that cable transmission of the three TV channels is restored. The recent surge in sudden acts of media censorship is exposing the current regime’s increasingly dictatorial nature.”

News television channels Channel 24, Abbtak News, and Capital TV were taken off air across the country on Monday, the Pakistan Broadcaster’s Association said in a statement after airing a live press conference by opposition leader Maryam Nawaz.

Nawaz – daughter of three-time former Prime Minister Nawaz Sharif – assailed the government in the briefing, sharing a video she claimed provided evidence that the judge who convicted her father on corruption charges a year ago was “blackmailed”.

The judge has since denied the claim. Pakistan’s media regulator issued notices to TV news channels for airing the press conference live.

Over the last year, journalists and rights groups have told Al Jazeera authorities repeatedly disrupted distribution networks for print and television news services over coverage deemed unfavourable to the ruling party or the country’s powerful military.

On Tuesday, Pakistan’s cabinet ordered the media regulator not to allow press conferences by politicians who had either been convicted or were on trial.

“We have a new practice here now where a person who has been convicted for corruption … and gives interviews on media,” Education Minister Shafqat Mehmood told reporters following a cabinet meeting chaired by Khan.

“You are in custody, you are accused of looting the country, and when you come out you are giving interviews to everyone… This doesn’t happen in any democracy,” Mehmood said.

His comments came days after the airing of an interview with former Pakistani President Asif Ali Zardari, who is currently in jail while being investigated for alleged corruption. It was suspended within minutes of hitting the airwaves.

Hamid Mir, the journalist who interviewed Zardari, told Al Jazeera the current era of censorship was akin to the worst strictures he had seen in his more than 30 years in the media industry.

“We asked left and right but have not received to date any written orders from [the media regulator], or a phone call or a verbal message or communication from the government or the military on why the interview was taken off air,” he said.

Since earlier this week, Mir said his channel’s management had banned him from hosting his nightly TV talk show – one of the most popular in Pakistan – live, forcing him to prerecord it.

“I did a live with Maryam Nawaz on Monday, and the authorities were angered by this,” he said.

“The government has exposed itself to the whole world,” Mir added. “There was unannounced censorship before, distribution would be stopped through calls to cable operators… But now the whole world can see what is happening.”

‘You are beating us, stabbing us’

Last year, a CPJ report documented how the country’s military, which has ruled Pakistan for roughly half of its 72-year-history, “restricts reporting by barring access – encouraging self-censorship through direct and indirect acts of intimidation, and even allegedly instigating violence against reporters”.

Pakistan ranks142 out of 180 countries on Reporters Without Borders’ World Press Freedom Index.

Sadaf Khan, director at Pakistani media rights group Media Matters for Democracy, told Al Jazeera press censorship was at its worst in more than a decade.

“The indicators we used to use on press freedom being curtailed were primarily based on journalist safety,” she said. “Now, the number of targeted attacks is coming down but the way dissent is being targeted through legal instruments that is far more dangerous.”

Khan said the Pakistan Tehreek-e-Insaf-led government was “completely failing to abide by its own democratic responsibilities”.

A recent meeting of Pakistan’s Federal Union of Journalists resolved to hold a “black day” of protest against media censorship on July 16, as well as protests across the country, Mir said.

“Right now they are saying ‘we will beat you and we won’t let you scream’,” he said. 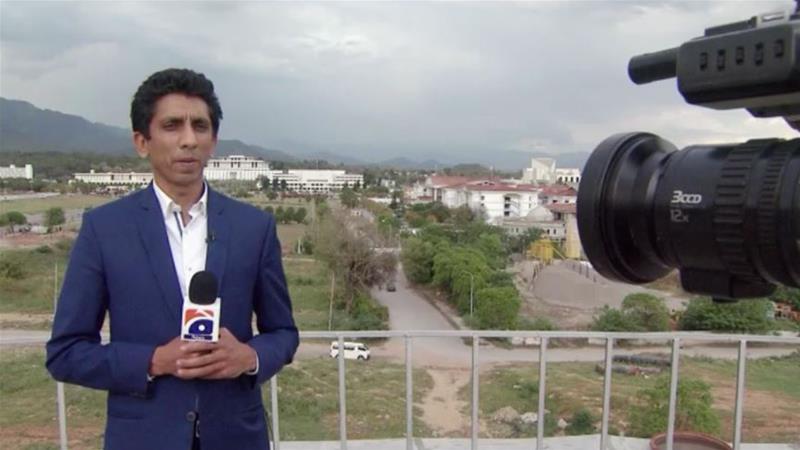 Geo goes dark: Media and the military in Pakistan