Houthi rebels incur higher death toll with 47 fighters killed as the battle for the strategic port city rages on. 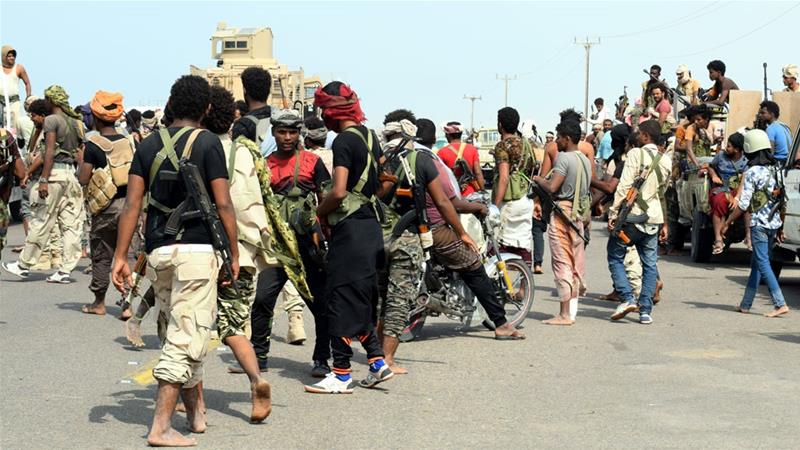 Dozens of combatants were killed as pro-government forces closed in on rebel forces in the heart of the Yemeni port city of Hodeidah on Thursday, hospital sources said.

Medics at hospitals inside the city reported 47 rebels had been killed in overnight ground fighting and air raids by a Saudi-UAE coalition supporting the government.

Sources at hospitals in government-held areas on the outskirts said 11 soldiers had also been killed.

Aid agencies have long warned that fighting in Hodeidah risks escalating the dire humanitarian crisis in Yemen, where about half the population – some 14 million people – could soon be on the verge of famine.

The Red Sea port city is the entry point for some 70 percent of the country’s commercial imports and a vast portion of the UN-supervised humanitarian aid.

Separately, rights group Amnesty  International warned against Houthi rebels taking up positions on a hospital rooftop in Hodeidah. The rights monitor fears that the rebels, accused of ties to Iran, might try to use health facilities and patients as human shields to ward off coalition air attacks.

Amnesty’s Samah Hadid says the Houthi presence on the hospital rooftop “violates international humanitarian law, but this violation does not make the hospital and the patients and medical staff lawful targets” for the coalition.

A military coalition led by Saudi Arabia and the UAE intervened in 2015 after Houthi rebels dislodged the internationally recognised government of President Abd-Rabbu Mansour Hadi.

Yemen is now home to the world’s worst humanitarian crisis, which has killed at least 10,000 people since 2015, according to the UN.

The death toll, however, has not been updated in years and is likely to be much higher.

The Armed Conflict Location and Event Data Project, an independent watchdog, recently said around 56,000 Yemenis had been killed in the violence.

UNICEF warned on Tuesday that the battle for Hodeidah placed the “lives of 59 children, including 25 in the intensive care unit, at imminent risk of death”.

The International Committee of the Red Cross on Wednesday appealed for warring parties to “spare civilians and civilian infrastructure” including ambulances, hospitals, electricity and water plants.

Maqdishi’s predecessor, Mahmoud al-Subaihi, has been held by the Houthis since 2014 when the latter seized control of the capital Sanaa.