Hong Kong: Chinese President Xi Jinping swore in John Lee, 64, as the city’s next chief executive on Friday – the first security policy expert to run the China-ruled international financial hub since its handover from Britain in 1997.

Lee, 64, a former probationary police inspector who rose to become deputy commissioner over a 33-year career, has been a divisive figure in Hong Kong.

Pro-democracy campaigners and overseas activists describe Lee as a hardliner and staunch Beijing loyalist who has faithfully implemented Xi’s tougher, authoritarian grip on what was once China’s freest city. 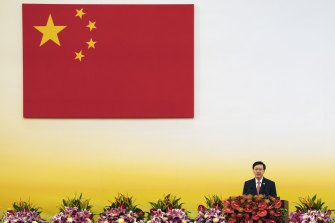 In his speech, Lee highlighted his twin political and economic priorities; saying Hong Kong needed to enhance its competitiveness in finance, trade and shipping while ensuring stability.

“The rule of law is a cornerstone and core value of the city’s success,” Lee told an audience, including Xi, in the same harbour-front convention centre where, a quarter of a century ago, British officials handed the city back to China.

Lee, who says safeguarding national security remains his “fundamental mission”, is aiming to enact more security laws this year, including against sedition, treason and fake news. 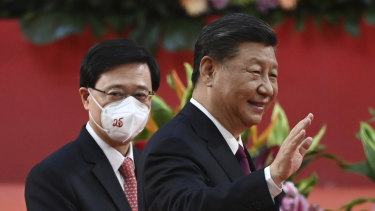 Before him, all of Hong Kong’s leaders were either career civil servants with broad policy expertise, or business leaders.

All have struggled to reconcile the needs of the Chinese Communist Party leaders with the desire of many Hongkongers for Western-style freedoms and democracy under a “one country, two systems” style of governance that promised the city autonomy for 50 years after the handover.

In the city for the 25th anniversary of that day, Xi declared there was no reason to change the formula. He said the security law was beneficial for the “democratic rights” of residents. Earlier he said the city had overcome its challenges and “risen from the ashes”. 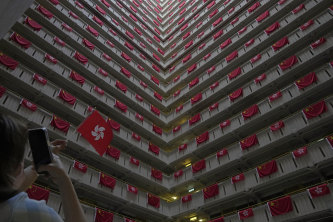 A woman takes a photo of the Chinese and Hong Kong flags hanging from a housing estate to celebrate the 25th anniversary of Hong Kong handover to China.Credit:AP

“What happened over the past 25 years has proven that the future and destiny of Hong Kong must be in the hands of the patriots who would cry proudly for being Chinese,” nationalist tabloid Global Times, which is published by the ruling party’s official People’s Daily, wrote in an editorial. “The great rejuvenation of the Chinese nation is irreversible and Hong Kong’s tomorrow will be even brighter.”

In 2019, when Lee was secretary for security in charge of all disciplinary forces, he was among those who tried to ram through a contentious bill to allow extraditions to mainland China for trial, despite growing public anger and protests.

He told a business group at the time that Hongkongers had nothing to fear from the mainland’s Communist Party-controlled courts. “He told us they were fair, just and transparent,” one source at the meeting said. “Our jaws hit the floor.”

The bill was later suspended but by then the demonstrations had snowballed into a full-blown movement demanding full democracy and greater autonomy from China.

In August 2020, after China imposed a national security law on Hong Kong, Lee – who helped set up a new national security police division with unprecedented investigative powers – was sanctioned by the US alongside 10 others for “fundamentally” undermining freedoms and allowing “China’s security services to operate with impunity”.

Lee and Chinese officials have repeatedly defended the law, saying it has restored stability.

In 2021, Lee was promoted to the No. 2 job, paving the way for his endorsement as the city’s next leader in May by a 1500-member committee stacked with Beijing loyalists.

Avery Ng, an activist recently released from prison, said police had targeted more than 10 members of his group, the League of Social Democrats, with search warrants, surveillance and warnings not to protest during Xi’s visit.

“This is the first July 1 ever that we’ve not had any protest,” he said.

Although Lee has criticised sanctions as the acts of “some bullying countries”, there are signs he is trying to mend some diplomatic ties and Hong Kong’s battered international image.

“He is generally warm and engaging,” one senior Western diplomat who has met Lee recently, told Reuters. “But if the conversation goes anywhere near national security or collusion, his whole face and expression and demeanour changes.”