The Duchess of Sussex owns Cartier jewellery worth a fortune but her mother, Doria Ragland, has far simpler tastes.

I can reveal that she has started a new job as a teacher showing students how to make hippy jewellery.

Doria, 63, who quit her post as a social worker at a mental health clinic after her daughter married into the Royal Family in 2018, is teaching at a community college in Los Angeles. 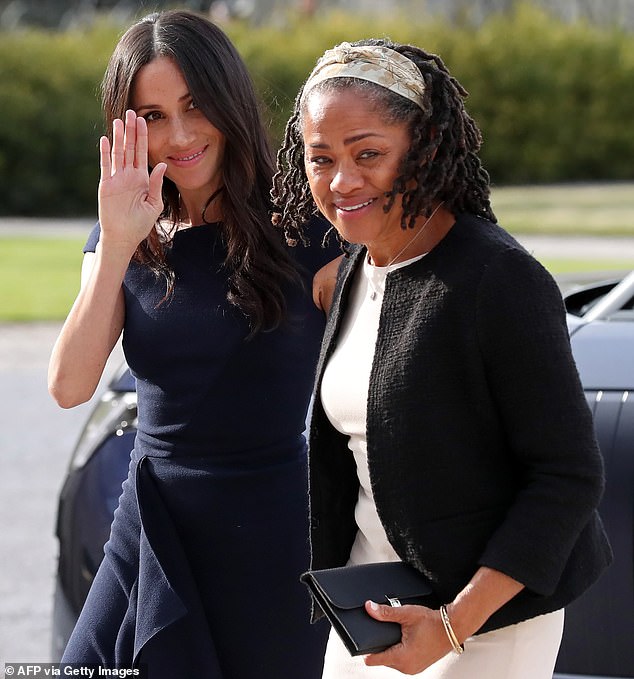 Doria (pictured with Meghan), 63, who quit her post as a social worker at a mental health clinic after her daughter married into the Royal Family in 2018, is teaching at a community college in Los Angeles

Her classes show students how to design bohemian ‘floating’ pearl necklaces, create multi-strand bracelets and ‘linked necklaces’ made of wire.

The lessons at Santa Monica College, which are currently on hold due to the pandemic, cost between £29 and £33 and are held at the campus nine miles from her home.

The college was the scene of a mass shooting in 2013 that left five dead.

Meghan, who has gushed about her mother having a ‘free spirit’, recently moved into an £11 million mansion with Prince Harry and 15‑month-old Archie 90 miles away in Santa Barbara.

Her mother’s biography on the college website states: ‘Doria Ragland is a local artist who has been designing jewellery and clothing for over ten years. 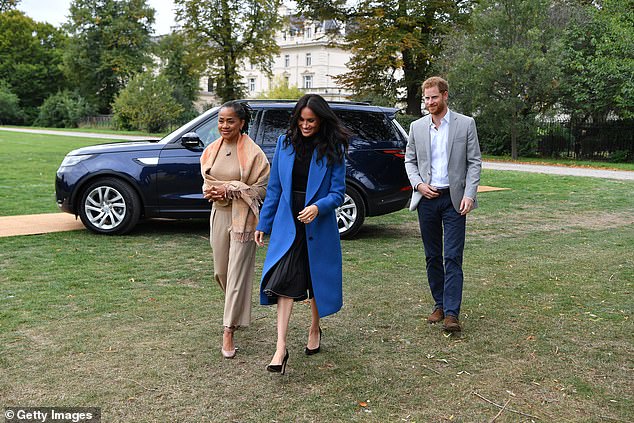 Her classes show students how to design bohemian ‘floating’ pearl necklaces, create multi-strand bracelets and ‘linked necklaces’ made of wire. Pictured: Dora, Meghan and Harry in London in September 2018

She has participated in some of the finest art shows in the country and has received awards for her designs. She loves teaching and believes in wearing handmade jewellery.’

Doria was a make-up artist on television show General Hospital when she met Meghan’s father, Thomas Markle, a lighting director.

She used to sell jewellery that she had made herself to help the family finances.

Meghan was six years old when her parents divorced and she lived with her mother until she was a teenager, when she moved to live with Thomas. 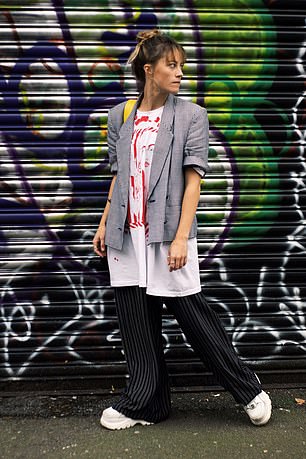 Her great-grandfather was the distinguished admiral and statesman Earl Mountbatten of Burma, but Jordan Anne Brudenell appears to take after the artistic side of her family.

It gives trendy new twists to second-hand clothes, although she prefers the term ‘pre-loved’.

She tells me: ‘It’s called Adopted Threads because all the clothes are pre-loved and then uniquely adapted by in-house designers.’

Jordan Anne, 25, whose parents are the artist Edwina Hicks and former actor Jeremy Brudenell, explains: ‘Some pieces appear more female, but it’s so fluid nowadays that it doesn’t matter.’

In her spare time, she works as a studio manager for Vogue photographer Miles Aldridge.

Jordan Anne puts sustainability at the heart of her label, saying: ‘Given the crazy times we’re going through, and wider concerns about the environment, this is the perfect time for people to change their lifestyles.’

Though blessed with 3,000 acres in Lincolnshire and another 1,000 in Yorkshire, Samantha Cameron’s baronet father, Sir Reginald Sheffield, has no intention of cutting himself off from the rest of humanity.

Quite the reverse, in fact: Sir Reggie is helping staycationers get a taste of the high life at Sutton Park, the Grade-I family seat ten miles north of York, which he keeps an eye on with his son and heir, Robert.

‘Are we about to let out one of Yorkshire’s best kept secrets?’ they teasingly inquire on social media, adding that Sutton, where BBC drama Gentleman Jack was filmed, boasts ‘stunning views’ — and its own caravan site. Prices start at £10.50 per night.

‘We’ve seen a great deal of interest,’ Robert tells me. ‘We’re planning to develop a treehouse retreat in the coming year.’

Plus, surely, a special campsite reservation for Sam Cam and Dave — and Dave’s £25,000 shepherd’s hut.

‘I haven’t seen much of him, even though he lives about an hour away,’ the ex-wife of Rolling Stone Ronnie Wood tells me.

‘Lockdown has shown people what’s important, and who’s important. My family, I realise, are my priority.’

War hero Lord Bramall, whose final years were overshadowed by false allegations of sexual abuse, was typically generous with his will.

Probate documents reveal that 80 per cent will be shared between his son, Nicholas, and daughter, Sara, with the rest going to his two grandchildren, the helpers who cared for him and good causes.

‘I must say my memory is getting worse,’ admits Thewlis, who played Remus Lupin.

‘Not for things like learning lines, but someone just asked me what I’d been watching during lockdown and I couldn’t remember one damn thing.’

He’s not the only one…