Victoria's Police Minister Lisa Neville says organisers of two Melbourne beach parties that breached coronavirus restrictions over the weekend have been charged, while multiple attendees have been fined.

Ms Neville said on Wednesday that police were aware of four parties at Melbourne's beaches over the weekend that were larger than Victoria's outdoor gathering limit of 10 people, although she said police intentionally refrained from fining every partygoer who broke the state's mandatory mask rules. 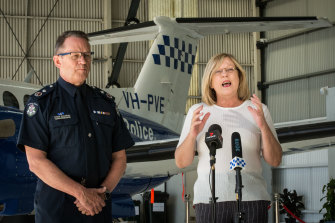 Earlier this week Premier Daniel Andrews said he would follow up with police after dozens of revellers were seen without a mask at a party at Half Moon Bay in Black Rock on Sunday night before police broke up the event.

Ms Neville said organisers of two parties at which guests failed to leave once police arrived had been "fined and charged". There were "a number of other breaches" of bylaws such as drinking in public, which is banned on beaches and parks in the City of Port Phillip and some areas of Bayside City Council.

The Police Minister said partygoers at two other events who did leave as soon as police arrived were spared fines, in line with a less iron-fisted approach as Victoria's coronavirus case numbers remain low and restrictions continue to ease.

"In this environment, if people are listening and not blatantly trying to challenge police on the directions, that's a great outcome and that's what we need to see … and that reflects the times and the COVID challenges that we have," she said. 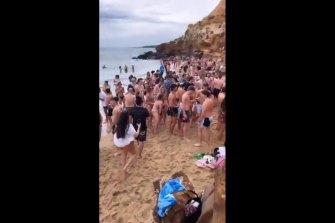 The Premier has flagged a relaxation of compulsory mask rules on Sunday and limits on the number of people allowed to gather will likely rise to 50. Police patrols have become increasingly visible around St Kilda beach as Melbourne's weather warms up.

A Victoria Police spokeswoman said 23 fines were issued in Victoria over the weekend for breaching coronavirus restrictions – compared to 387 in the last weekend of August, when the state remained under its strictest stage four guidelines.

The Age has requested further details from police on the party organisers whom Ms Neville said had been charged.

Ms Neville said police did not always issue fines on the spot because of the large numbers and were still investigating the weekend's beach parties through body-worn cameras and "other intelligence that enables them to take that action". 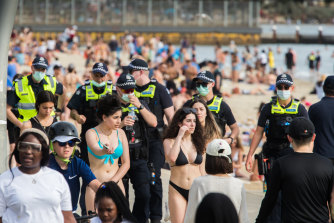 Ms Neville said police were not instantly issuing fines to every person not wearing a mask.Credit:Jason South

Police's hardline approach over months of tough restrictions resulted in more than 19,000 coronavirus-related infringement notices being issued by mid-October.

After 19 days of zero coronavirus cases, however, the Police Minister said Victorians would not be instantly fined for not wearing a mask.

Instead, she said officers' jobs had become "much more of a reassurance role, to try and encourage people to follow the rules and understand the rules that still apply".

"That doesn't mean people shouldn't follow the rules," she said. 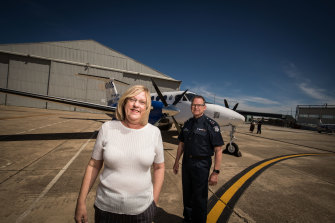 "Victoria Police are using their discretion to do much more of that reassurance and information and advice, but continuing to fine those people who are blatantly, deliberately [breaking rules] – and there are those people, who say 'no way am I dispersing, no way am I wearing a mask'.

"I think [police] have got the balance right between the tough times and these, you know, more relaxed situations."

Speaking at Essendon Fields airport at the unveiling of a $63 million air wing upgrade for police helicopters that can fly from Melbourne to Shepparton in 20 minutes, Ms Neville said her daily briefs indicated police were continuing to do proactive checks on retail and hospitality, alongside Department of Health and Human Services authorised officers and WorkSafe.

"It's a co-ordinated response that sits in the state control team and State Control Centre, about who's doing what, what intelligence is used and who gets sent where."

Police no longer provide daily updates on the number and type of fines distributed each day.

The Premier will announce a further relaxation of coronavirus restrictions on Sunday, when home visits are expected to increase to 10, public gatherings will grow to 50 and hospitality could be able to host 100 customers indoors and 200 outdoors.