The University of Melbourne student union has rescinded a controversial motion calling for the university to boycott and divest from Israel after being threatened with legal action and a potential class action.

Postgraduate law student Justin Riazaty, 21, engaged pro bono lawyers to send a letter of demand to the University of Melbourne Student Union calling on them to rescind the motion and apologise. 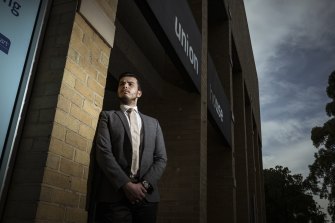 The motion passed on April 29 called for the university to launch an academic boycott and cut ties with “Israeli institutions, researchers and academics that support the Israeli oppression of Palestinians”. It also called for divestment from corporations involved with Israel.

In a meeting on Thursday, the student council reiterated it was “committed to a voice on the Palestinian cause”, but proposed to rescind and amend the motion “due to a desire for UMSU’s funds to not be unnecessarily spent defending legal proceedings”.

The council moved to draft a bridging motion to explain the reasons for the rescission, and that UMSU would undertake a consultation process and establish a working group, to develop and move a new motion that would pass with due diligence and in the interests of members.

Riazaty, a Liberal Party member who is not Jewish but claims to have many friends who are, said at the time that he believed UMSU acted outside of its purpose as a student union by violating the Associations Incorporation Reform Act 2012 and the Racial and Religious Tolerance Act 2001.

“There are going to be students, as has happened in this instance, that are going to take steps to right what is a wrong and to seek justice,” he said.

“Hopefully, it will help show students that all students matter, and they should feel safe expressing their views, whatever these views should be. A representative body shouldn’t be taking sides, especially on complex political issues when that is not what their mandate is.”

Riazaty said he would call on the union to apologise for the hurt they’ve caused to both Jewish and non-Jewish students in making them feel “unsafe and vilified”.

“I do trust that the union now recognises that their actions have consequences and their antisemitic propaganda will not go unchecked.”

But Australian Lawyers Alliance spokesman Greg Barns, SC, who had offered his support to UMSU pro bono, said university student unions had a history of speaking out on political matters.

“The law should not be used to try and curtail freedom of speech and freedom of expression, particularly to threaten students with legal proceedings is a very heavy-handed tactic and it ought to be discouraged,” he said.

“If people have an alternate point of view on an issue of public importance there ought to be a dialogue not a resort to lawyers and I think that this, if they have rescinded the motion, I think it’s extremely disappointing and it sets a dangerous precedent that all you have to do is get a threatening letter from lawyers and you’ll be able to shut down legitimate debate.”

He said student unions around Australia had a history of getting themselves involved in legal matters and that student unions were heavily linked to actions such as protests against the Vietnam War and apartheid in South Africa.