Incredible photographs taken by an urban explorer have revealed the inside of an abandoned WWII club for Polish veterans which has stood untouched for decades in the centre of a busy Manchester town.

The empty building full of ‘lost treasure’, in Stretford, Trafford, once served as the meeting place for the Manchester branch of the Polish Ex-Combatants Association and is packed with memorabilia that veterans left behind.

Haunting photos posted by a photographer to his urban exploration social media page show the rooms cluttered with dusty covered historical memorabilia that has remained in the old church since it ceased to be a social club in 1996.

Included among the extraordinary collection are veterans’ banners, Polish flags, paintings, books and documents belonging to the post-war Polish community in the city. A piano is seen in a dilapidated event hall inside abandoned WWII club for Polish veterans in Stretford, Trafford, Manchester 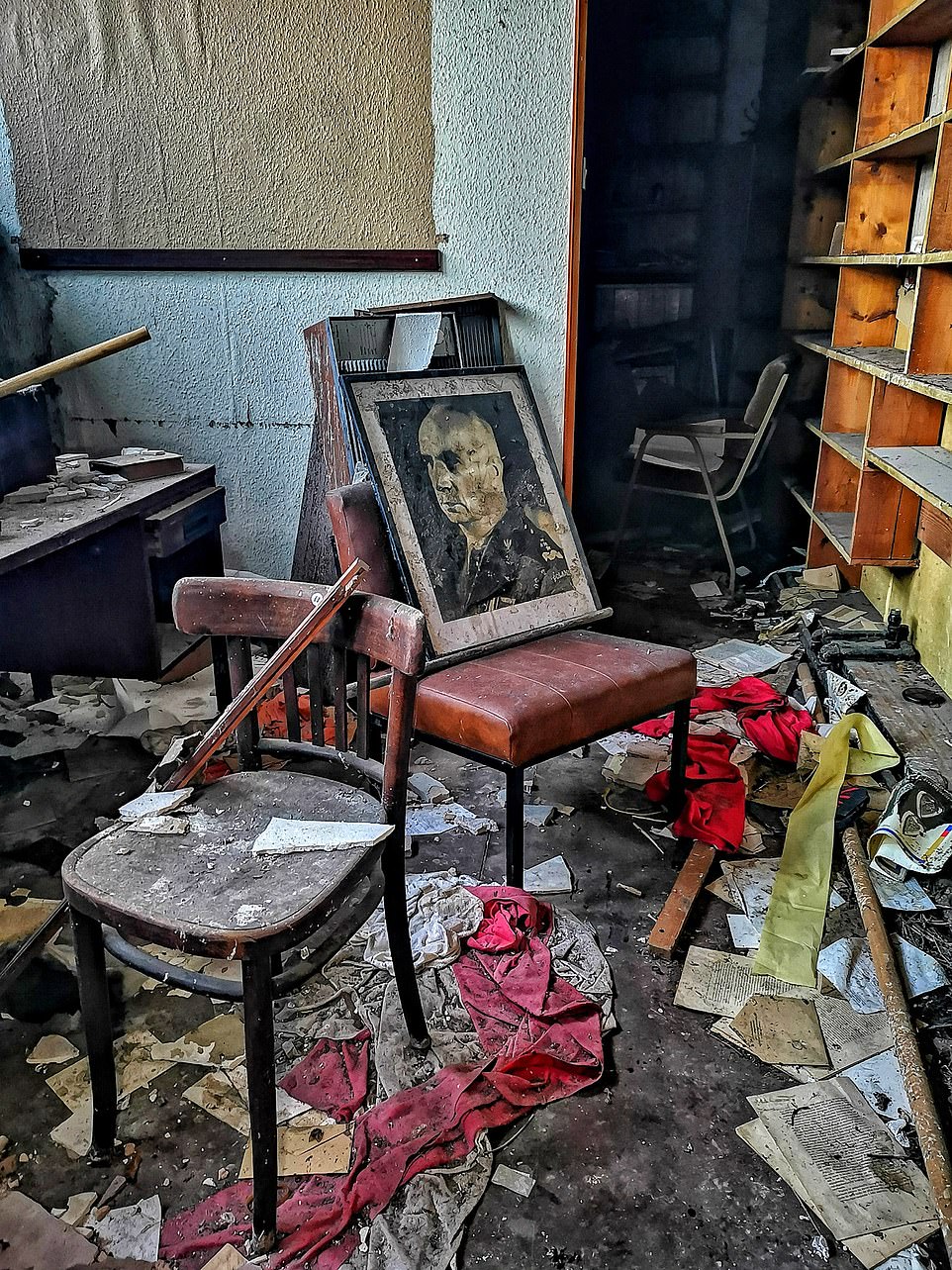 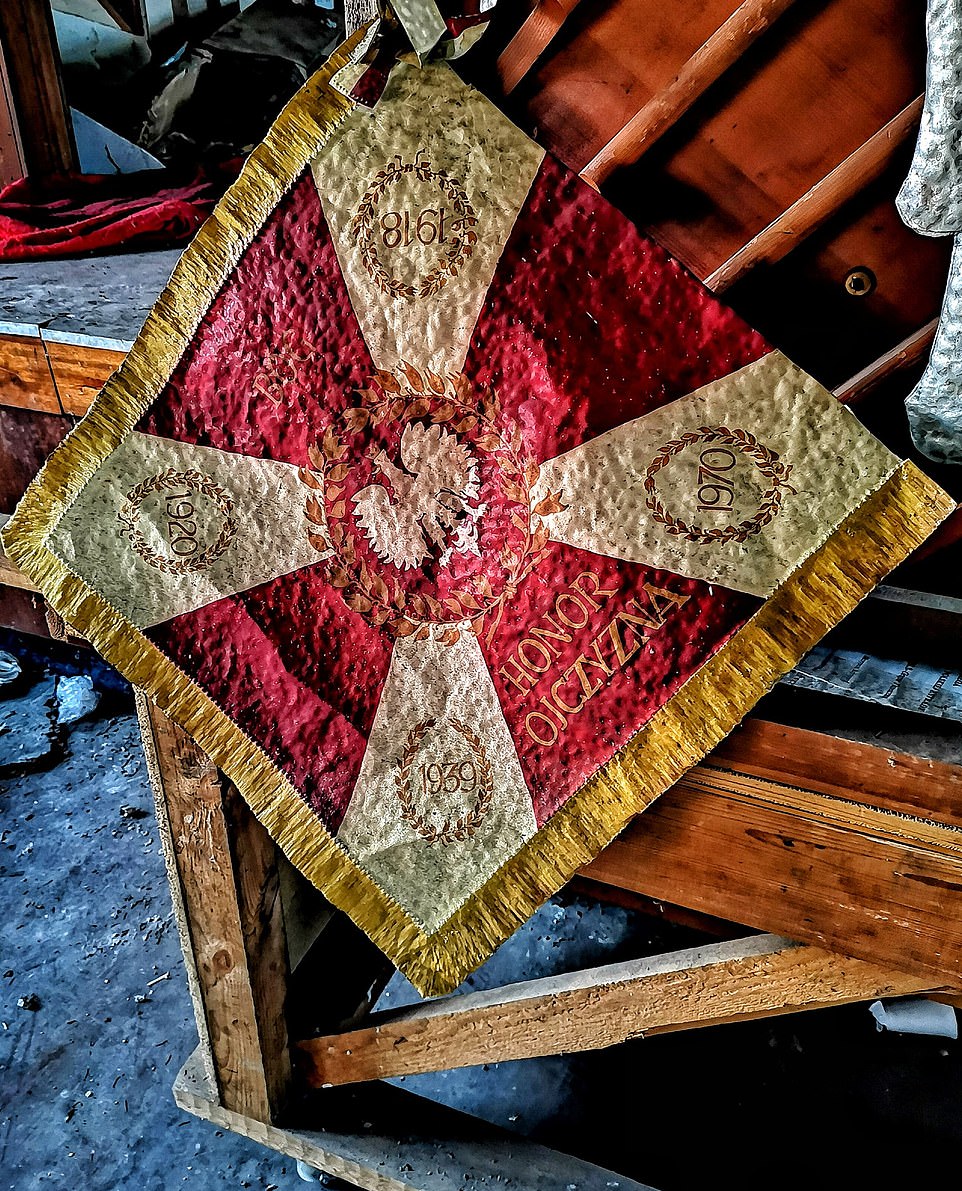 An urban explorer inside the building’s large concert hall, holding a ceremonial flag whilst standing on a stage

The Polish Ex-Combatants Club (Polski Dom Kombatantów) opened in May 1949, four years after the end end of the Second World War, others were opened in areas including Glasgow, Sheffield and London.

The social clubs catered for the 150,000 Polish Armed Forces personnel and their families who decided to stay in the UK following the war, rather than return to Poland and face repression by the communist rule – making them one of the largest ethnic minorities in Britain at the time.

Hand-embroidered banners decorated with patriotic slogans which can be seen in the photos would have accompanied Polish veterans at all ceremonies and would have been objects of immense pride to the Polish soldiers and their families.

Urbex photographer Matt, who published the photos on his Lost Places and Forgotten Faces page said: ‘I was in complete shock and awe with not only how many items were still in the building, but also what the items represented.

‘It was incredible to see it all, almost like finding lost treasure. It was a shame to see the state of the place, not only the vandalism but the amount of books and religious materials still left sitting in there. 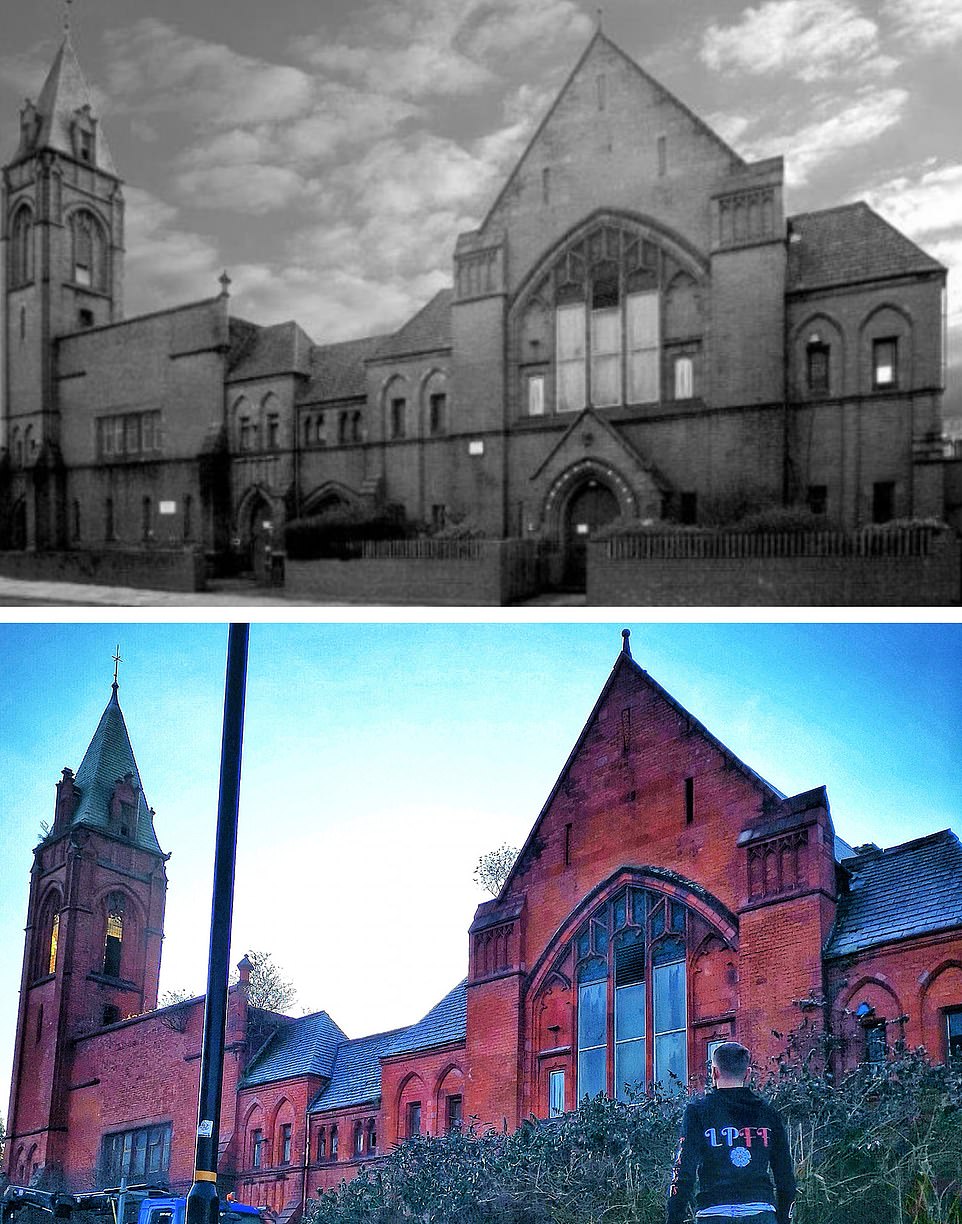 The Polish Ex-Combatants Club (Polski Dom Kombatantów) opened in May 1949, four years after the end end of the Second World War (seen around that time, above) and was sealed up in 2017. (pictured now, below) 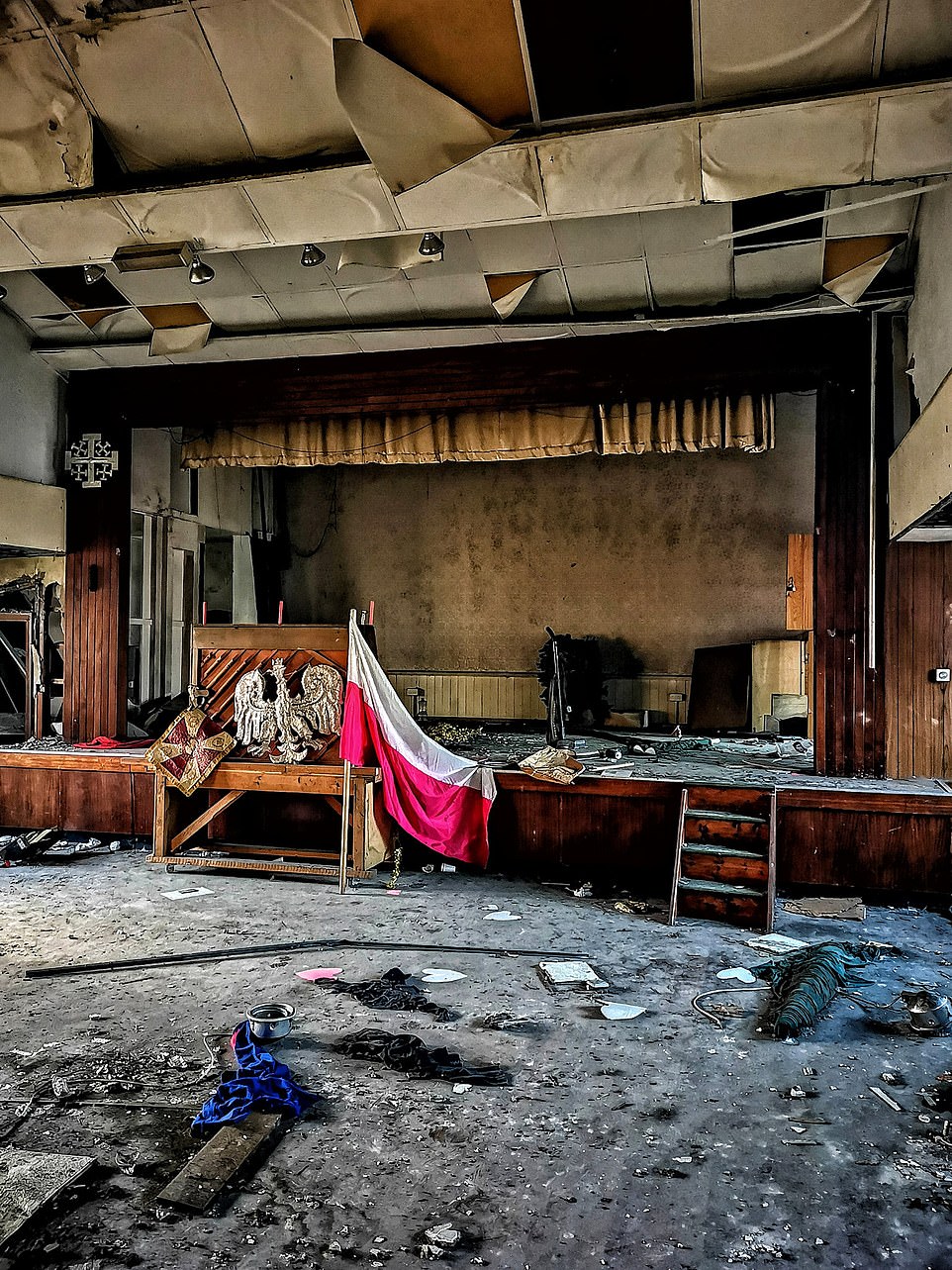 The building’s opening ceremony was performed by Lieutenant General Odjiezynski, a former Chief of Staff in the Polish Army in the presence of General Kopanski, one of the defenders of Tobruk, and the mayor of Stretford Eric Forbes 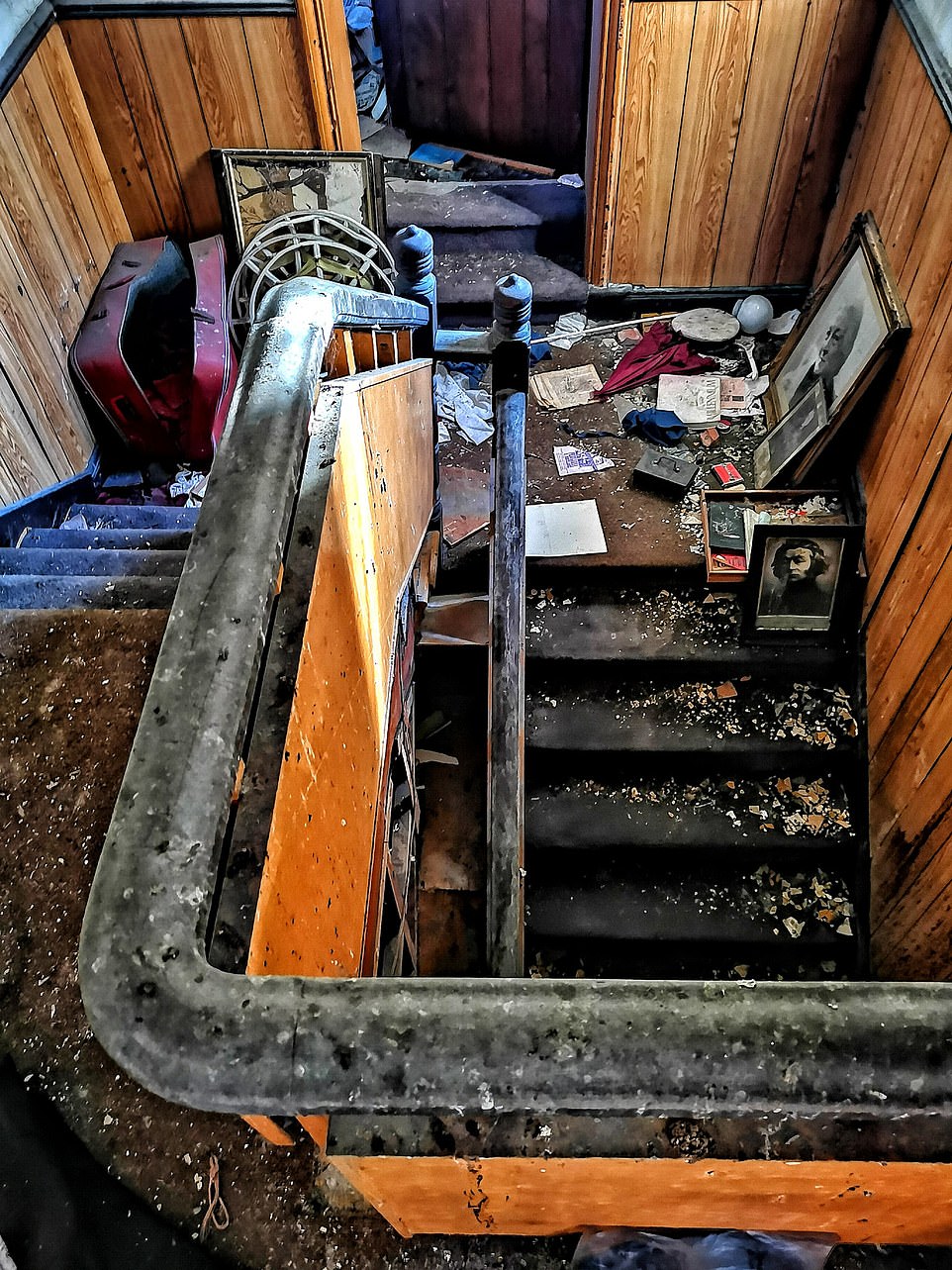 A stairway is seen, with a suitcase and various photographs propped up in the now disused space 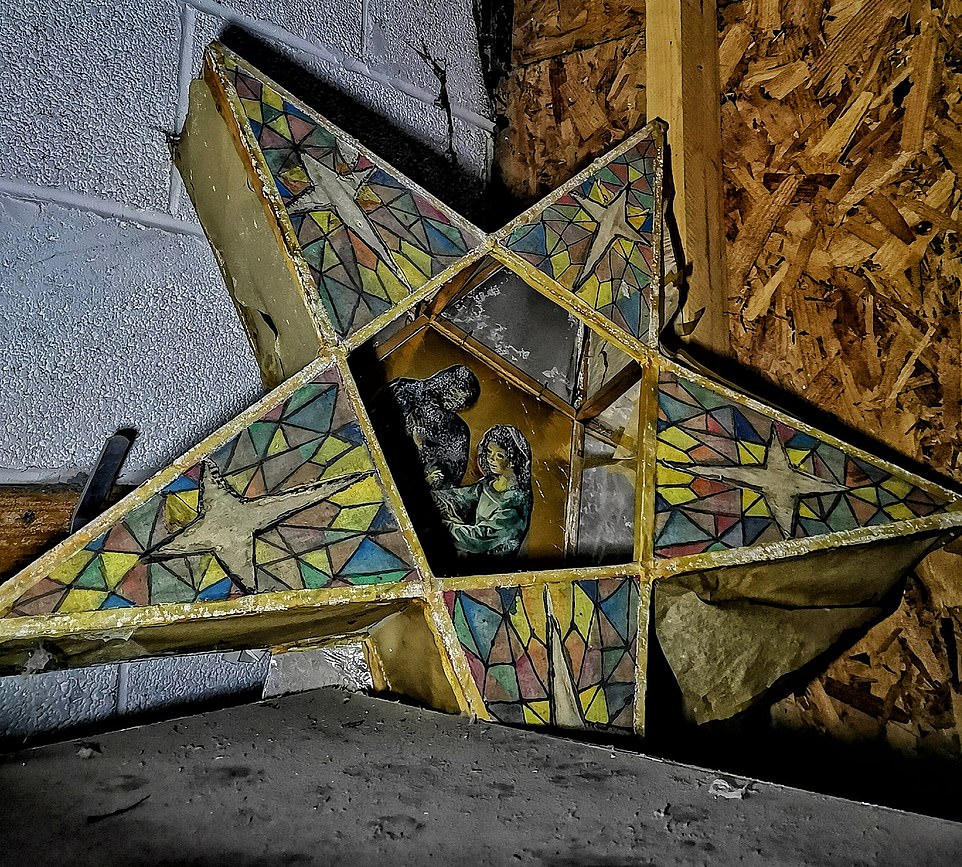 A stain glass effect star, which appears to have been handmade, sits next to a coat rack in one of the derelict rooms. The building was blessed by Father Jan Bas of St, Alban’s, Manchester, when opened A paneled ceiling has fallen down in one of the rooms which appears to have been an office, with desks and a large bookcase 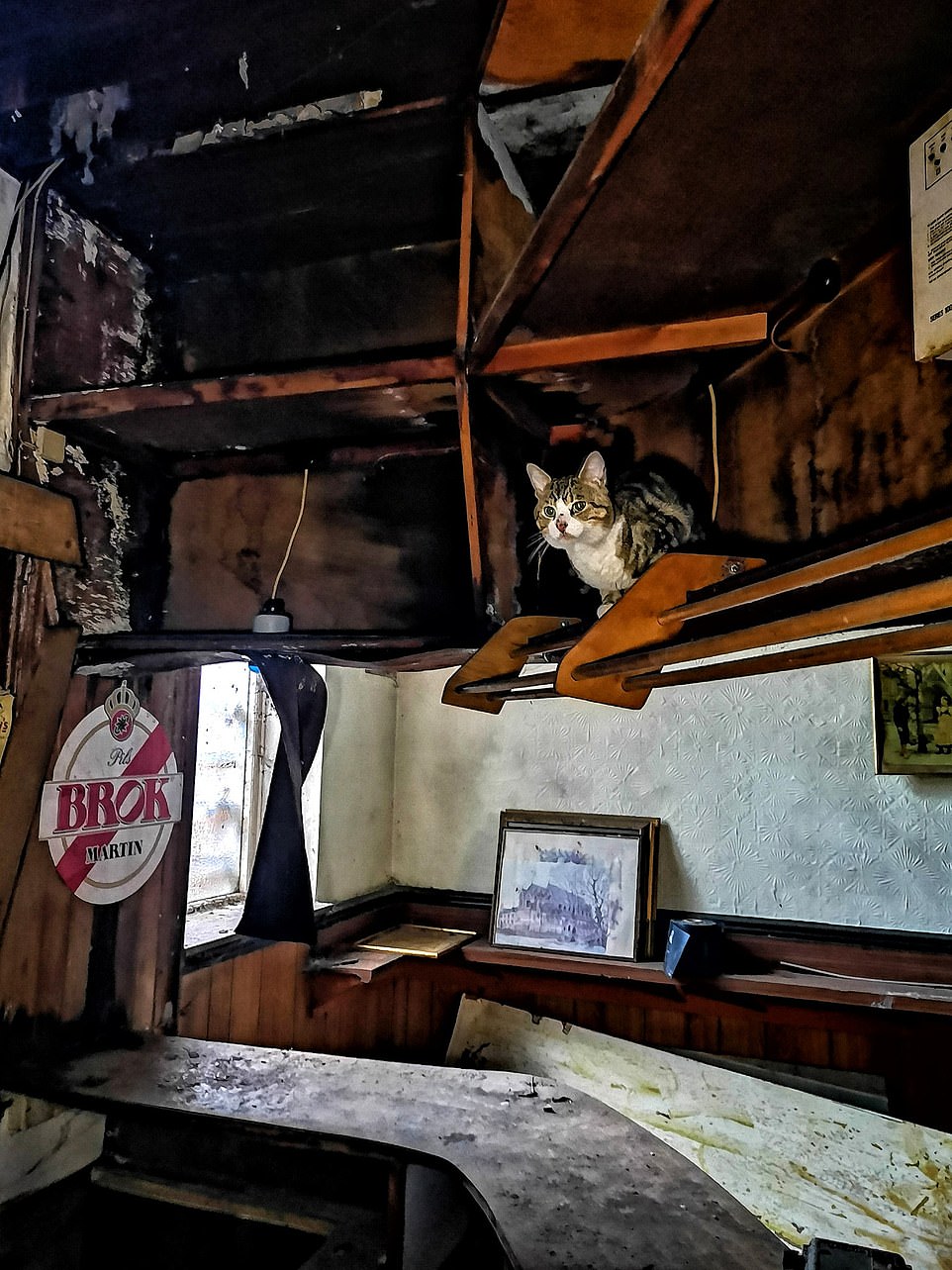 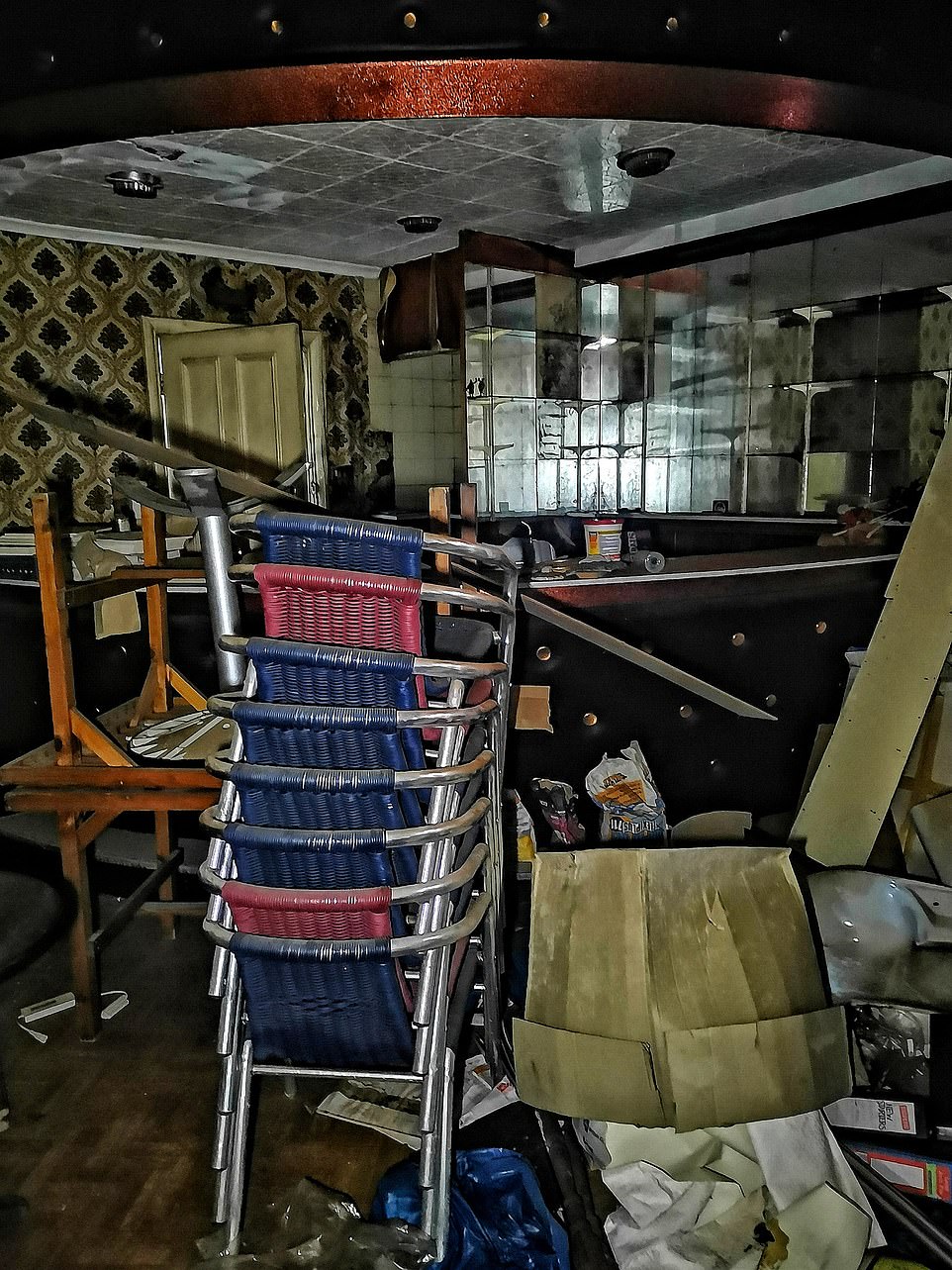 Stacks of chairs are seen along with piles of rubbish in the once busy social bar, with a mirrored wall 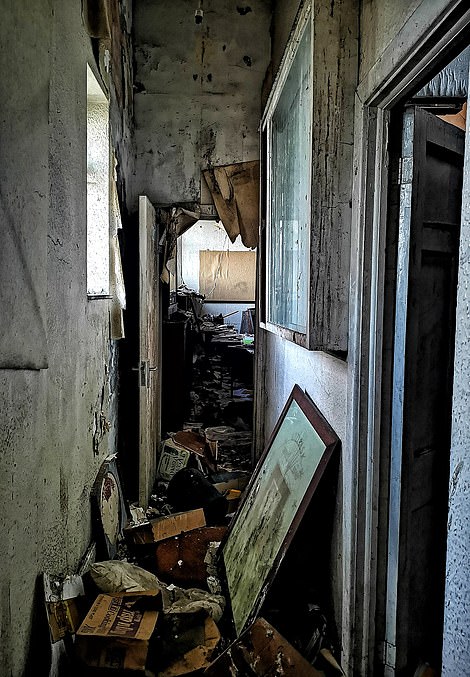 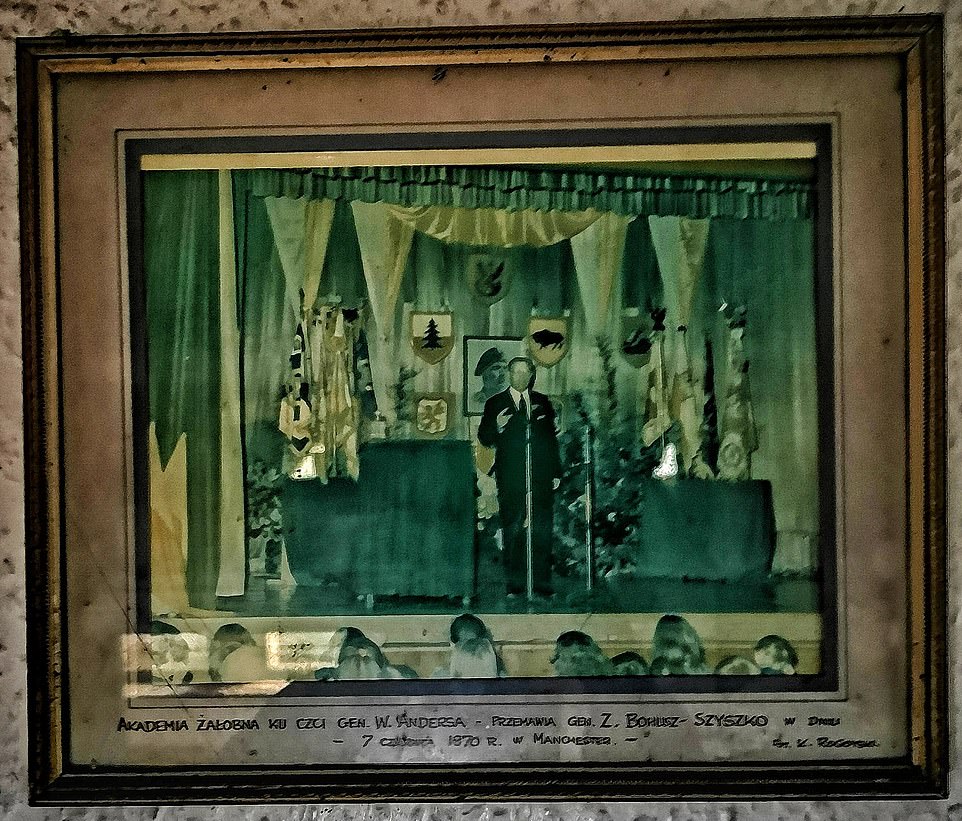 A picture dated 1970 remains hung on the wall, appearing to show a class watching a speech

‘I could see as well that much of it was still in very good condition, and needed to be salvaged and given back to the Polish community before it was lost forever.’

By 1996, the building was suffering from structural issues, resulting in one section being closed. Due to a lack of funding for maintenance, the rest of the building was sealed by the end of 2007, and has remained derelict ever since.

In April 2020, it was sold to a developer and planning permission was granted for the re-development of the site, which includes demolition of the building. 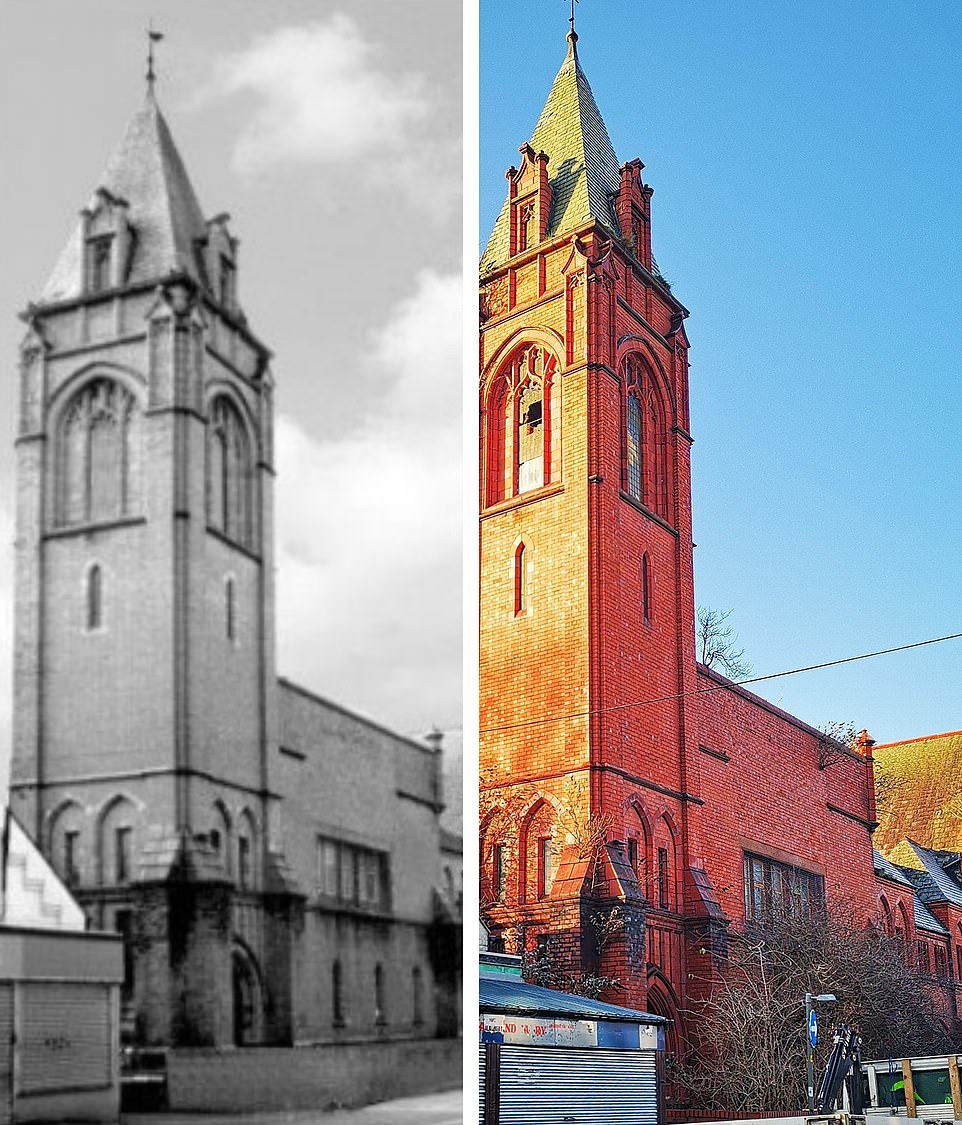 The facade of the building in the 1950s (left) and now (right), which has remained largely unchanged unlike the interior A plaque appearing to mark the creation of the Chapel. The social club was originally the Moss Side Unitarian Free Church Signs reading ‘office’, ‘library’ and ‘open’ in Polish. In April 2020, planning permission was granted for the re-development of the site, which includes demolition of the historic building 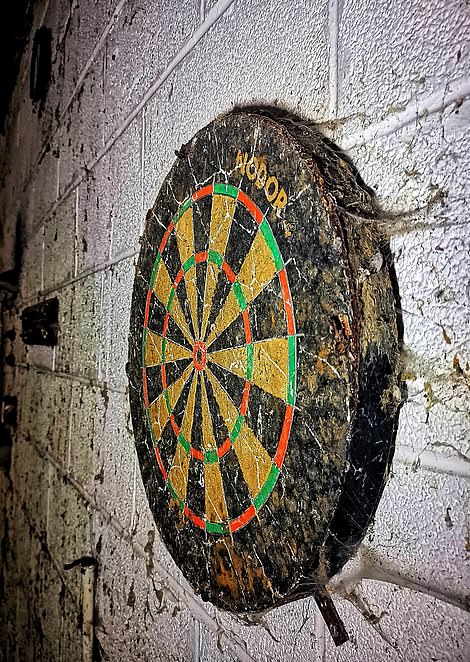 Now the Polish Consulate General in Manchester has stepped in to preserve the savable items for future generations before the building is renovated. Pictured: A doorway marked ‘members only’ and a dart board (right) The Polish Consulate General in Manchester responded to the social media post, stating that action had been taken to recover the items

Matt said: ‘It seems that when the building closed, the community was never given the chance to retrieve these items.

‘I feel it’s not too late for them to be collected, and placed in Polish churches and museums for future generations to enjoy.’

Now the Polish Consulate General in Manchester has stepped in.

‘Through the city authorities, the Consular office has asked the owner to provide access to the building in order for us to protect the souvenirs remaining from the activities of this institution and the national symbols found there.’