The Met Office has issued a raft of yellow weather warnings over the next three days, with snow, rain and icy conditions expected to cause disruption for swathes of the UK. Most of Scotland and northern England, along with some areas of Northern Ireland, fall under the alerts, with the first being an ice warning in place until 11am today.

The Met Office states: “Rain and snow will clear southwards later Monday and overnight into Tuesday, with a rapid freeze following.

“Some hilly areas will see a further cover of 1 to 3cm snow beforehand.

“Ice will become widespread over northern Scotland from around dusk, much of the rest of Scotland by late evening or the early hours, and across northern England later in the night.”

Much of Northern Ireland, including Belfast and Londonderry, is also under a yellow ice warning until 10am today. 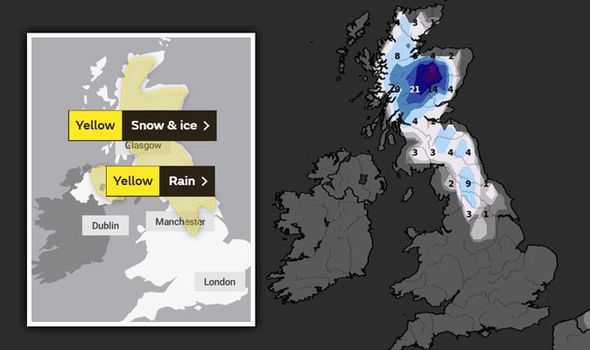 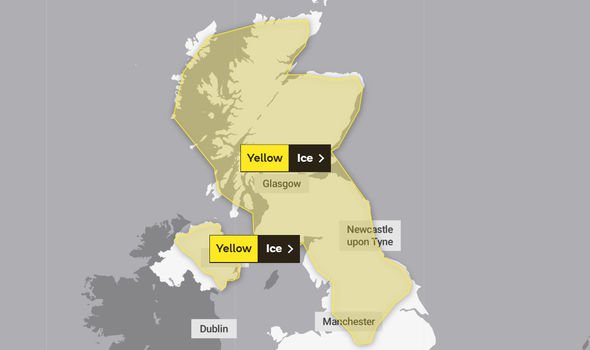 Some parts of the UK could see some snow today or tonight, according to the Met Office’s latest forecast.

“Cloud, rain and milder air” is forecast for the southern half of the UK, and it is expected to become “confined to the south-west of England and west Wales”.

While it is expected to be cold and sunny elsewhere, the Met Office forecast for today states a “few wintry showers” could appear “near coasts in the far north and east”.

Tonight, the Met Office forecast states: “Cloud and rain in the southwest returning eastwards and becoming heavy across Northern Ireland, western Scotland and northwest England with a risk of sleet, snow and ice. Cold and clear elsewhere.” 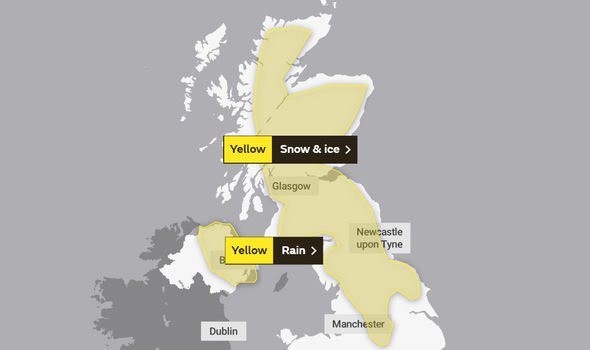 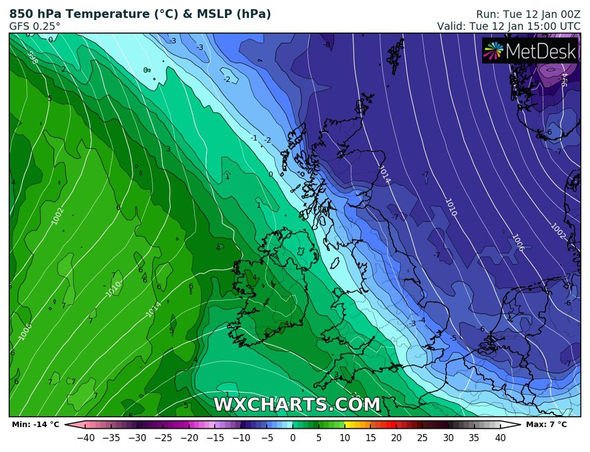 Then from 3am on Wednesday until 9am on Thursday, much of Northern Ireland is under a yellow rain warning.

The Met Office has warned some areas could see up to 60mm (approximately 2.5 inches) of rainfall, most likely across northern parts of Antrim, which could lead to some flooding.

Also on Wednesday, the Met Office is forecasting up to 12 inches (30cm) of snow accumulation could be possible in some areas under a yellow snow warning. 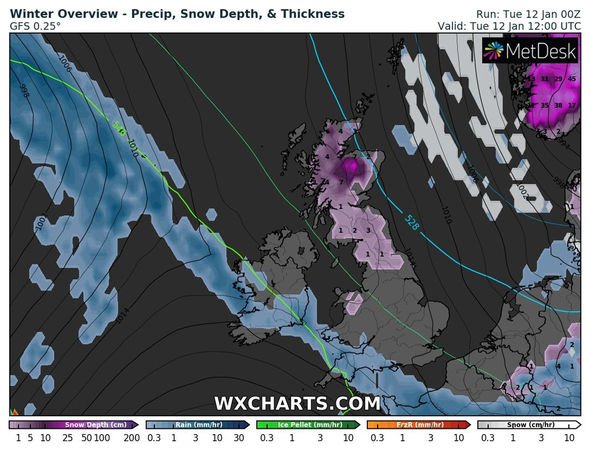 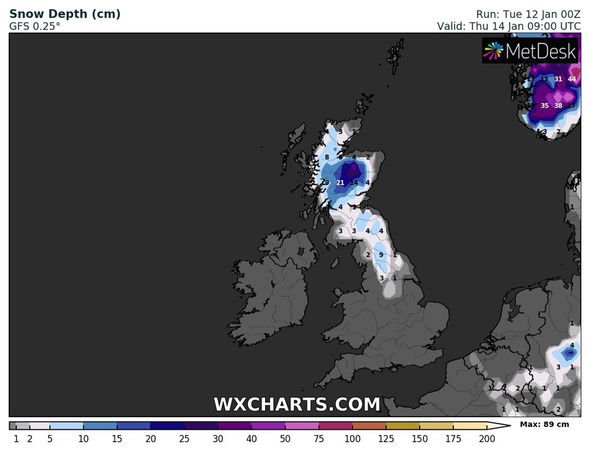 The snow warning is in place from 5am on Wednesday until 9pm on Thursday.

The Met Office snow warning states: “An area of rain pushing north-eastwards is expected to increasingly fall as snow, at least for a time, as it encounters colder air across Scotland and parts of northern England.

“Heavier snowfall is more likely above 150m, where 5-15cm of snow may accumulate, and possibly as much as 30cm of snow in a few locations.

“At lower levels, 2cm to 5cm may accumulate but there remains a possibility that milder air makes more inroads, with the snow turning back to rain more widely, in this case snowfall would largely be restricted to the highest ground.

“A brief period of freezing rain, which would bring areas of ice, is possible in the western, especially south-western, part of the warning area on Wednesday morning.”

WXCHARTS snow depth maps, which use data from MetDesk, show snow accumulations across Scotland and northern England on Thursday morning.

The heaviest snow depth is forecast for some areas in Scotland, where as much as 21cm (approximately 8 inches) of snow could accumulate by Thursday.

Heavy snow depth is also mapped for other parts of Scotland, while the heaviest snow depth in parts of northern England is predicted to be some 9cm (approximately 3.5 inches).