‘The youth of Mexico are disappearing’: New report shows that more than 73,000 people are currently missing, with majority under 30, as the nation struggles with kidnappings, killings and human trafficking

New government data found that 73,201 people – 75 percent of whom are between the ages of 15 and 30 – are missing in Mexico, largely a result of the constant violence between rival criminal organizations.

Those figures were up dramatically from just January, when data showed 11,500 fewer people reported missing. Overall, 177,863 people have been reported missing between 1964 and July 14, 2020.

The latest figures that were released Monday by the National Search for Missing Persons Commission underscored the trauma suffered since 2006 when the country began a militarized push against drug cartels under former president Felipe Calderón.

Since then, at least 71,678 people have been reported missing, including 27,871 since President Andrés Manuel López Obrador took office in December 2018. 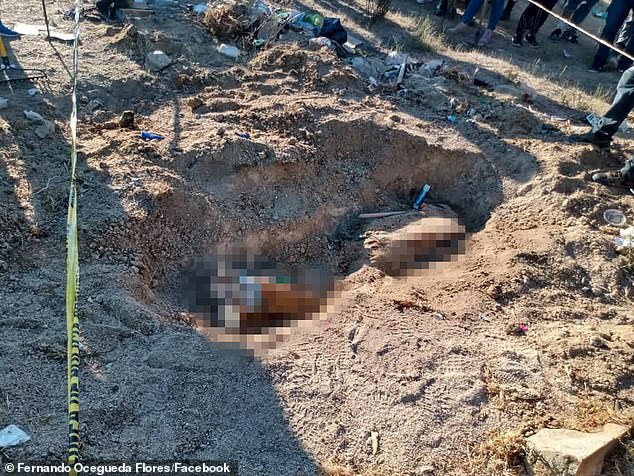 Pictured is one of the five bodies found earlier this month at a clandestine grave in Baja California, Mexico.  A report released by the country’s National Search for Missing Persons Commission revealed that 73,201 are missing 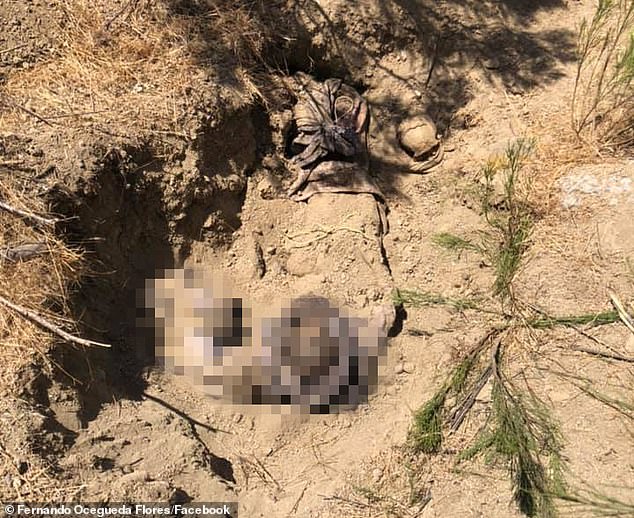 A missing individual’s body sticks out of a secret burial site in the Mexican state of Baja California. The remains were one of five body parts located during a six-day stretch spanning the first and second week of July 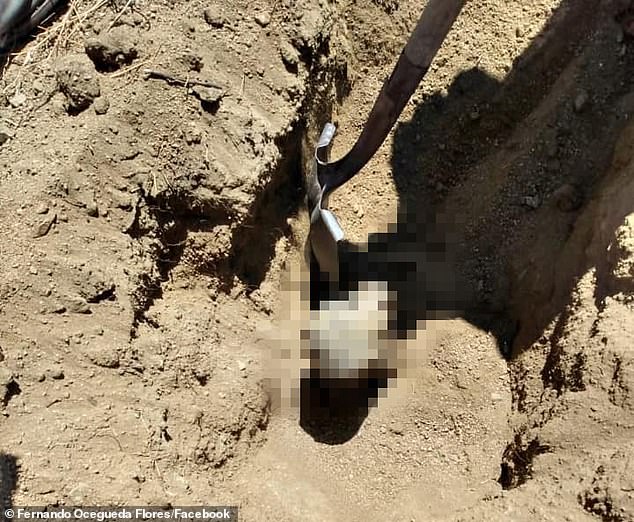 The data showed that more than 12,000 children are missing – most of them girls.

‘When we talk about numbers we must remember that those are names, those are lives and families. What was presented yesterday is a very critical and serious fact of more than 73,000 disappeared people,’ said Karla Quintana, the director of National Search for Missing Persons Commission. ‘The public version that we presented [Monday] allows us to see different elements, depending on what you’re looking for look, [but] it should be noted that the youth of Mexico are disappearing.’

The disappeared suffer crimes from kidnapping to homicide, but authorities have said some are likely victims of human trafficking, from young men threatened to work for drug cartels to women forced into the sex trade.

Monday’s update, however, showed no suspected trafficking victims, although the list was still lacking data from some states.

The country has been criticized for its incomplete and even misleading data on the crime. Homicides and femicides rose to record levels last year in Mexico.

‘We have made it a priority to give answers to the victims of violence in our country, so they can have their right to the truth and to justice,’ Interior Minister Olga Sanchez said in a news conference. 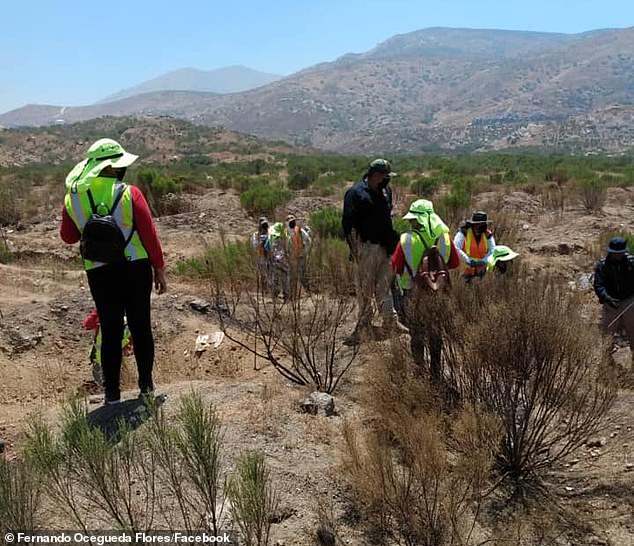 Volunteers canvass a remote area in Baja California, Mexico, for the remains of missing persons 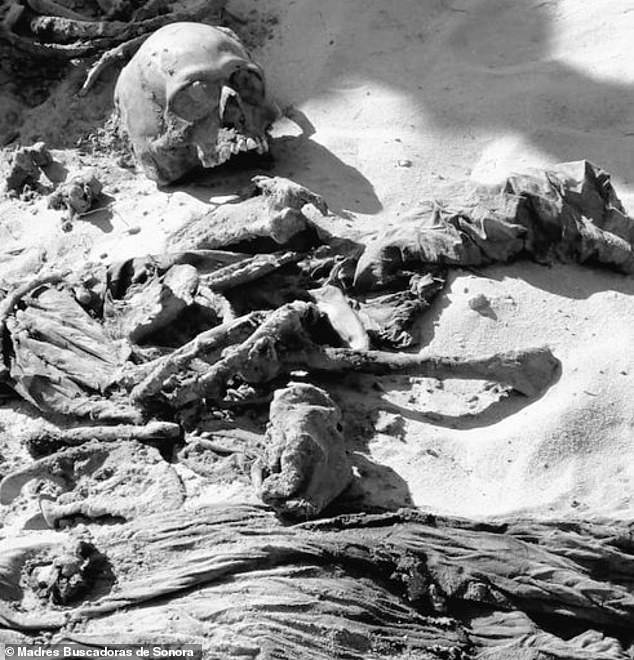 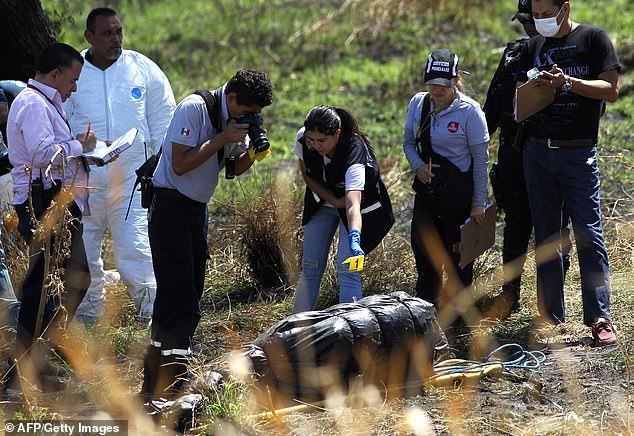 More than 6,600 bodies have been dug up from illegal hidden graves since December 2006, the government said.

Activists say Mexicans have disappeared at the hands of organized crime and the local and federal government, with the line between the groups often blurred.

Since the current administration took office in December 2018, one state – Jalisco – has accounted for almost 29 percent of the 1,682 bodies found in over 1,100 pits nationwide.

Such pits – often found in rural areas, but sometimes in suburbs of major cities – are frequently used by drug and kidnapping gangs to dispose of the bodies of rivals or victims.

The search for the missing has historically been led by mothers working in collectives to scour the country looking for lost loved ones. 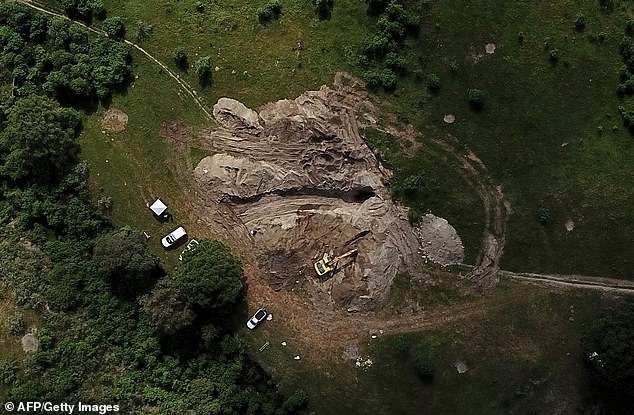 Aerial view of the zone where forensic experts were working using an excavator to dig in an old 30-meter well that was turned into a mass grave where more than 70 bags with human remains were found in Jalisco, Mexico, on September 10, 2019