MIDTERM ELECTIONS 2022: Follow DailyMail.com’s coverage on a tense night of elections – as voters line up to cast their vote in the final hours before the polls close

All 435 seats in the House of Representatives are up for grabs, as are 34 Senate seats and 36 governorships – in addition to a myriad of state and local roles.

Democrats have largely focused their campaigns on outrage over the Supreme Court’s reversal of Roe v. Wade and subsequent Republican-led efforts to curb abortion access. They’ve also ramped up warnings in the closing weeks that a GOP majority could pose a threat to democracy, given Donald Trump and his allies’ efforts to upend his 2020 election loss.

Republicans, meanwhile, have focused their campaigns on kitchen table issues such as the economy, inflation and rising crime rates. A growing number of Americans are discontent with the state of their pocketbooks, and the GOP has tied that to Biden and Democrats’ policies over the last two years.

Follow along with DailyMail.com’s live blog coverage of how tonight’s races play out:

Most voters disapprove of Biden’s handling of the country, new exit poll finds

An NBC News exit poll found that a majority of voters disapprove of President Joe Biden’s job leading the United States and 46 percent said his policies are hurting the country.

Just over a third of the critical Independent voter bloc said they think Biden’s policies are helping.

Biden’s low approval ratings for most of his term have been an albatross for vulnerable Democrats.

Like CNN’s exit polling, NBC found that inflation comes out on top of issues voters are concerned about with 32 percent, followed by 27 percent for abortion.

Some districts in Indiana and Kentucky have closed their polling places as of 6pm ET, and the first projected winners will start coming in soon. There are 11 House seats up for grabs across both states combined.

Early results from these races may determine momentum, but won’t be enough for a clear picture on where the night is heading.

Indiana GOP Senator Todd Young’s race against Democrat challenger has largely been kept out of the spotlight, mostly because Young’s seat is considered safe. 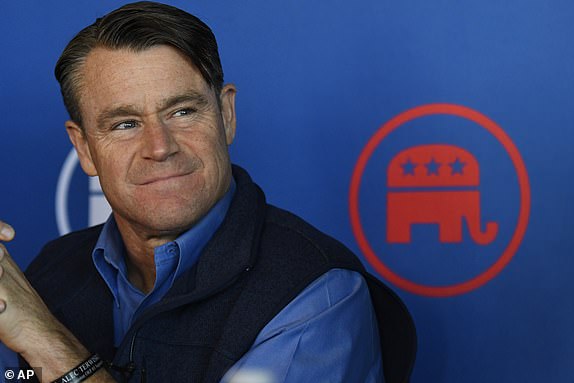 More than half of Americans who cast midterm ballots nationwide told exit pollsters that Donald Trump was not a factor in how they voted, CNN has reported.

That could be a good sign for Republicans in vulnerable areas if it means Democrat efforts to tie moderate GOPers to ‘MAGA extremists’ have failed.

Trump has played a heavy hand in the midterms this cycle, endorsing more than 300 candidates across local, state and federal races.

While election officials have tempered expectations for a full picture of midterm results tonight, two races in Virginia could be early warning signs for whether projections that have spelled doom for Democrats are likely to manifest.

The state’s polling places begin to close at 7pm ET, and generally produce results within hours.

It would foreshadow even greater political peril if Republicans manage to unseat Rep. Jennifer Wexton in Virginia’s 10th Congressional District, whose Cook Political Rating is D+6.

Luria and Spanberger both flipped their seats from red to blue and have touted themselves as moderates who reach across the aisle. But it remains to be seen whether they will be victims of nationwide discontent over Democrats’ handling of the economy and rising crime rates. 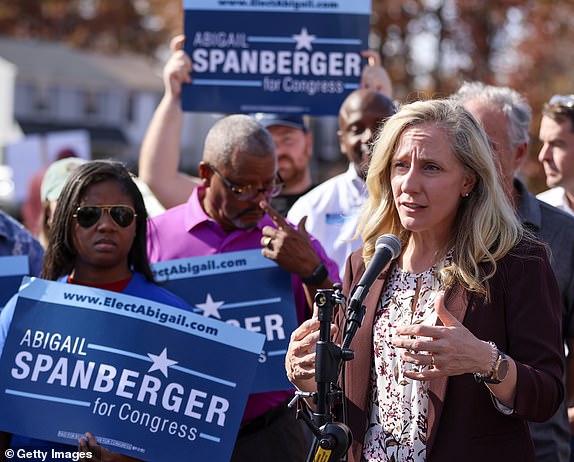 All three states have Democratic incumbents who are being challenged by Republicans backed by Donald Trump.

President Joe Biden expressed hope that his party could hold onto the Senate in comments to reporters on Monday night.

Below is DailyMail.com’s latest graph forecasting how the Senate will likely look next year: 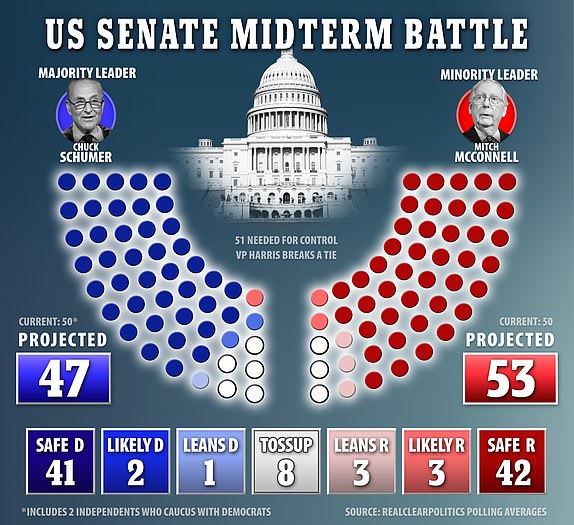 US voters are focused on inflation and abortion, initial exit polls show

The economy remains a top concern for American voters across the country, according to preliminary exit results published by CNN.

About a third of people polled said inflation was their biggest issue, followed by just over a quarter who named abortion as their main concern.

Those same voters, for the most part, are also unhappy with President Joe Biden’s stewardship of the United States and hold him largely responsible for the country’s issues.

It could be a bad sign for incumbent Democrats in tight races where discontent over nationwide issues could be taken out on their seats at the ballot box. 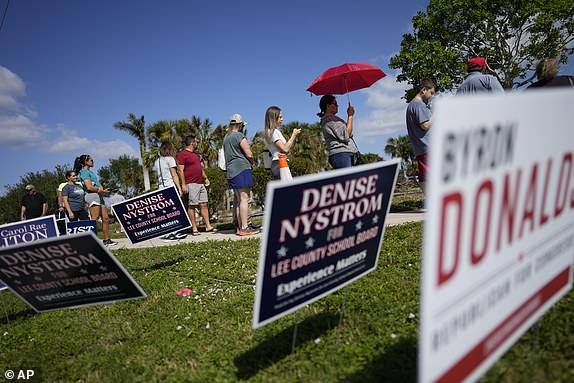 Donald Trump has made a series of posts on his Truth Social app casting doubt on the 2022 election results in Arizona, Michigan and Pennsylvania.

‘People of Arizona: Don’t get out of line until you cast your vote. They are trying to steal the election with bad Machines and DELAY. Don’t let it happen!’ Trump wrote.

He said there was a ‘REALLY BAD’ absentee ballot situation in Detroit and called on people to protest.

The ex-president also took aim at Pennsylvania officials’ warning of delayed results, ‘Pennsylvania just announced that it could take days to determine the winner. This is outrageous!’

The vote count got off to a bumpy start in the battleground state of Arizona, with 20 percent of voting machines in its most populous county hitting technical snags.

Maricopa County Board of Supervisors Chairman Bill Gates announced on Tuesday morning that machines were malfunctioning at about a fifth of their 223 polling places.

He said they were trying to fix it ‘as quickly as possible’ in a video posted to Twitter and explained the functioning backup system to ensure all votes are counted.

Still, that has not stopped some Republicans from using the malfunctions to sow doubt in the county’s election security. In a race expected to be as tight as Arizona’s, the Phoenix-anchored county will be pivotal to either side’s victory.

The White House called a lid before noon on Tuesday, meaning it’s highly unlikely that President Joe Biden will be heard from at all as polls wrap and the Election Day results gradually become clear as the night goes on.

It appears that he’s bucking the traditional post-midterms press conference that presidents usually give as well.

Biden’s apparent  lack of enthusiasm to engage over the vote tonight follows months of wariness of campaigning in critical battleground states like Arizona and Nevada. 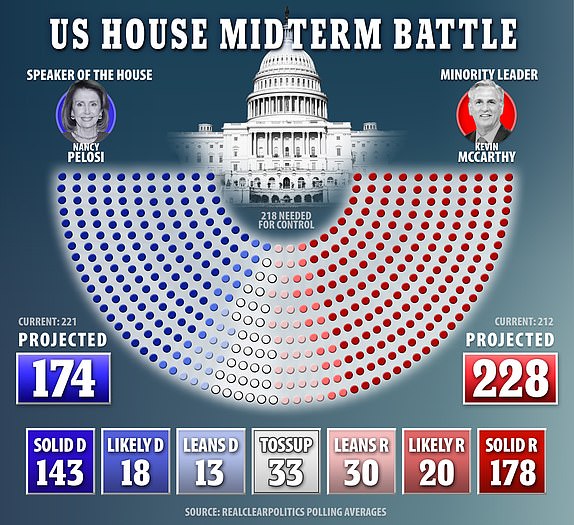 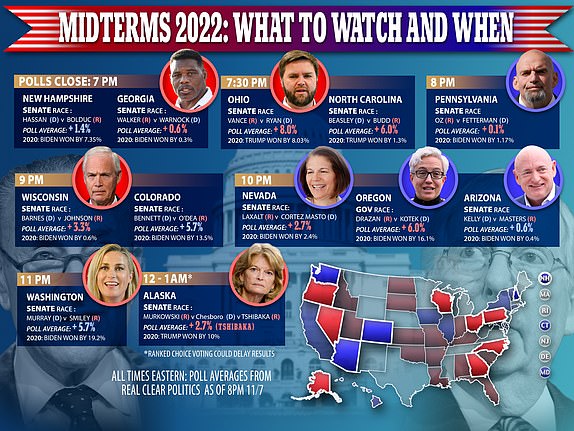 DailyMail.com will bring you the latest results and analysis as it comes in, as voters head to the polls to decide which party controls Congress for the latter half of President Joe Biden’s term.

As things stand right now, Republicans are poised to make big gains in the House of Representatives and are projected to pick up at least three seats in the Senate, according to RealClearPolitics’ calculation.

Biden expressed hope yesterday that Democrats could hold onto the Senate, likely propelled by fears over the state of democracy and abortion rights, and admitted it would be ‘more difficult’ to govern with Republican Congressional majorities.

Read DailyMail.com’s hour-by-hour of what to expect below