Migrant Channel crossings resume: More than 200 people including children wrapped in blankets and waterproof jackets arrive in Kent amid heatwave

Up to 50 migrants have crossed the English Channel in small boats today as people smugglers take advantage of the weather to reach the UK.

Scores have already brought in to Dover marina by a Border Force cutter this morning after being intercepted in the treacherous Dover Straits.

But more crossings in inflatables and RHiBs are expected with calm conditions expected all day and the rest of the week.

And according to Home Office figures 158 people including women and toddlers made the crossing on Sunday in four incidents.

It was one of the first crossings since a record-breaking 828 people had to be rescued or intercepted making the dangerous 21-mile journey in 30 boats on August 21.

It smashed the previous daily record of 592 arrivals set on August 12. 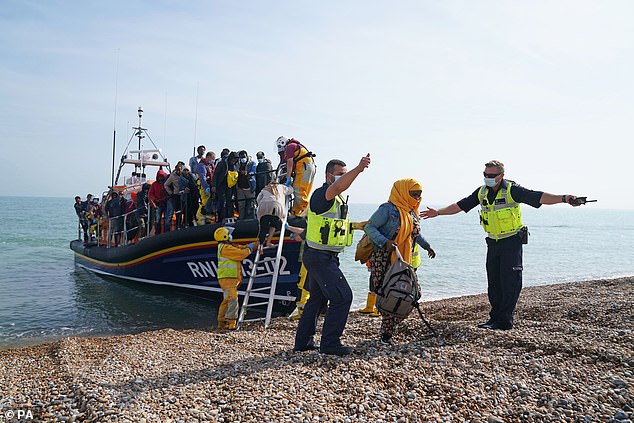 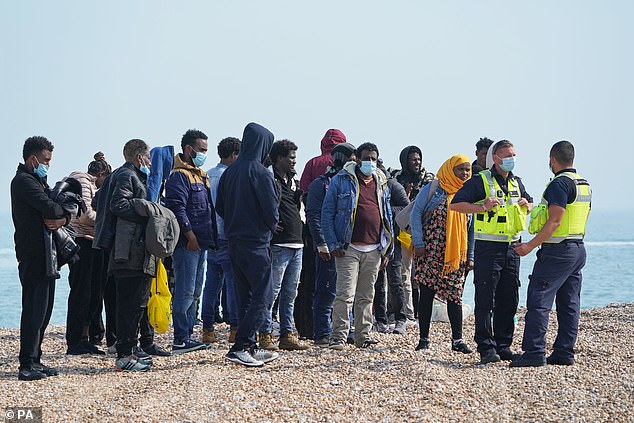 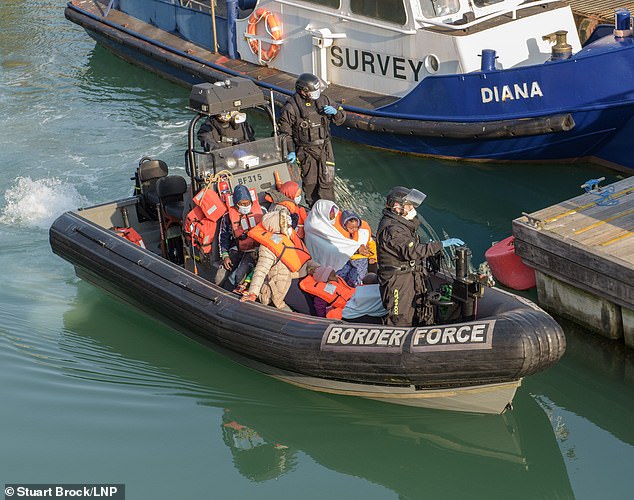 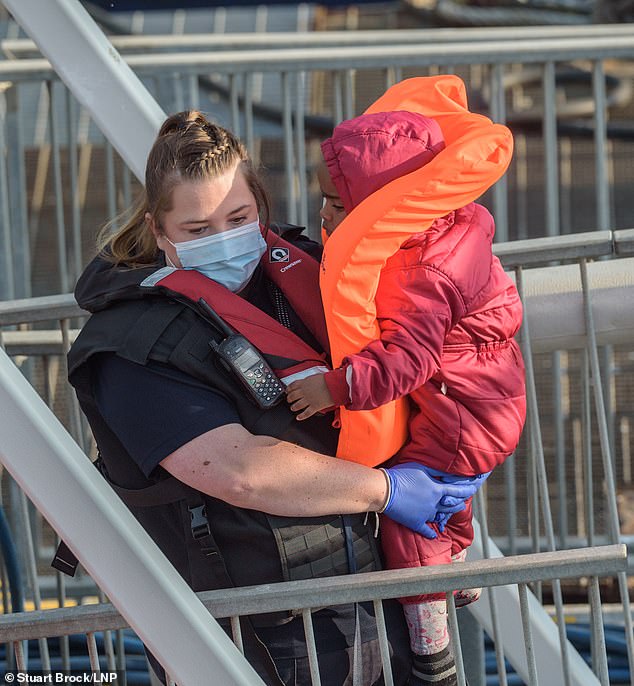 More than 12,000 migrants have now crossed the 21 mile treacherous stretch of water – the world’s busiest shipping routes, by boat this year.

Dan O’Mahoney, Clandestine Channel Threat Commander, said today: ‘This unacceptable rise in dangerous crossings is being driven by criminal gangs and a surge in illegal migration across Europe.

‘We’re determined to target the criminals at every level, so far, we have secured nearly 300 arrests, 65 convictions and prevented more than 10,000 migrant attempts.’

‘But there is more to do. The Government’s New Plan for Immigration is the only credible way to fix the broken asylum system, breaking the business model of criminal gangs and welcoming people through safe and legal routes.’

Five children were among 158 people who crossed the English Channel from France on Sunday, the first small boats arrivals for more than two weeks. 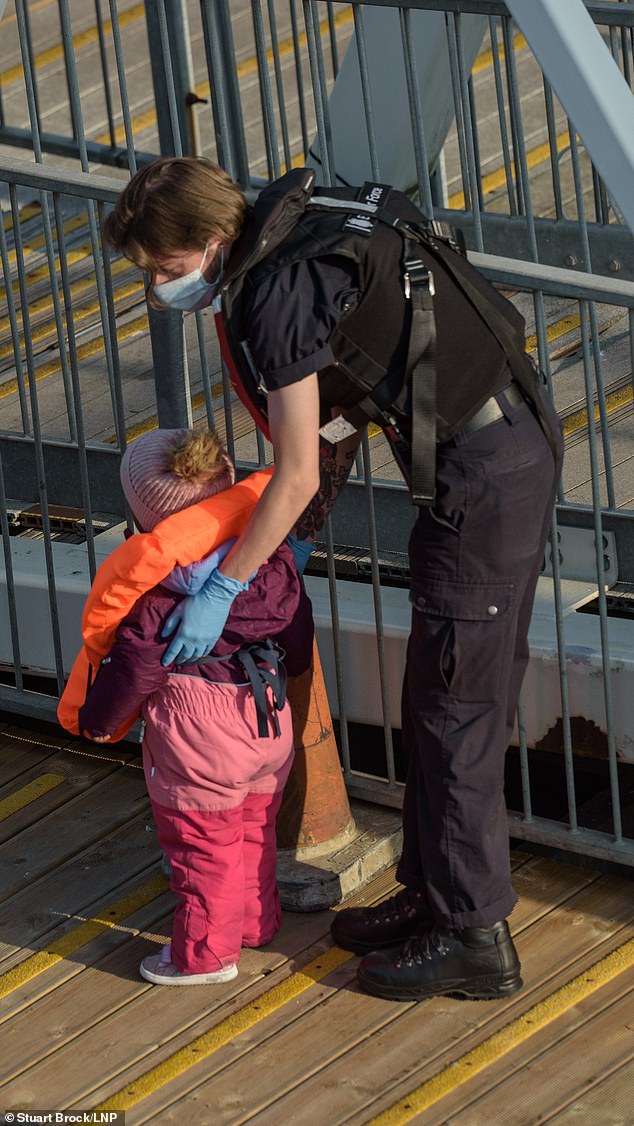 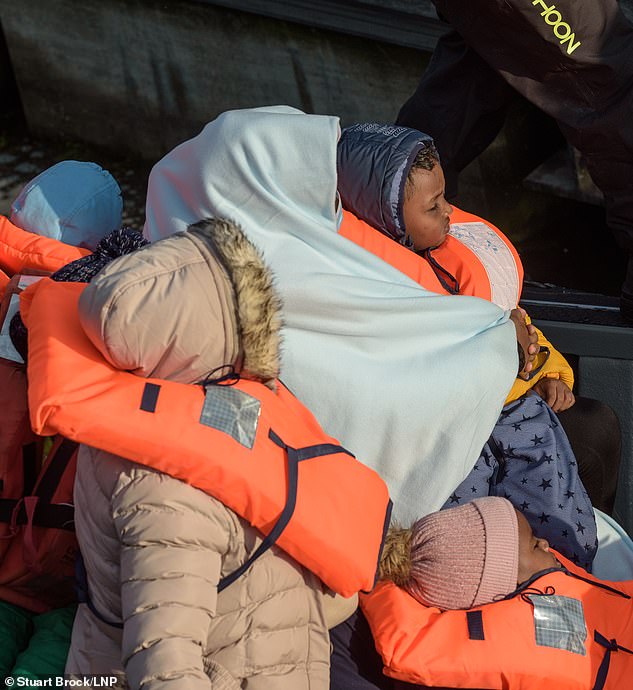 Crossings in 2021 have already eclipsed last year’s annual total of 8,417 and continues to rise

Four toddlers wrapped in hooded jackets and a baby being carried in an adult’s arms were seen arriving at the Kent port.

Crossings over the perilous Dover Strait – quiet for two weeks due to bad weather – have now resumed, with four boats arriving on Sunday and many thought to be attempting the journey on Monday morning.

Border Force and French authorities are again active in the Channel on Monday in what could be a busy day for migrant crossings.

Sunday’s arrivals brought the total number of people who have crossed to the UK aboard small boats this year to more than 12,500, according to data.

Crossings in 2021 have already eclipsed last year’s annual total of 8,417 and that tally continues to rise on fair weather days.

Despite this, the UK continues to see far fewer boat arrivals and asylum claims than many of its European counterparts.

In Dover on Sunday, a child’s cries were heard as they were helped ashore from a Border Force boat by immigration officials.

They were led up a gangway by staff and taken to the Home Office facility on the quayside.

Across the water, French authorities rescued a four-year-old child among 23 people on board an inflatable boat that had got into difficulty after suffering engine damage.