Migrants landing in Kent have been seen disappearing into cars and minivans after alerting smugglers of their whereabouts by dropping digital ‘pins’ on their phones, it emerged today.

Only a minority of dinghies make it to the English coastline, with the rest intercepted by Border Force or the RNLI in the Channel.

While some asylum seekers who land on beaches wait for officers to pick them up, others run away to avoid being captured and taken to Manston, a nearby processing centre.

Dover residents have described seeing cars driving ‘up and down’ along local roads waiting for new arrivals, with largest points waiting for vans at ‘pick-up points’. 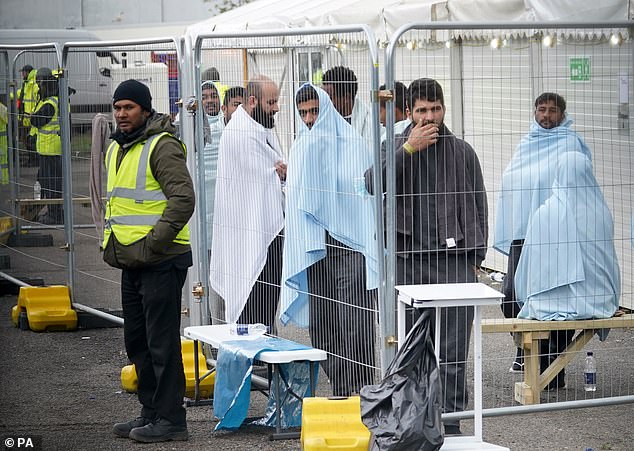 Only a minority of migrants make it to the English coastline, with the rest intercepted by Border Force or the RNLI in the Channel. Pictured is the scene at Manston yesterday

Charities warned this is likely to be evidence of human smuggling or trafficking networks operating in Britain, The Times reported.

The Refugee Council said: ‘We know from our work that trafficking and exploitation are serious problems and these reports are very worrying.’

Last month, 80 migrants landed on a beach in two boats, with 30 passengers unaccounted for a day later.

Sue Doyle, 59, described how a 16-year-old Albanian boy had come into her house and demanded to use her phone. The boy logged into his Facebook and sent his location to three contacts.

Before long, a blue Volkswagen Golf was seen ‘driving up and down, up and down’ the road, according to Ms Doyle’s neighbour, Louise Monger, 36.

Ms Monger said she was put on the phone to a man with an Albanian accent who ‘told me he’s a kid and basically can I try and get him into this vehicle’.

She informed the man she had phoned the police, who arrived to pick the boy up a short time later.

Another resident on Old Folkstone Road said they had seen minibuses picking migrants up ‘from the green, where the bus stop is’.

One in five Albanian men arriving in Dover are claiming to be children to boost their chances of avoiding deportation, immigration minister Robert Jenrick has revealed.

Unaccompanied children are more likely to be given asylum and less likely to be detained or deported if their claim is rejected.

He told the Telegraph: ‘At times, up to 20 per cent of the adult males who arrive at Western Jet Foil [reception centre in Dover] claim to be under 18. Clearly the number is substantially less than that.

‘We have already changed the law, to change the way in which those tests are administered, and if we need to make further legal changes, we will.’

Around 10,000 Albanian men have arrived in Britain after crossing the Channel this year.

A Home Office spokesman said: ‘Modern slavery is a barbaric crime and we remain committed to stamping it out and supporting genuine victims.

‘We are fully committed to clamping down on organised criminal gangs and people smugglers who are exploiting people for profit and putting lives at risk in the channel.’

Yesterday, it emerged that British immigration officers could be stationed in French control rooms for the first time under a new deal to curb Channel crossings.

The Government said the fresh agreement between the UK and France, understood to be worth about £80 million, is in its final stages.

This is expected to allow Border Force officers to observe French operations co-ordinating beach searches for boats being launched into the Channel and hunts for people trafficking gangs.

The money – which is the largest sum ever handed by the UK taxpayer to France – will also pay for an increase in the 800 daily patrols that are currently carried out by French officers, as well as more surveillance equipment to detect boats before the enter the water.

Downing Street said no timeline had been set on the discussions but declined to comment on any details that could be contained in the deal.

The Prime Minister’s official spokesman said: ‘There are still discussions ongoing so I can’t get into that sort of speculation at this stage,’ adding: ‘We will set out detail at the earliest opportunity.’

Rishi Sunak vowed to ‘grip this challenge of illegal migration’ by working with European nations when he attended Cop27, adding that he had ‘renewed confidence and optimism’.

The Prime Minister and French president Emmanuel Macron embraced at the UN climate change conference in Egypt on Monday during their first face-to-face encounter since Mr Sunak entered Number 10.

Work and Pensions Secretary Mel Stride hailed a ‘fundamental shift’ in the tone of relations between Britain and France as officials thrashed out the final details of the deal. 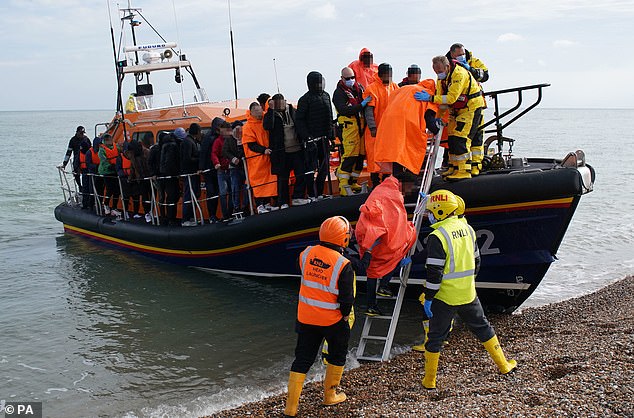 He told Sky News: ‘The mood music seems to be good at the moment.

‘My understanding is we’re in the final stages of what could be an agreement, which would be very good news.

‘I think there has been a fundamental shift in the tone between ourselves and the French.’

Almost 40,000 migrants have arrived in the UK after crossing the Channel so far this year. As yet there have been no crossings in November as bad weather continues, leaving the provisional total for 2022 to date still standing at 39,913.

It comes as a group of MPs who sit on the home affairs, women and equalities and human rights parliamentary committees visited the Manston migrant processing centre in Kent after concerns were raised about overcrowding.

Shortly after the delegation left yesterday, a man who shouted ‘help’ and claimed he had been at the site for 30 days was seen being pinned up against a fence and dragged away by security guards when he tried to speak to members of the press. 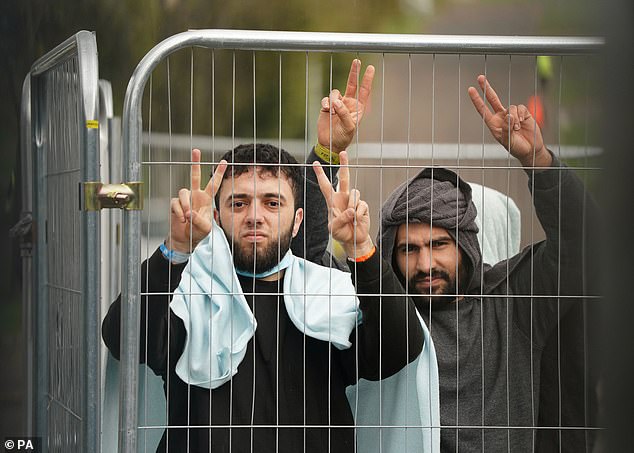 Immigration minister Robert Jenrick told the Commons on Monday that there had been a ‘significant reduction’ in the number of people at the site and this was now ‘back below’ its maximum capacity of 1,600 after more than 2,300 migrants were moved to other accommodation.

Earlier, an inquest heard the man suspected of firebombing another immigration facility last month died of asphyxiation. Andrew Leak was found dead at a nearby petrol station eight minutes after the terror attack at Western Jet Foil in Dover on October 30.

Meanwhile, Fenland District Council in Cambridgeshire has become the latest in a string of local authorities taking legal action in a bid to stop the Government from using a hotel to house asylum seekers.

East Riding of Yorkshire Council and Ipswich Borough Council are due at the High Court yesterday.