Multi-millionaire Glenn Tamplin, who is best friends with stars from The Only Way Is Essex, has been ordered to remove 15,000 tons of rubbish which has been dumped on the land of his £10 million Essex mansion.

The eccentric businessman, who made his money in the steel industry, has been told he has until November to get rid of the ‘mountain’ of waste at his house.

Neighbours living near to the extravagant mansion have complained about lorries dumping waste on the grounds of the property.

Aerial photos show huge piles of waste on the property, which is believed to have been dumped between December 2021 and February 2022. 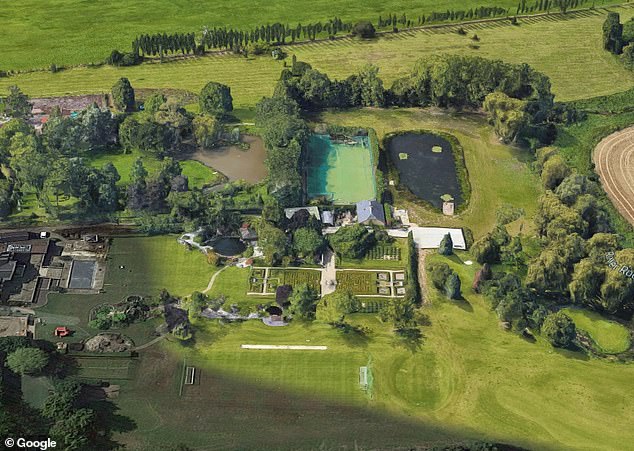 Glenn Tamplin has been ordered to remove 15,000 tons of waste which has been dumped on the land of his £10 million Essex mansion. The waste was seen dumped where the tennis court and pond can be seen on this image 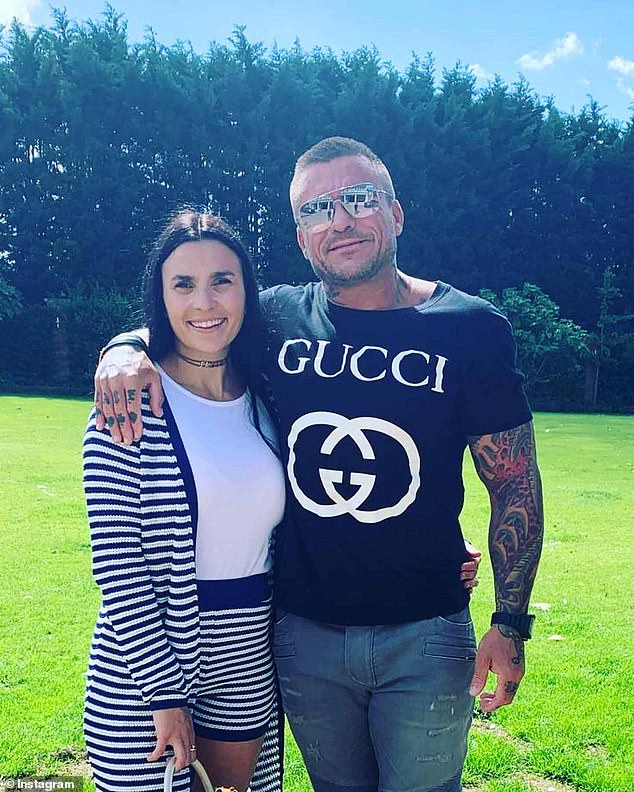 The 50-year-old steel tycoon, pictured here with his wife Bliss, has been given until November to clean up the property

Now the steel tycoon has been told to clean it up after Essex County Council served an enforcement notice on him earlier this month.

An investigation by the Environment Agency, Epping Forest District Council and Essex Fire and Rescue Service, found the large piles of rubbish are building waste and soils.

The 50-year-old, who is friends with TOWIE’s Mark Wright and Jake Hall, is no stranger to the limelight, having made headlines when he bought non-league football club Billericay Town FC.

During his time as owner he pumped in millions and signed ex-Premier League footballers such as Jamie O’Hara, Jermaine Pennant and Paul Konchesky. 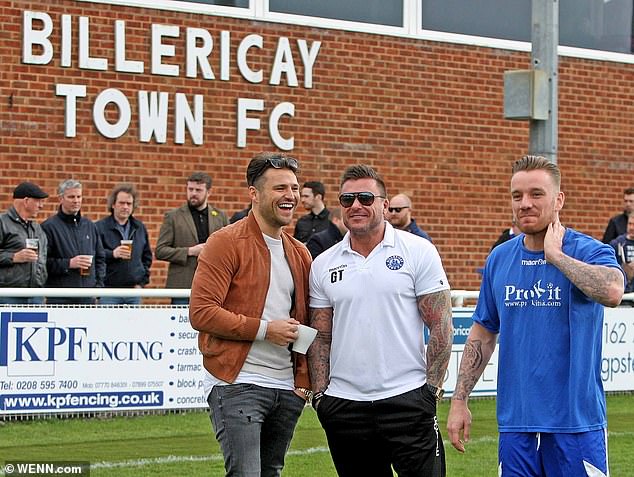 He later quit the club, before taking over at Romford FC, which he also quit following the Covid pandemic.

The Sun  reports  that neighbours haven’t seen Mr Tamplin at the property in months, while it was reported last year he had moved abroad.

One told the paper: ‘I could hear the lorries thundering past- it was about eight lorries per day at the worst point.

‘Someone was making a lot of money from what was going on in there. You could hear the machinery sifting through all the earth.’

Pictures show the gates to the mansion have been padlocked shut, while a notice from the council has been pinned to the gates.

A statement to Essex County Council’s development and regulation committee said: ‘The site itself comprises a large residential building which benefits from substantial grounds/gardens and a few outbuildings 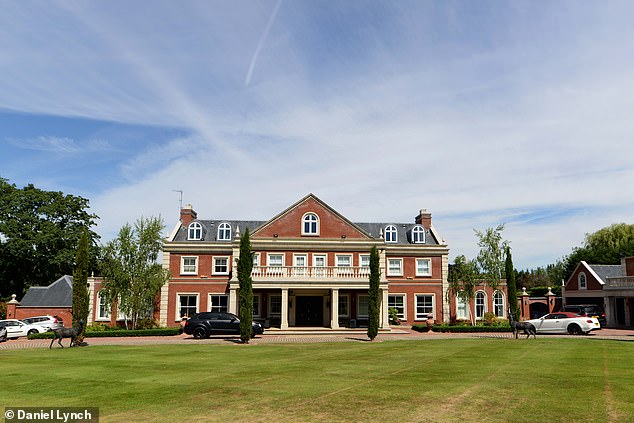 The £10 million Essex property is half-a-mile from the M25, although neighbours say they haven’t seen Mr Tamplin there for months

‘The property curtilage extends to approximately 5 hectares. In terms of designations, the property is located within the Metropolitan Green Belt as detailed within the Proposals Map of the Epping Forest District Local Plan (1998) and Alterations (2006).

‘With regard to planning history, as a residential property, the majority of planning applications relating to this site have been submitted to and determined by Epping Forest District Council.

‘For reference, it is nevertheless noted that in early 2014 the landowner and a waste company were prosecuted by the Environment Agency for the illegal deposit of waste at this site. 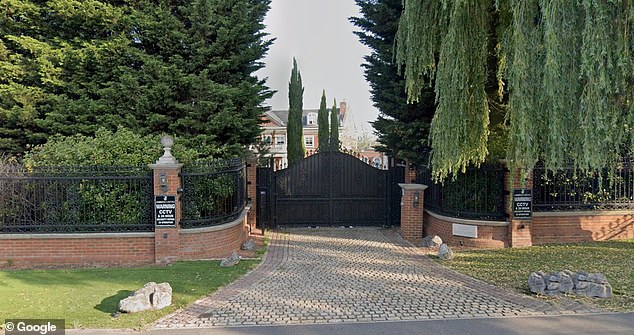 The gates to the property (pictured here) have been padlocked shut, with waste seen building up around them

‘Following a joint site inspection with the Environment Agency, Epping Forest District Council and Essex Fire & Rescue Service on the 29 March 2022, it was found that roughly 10,000 to 15,000 tons of waste had been deposited on the site, namely trommel fines and soils.

‘The waste it is understood had been brought on to the site between December 2021 and February 2022.

‘In context that the waste materials have been brought on to the site without the benefit of planning permission and that planning permission would not likely be granted in retrospect, on the 11 April 2022, Essex County Council as the Waste Planning Authority served an Enforcement Notice on the landowner and other relevant parties with interest in the land.’

It was reported last year that Mr Tamplin had abandoned the property and moved abroad. 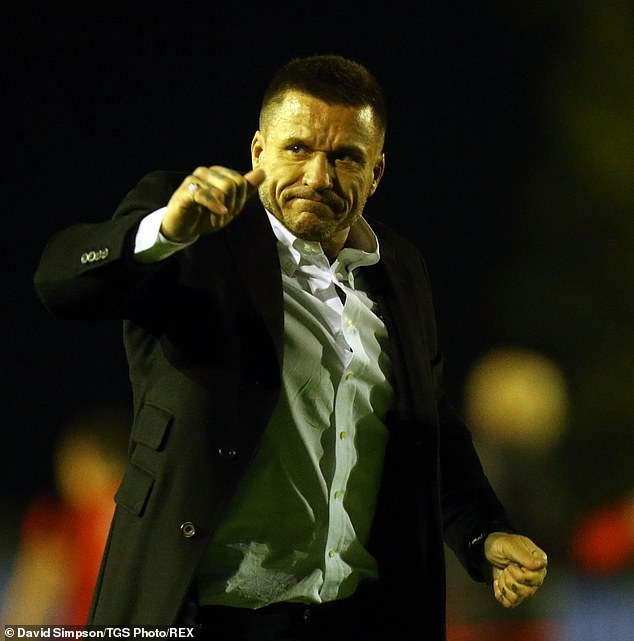 Mr Tamplin is no stranger to the limelight, having previously owned non-league football clubs Billericay Town and Romford FC, where he made himself manager (pictured)

This was confirmed when Romford FC, the non-league football club he owned and managed, announced he was no longer in charge.

He promised the Isthmian League club a new stadium and progress through the leagues but departed 16 months after arriving in March last year after Covid-19 took a heavy toll.

In a statement released at the time, Romford confirmed Mr Tmaplin was no longer the owner of the club, as he was ‘working and living abroad, and cannot devote the time required to push the club forward in the manner he wanted to’.

However, it appears he has since moved back to the UK, with his LinkedIn page listing himself as the CEO of European Steels.